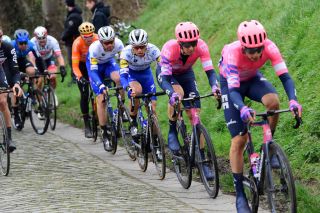 EF Pro Cycling have written to the UCI and race organisers RCS Sport in order to request withdrawal from Strade Bianche, Milan-San Remo and Tirreno-Adriatico, due to concerns about the Covid-19 coronavirus, according to a report in the Wall Street Journal on Tuesday.

RCS Sport announced on Monday that the races would go ahead as planned, despite the outbreak of the virus in several northern regions of Italy – in Lombardy, Tuscany and Veneto. Milan-San Remo starts in Lombardy, and Saturday's Strade Bianche is held in Tuscany.

The Wall Street Journal obtained a copy of the letter from the US WorldTour team, noting that neither the UCI nor RCS Sport were immediately available for comment.

According to the US newspaper, EF Pro Cycling cited US federal agency the Centers for Disease Control and Prevention's guidelines to Americans to avoid all non-essential travel to Italy, with the BBC reporting this week that the number of deaths there from the coronavirus has risen to 52.

As a result, the Italian government is also thought to be considering cancelling all sports events over the coming month to try to stem the spread of the virus, which would mean that the Italian races wouldn't go ahead anyway, despite RCS Sport's hopes this week that they would.

"We think it best to follow this advice and make all efforts to keep our staff and riders healthy and to help ensure they are not at risk of transmitting the virus," read EF Pro Cycling's letter, according to the Wall Street Journal.

"We will work closely with you if there is a plan to keep these races safe now. And we are also open to rescheduling the races in the future.

New cases reported on back of UAE Tour

Cycling became directly affected by the coronavirus last week when the UAE Tour, in the United Arab Emirates, was cancelled on Thursday with two stages still remaining due to two suspected cases of the coronavirus in two staff members of one of the teams taking part.

Riders, team staff, race organisers and the media at the race were all subsequently confined to their hotels in Abu Dhabi for testing, and while most were allowed to return home after being confirmed negative, four teams – Cofidis, Groupama-FDJ, Gazprom-RusVelo and UAE Team Emirates – remained at their hotel for further testing, with UAE Team Emirates doing so voluntarily.

On Tuesday, however, the UAE Ministry of Health and Prevention announced that six people connected to the race had tested positive for the virus. As a result, it appeared that those still at the Crowne Plaza Abu Dhabi Yas Island hotel would undergo further testing.

"The six individuals diagnosed with the new coronavirus include two Russians, two Italians, one German and one Colombian," read a statement from the UAE Ministry of Health and Prevention on Tuesday. "The patients were connected to the two previously announced cases associated with the cycling event, the UAE Tour."

With further race cancellations now seeming likely, and with EF Pro Cycling requesting their non-participation in the upcoming Italian races, professional cycling may become significantly more affected over the coming weeks and months.

Cyclingnews has contacted EF Pro Cycling for further comment on their request not to attend the Italian spring races.