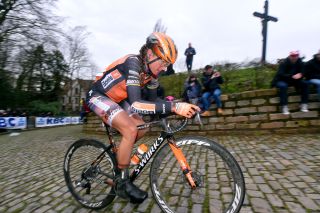 Mitchelton-Scott's Annemiek van Vleuten landed the first blow of the spring Classics campaign at the Omloop Het Nieuwsblad on Saturday, but, despite the severity of it, rival team Boels Dolmans refuse to be intimidated by the road race world champion.

In her first race since winning the world title with a 100km solo ride in Yorkshire, in the UK, last September, Van Vleuten dispatched her rivals with a fierce acceleration on the Muur van Geraardsbergen before soloing into the finish in Ninove.

"It's no surprise she did that. She was just on a level you can expect Annemiek to be on, and that's a little bit better than the rest," said Boels Dolmans team manager Danny Stam, whose best finisher was Chantal Blaak in fourth place.

That said, Van Vleuten herself noted her tendency for slow starts to the season and voiced her surprise at the manner of her performance, if not the victory itself.

"I don't know about that," Stam countered. "Last year she won Strade Bianche, and that's only a week later. It's just when you have a really hard race, you can always see she's one of the best riders, and she showed that again."

Van Vleuten racked up an eye-watering number of training kilometres over the winter, across training camps in Colombia and even with the Mitchelton-Scott men's team. Her aim was to start the season strong and target the spring Classics like never before.

Her victory on Saturday was a big statement of intent, but Stam refused to accept the tone had been set for the spring as a whole.

"We are one race down. Whether she'll dominate, it's difficult to say. It's possible – she has the talent for it, the character for it, trains hard enough for it – but in a couple of weeks, we'll know what's going on," he said.

"It was a nice win but last year Chantal Blaak won this race and actually the rest of her season wasn't that good. It's not that if you win the Omloop you're then outstanding for the rest of the season," Stam said. "It's possible, but we'll see."

Van Vleuten in this form does, however, present Boels Dolmans with a headache. Although it must be pointed out that Mitchelton-Scott had numbers in the main selection at the Omloop, Van Vleuten looks to be the strongest individual, while Boels Dolmans will resume their status as the collective with the widest selection of options.

"I'm not going to plan only for Annemiek, just because she won Het Nieuwsblad," Stam said.

"She's going to be good. It's been a couple of seasons already that she's been good, and when she targets the races she wants to win, you know she's really good. It [Omloop] was a great effort – she was outstanding – but next week is another week. She's beatable – everyone's beatable."

"She should have been here, but is sick. It was a big miss for us that she couldn't race here," Stam said.

"Hopefully she's getting better quickly and we can use her for the next races. If she's fit again, she'll do Strade Bianche and the full spring season, with the main goal being the three Ardennes Classics."

With Amy Pieters, Amalie Dideriksen, and Jolien D'Hoore all still to come back into the fold, there is ample room for optimism.

"I was pretty happy with the team and how they worked," Stam said of Saturday's race, where Jip van den Bos also made the top 10. "We had four riders in the break, and I saw some girls from the second group making a step up. For me, that's good for the future and the next races coming up.

"We'll just keep racing how we want to race. We have only done one race," he continued, with the team not being one of those that took part in Sunday's Omloop van het Hageland. "You can't forget what Anna van der Breggen and Chantal Blaak have won in the past. I hope they come back at a great level, too."