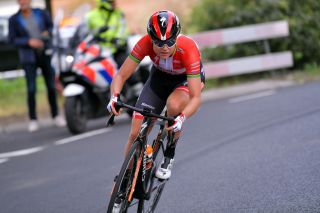 The road racing season may have already begun, with the first Women's WorldTour race, the Cadel Evans Great Ocean Road Race, in Australia, over and done with, but the main goals of the 2020 calendar – races like the spring Classics and the Giro Rosa – are still several months away.

For a selection of multi-disciplinarians, however, the first major objective of the season is almost upon them. The UCI Track World Championships, being held in Berlin, Germany, are just a week away, and for Amalie Dideriksen of Boels Dolmans, the world road race champion in 2016, it's a major step towards her main goal of 2020 – the Tokyo Olympics.

"This year, the Olympics will be a big focus for me, and my dream is to take a medal," the current Danish road race champion tells Cyclingnews, speaking at the Boels Dolmans training camp in January.

"I'll race on the track. We still have to compete the qualification and be selected to ride, but that is definitely the dream."

Dideriksen: I struggled to live up to expectations after Worlds win

Dideriksen raced her first Olympics in Rio four years ago, taking fifth in the Omnium at the age of 20. With the Madison introduced to the programme for 2020 – having been cut from the men's schedule in 2008, and never having featured as a women's event before – it means that there's another chance at a medal for her come early August.

"My goals are the Omnium and the Madison," says Dideriksen. "I did the Omnium in 2016 in Rio, and we came fifth, so we want to improve on that. Now, it's a bit of a different format, going from six to four events, and from two days to one.

"Of course, the Madison has been added to the programme, so I think that's really exciting for us."

At last year's Track Worlds, held in Pruszków, Poland, Dideriksen and partner Julie Leth took bronze in the event, while Dideriksen has experienced success at the Worlds dating back to her time as a junior. In 2014, she won the junior Scratch Race, while in 2018 she took her first elite medal: a silver in the Omnium.

This time around, she'll race both events again, resuming her European Championship-winning Madison partnership with Leth. And with four Track World Cup rounds in Asia, Oceania and North America coming in the past several months, the Worlds will be her first major track race since the second round of the World Cup in Glasgow in early November.

"The first World Cup rounds were in Europe, close to home, and then they were in Hong Kong, Australia and New Zealand, so if you can avoid those long trips, it's nice.

"At the Danish federation we decided only to do three World Cups, which is the minimum ­– points-wise – towards the Olympics, so we did that," explains Dideriksen, who didn't attend round 3 in Hong Kong, where Leth raced the Omnium and won the Madison alongside Trine Schmidt.

After the Track Worlds, Dideriksen will turn her attention to the road, before building up for her Olympic track disciplines once more.

"I don't know my road programme yet, but hopefully, after the Track Worlds, I can do one-and-a-half weeks of road training and start the road season in March. Then I'll continue for a while and take a slight break before the final run-up towards Tokyo," she explains.

It's a route through the year that will be taken by numerous others, including her own trade teammate Amy Pieters, who won Madison gold with Kirsten Wild at last year's Worlds for the Netherlands.

Combining road and track is not just tolerated but encouraged at Boels, and the mixing of disciplines, which Dideriksen has done since her youth, is something she wants to continue into the future.

"I've done both road and track since I was a little girl and I've just continued since," she says. "I was included in the national team very early on and started qualification for Rio as a junior.

"For now, I would like to continue doing both road and track. I don't know how things will look after Tokyo, how the whole track system will be with the change to a summer sport, so I'll have to look into that. Right now, I'm focused on Tokyo and I'll take the rest as it comes."