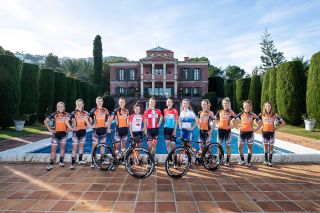 Boels Dolmans have been the number one ranked team in the world for the past five seasons and one of the few world-class women’s teams not attached to a men’s WorldTour programme. Team manager Danny Stam has a stated goal of remaining independent, even in a search for new financial backers as Boels Rental and Dolmans are set to end sponsorship in 2020.

The programme has boasted the top riders in the sport and won the elite women's road race World Championships for four consecutive years: Lizzie Deignan (2015), Amalie Dideriksen (2016), Chantal Blaak (2017) and Anna van der Breggen (2018). However, as the sport implements a new two-tier team structure this year, Boels Dolmans will not be among the eight top-tier WorldTeams because they could not provide a sponsorship guarantee of four years.

Compared to the three previous seasons where Boels Dolmans scored 38 wins in 2016, and 28 wins in both 2017 and 2018, last year left something to be desired with only 18 victories.

Those achievements were enough to win the Women’s WorldTour team competition and lead the UCI World Ranking for a fourth consecutive season. The team will head into the 2020 season as the top-ranked team for a fifth year in a row.

Anna van der Breggen - She was once again the team’s top performer last year bringing in five of the team’s WorldTour victories. She secured a fifth consecutive win at Flèche Wallonne before going on to win a stage and the overall title at Tour of California, a stage of the Giro Rosa and GP de Plouay. Boels Dolmans have heavily relied on her success since she joined the team 2017 but she is often willing to play a key support role for her teammates as well. Look for her to once again dominate the one-day races and stage races in 2020, and to defend her gold medal at the Olympic Games in Tokyo.

Jolien D’hoore - Boels Dolmans spent years courting D’hoore and she finally signed a contract to race for the team for the 2019 season bolstering the team’s Classics squad. Her spring campaign was derailed by a broken collarbone but she came back to win a stage of Emakumeen Bira, and two stages at OVO Energy Women’s Tour. Coming into 2020 healthy, look for D’hoore to showcase in the cobbled Classics and the fast finishes, while continuing to represent her nation on the track.

Christine Majerus - A staple support rider on the Boels Dolmans team, Majerus had a stand-out season last year capturing her own victories in the time trial and road race at the Luxembourg Championships, the overall title at the Boels Ladies Tour and the GP International d’Isbergues-Pas de Calais Feminin. She will once again provide the team with experience as an on-road captain and support in all of the major races.

Chantal Blaak - A rider who should never be underestimated, Blaak is one of the strongest one-day riders in the peloton. She is a former world champion who has also won Amstel Gold Race, Gent-Wevelgem and Ronde van Drenthe. Look for Blaak to have strong performances in the Classics this spring while providing a support role in the stage races later in the summer.

Boels Dolmans have riders who can win on any given day and on any given terrain. Inside the team, individual riders such as Anna van der Breggen embody such versatility that she can win anything from the Ardennes Classics to the Giro Rosa, and any other race on the WorldTour. The team have a roster with so many cards to play, and riders with so much experience, that they can often afford to change tactics during a race in order to pursue a more favourable outcome.

It’s a stretch to find a weakness for the Boels Dolmans team but due to their future sponsorship insecurity they won’t be part of the new top-tier of teams in 2020. As such, the team will not receive automatic invitations to WorldTour events like the eight top-level squads. They will instead rely on invitations from organisers, which shouldn't be a problem since they will no doubt be among the best teams in the world ranking regardless of their licence status.

As the eight WorldTeams make their mark on the new structure of women’s professional cycling, build stronger rosters, gain heightened status and hopefully sponsorship contracts, Boels Dolmans has already fallen a year behind in that race.

Boels Dolmans have been the most successful women's team in recent history and even though they will not be among the new WorldTeams in 2020, we expect them to continue their dominant fashion on the world-class stage of women’s bike racing.

The core of the team remains unchanged and will once again rely heavily on Van der Breggen throughout the bulk of the calendar, but she isn’t the only champion on the team. They will also have cards to play in the sprints and cobbled Classics with D'Hoore, Blaak, Dideriksen and Amy Pieters, in the mountains with Katie Hall, and flatter stage races with Majerus. The team also remain committed to developing future champions in Van den Bos, Uneken, Buurman and Schneider.

All they need now is the security of a future financial backer that will take them beyond 2020.