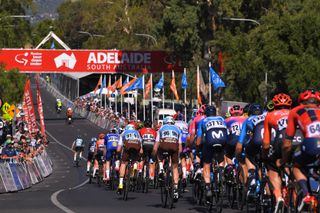 Riders at the 2019 Down Under Classic in Adelaide, South Australia, which in 2020 will host the final round of the National Crit Series during the Tour Down Under (Image credit: Getty Images)

The third and final round of Australia's 2019/20 National Criterium Series will be held in Adelaide on the evening of January 25, following the penultimate stage of the men's Tour Down Under.

Tour Down Under: A beginner's guide

As part of a first-time collaboration between the organisers of the WorldTour stage race and Cycling South Australia, the Night Riders event – featuring elite men's and women's races – will begin at 5.30pm and finish around 8.30pm, with the festivities continuing afterwards at the nearby City of Adelaide Tour Village, which will be situated on Victoria Square for the entirety of the Tour Down Under.

The central Adelaide, kilometre-long circuit will use parts of the course that will already have been used for the final stage of the Women's Tour Down Under and the Schwalbe Classic on January 19 – the latter pitting the men's TDU field against each other ahead of stage 1 of the stage race on January 21 – using the same start/finish line on Flinders Street.

"The inaugural year of the National Criterium Series in 2018 was a fantastic start with the inner-city locations bringing the sport closer to the fans," said Kipp Kaufmann, Cycling Australia's General Manager - Sport, in a press release.

"The addition of Night Riders, as part of the Tour Down Under, will see the series placed alongside Australia's legendary criterium races. With the ability of these events to attract some of the world's best riders, we look forward to hosting another exciting year of the series."

The opening race of the series – the Stan Siejka Launceston Cycling Classic – takes place on a circuit around Launceston's City Park on December 8, with the well-established Tasmanian race attracting huge crowds, who have in the past been able to watch the likes of three-time Tour de France stage winner Caleb Ewan and four-time Tour de France champion Chris Froome on the circuit, with the latter taking part while visiting his friend and now former teammate Richie Porte in Tasmania in 2014.

The following week sees the series move to Melbourne for round 2 at the popular Shimano Super Crit ahead of a Christmas/new year break before the third and deciding round in Adelaide for the inaugural Night Riders event on the evening of January 25, after which the overall winners of the series will be crowned.

Earlier the same afternoon, stage 5 of the Tour Down Under will have finished in Victor Harbor, with the sixth and final stage of the race finishing on Willunga Hill the next day.