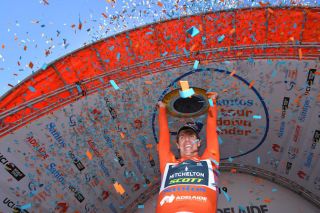 Daryl Impey (Mitchelton-Scott) wins the overall classification at the 2019 Tour Down Under (Image credit: Getty Images)

With the European season winding down for another year, it's already time to start dreaming about Australia's 'summer of cycling', which includes the men's 2020 WorldTour opener, the Tour Down Under.

The stage race saw the light of day in 1999, and grew in stature until 2008, when it was awarded UCI ProTour (now WorldTour) status, which raised it to the upper echelons of professional cycling, attracting some of the world's biggest teams and their star riders, all keen to enjoy some warm-weather racing and training ahead of the start of the European season.

Over the years, it has attracted world champions, Grand Tour champions and, perhaps most importantly, has launched the careers of a number of young riders. A then 19-year-old Peter Sagan raced here in 2011, taking a third and fourth place on two of the stages, before going on to win three world championship road race titles, and has been the star turn at the Tour Down Under for the last three years in a row.

Last year's Tour de France winner, Geraint Thomas, was also at the 2011 race, while up-and-coming French star Romain Bardet is expected to make his Tour Down Under debut with his AG2R La Mondiale team in 2020.

Bardet plans to return to racing at 2020 Tour Down Under

Spratt wins 2019 Women's Tour Down Under

Impey takes his second Tour Down Under title in a row

5 conclusions from the 2019 Tour Down Under

When and where is the Tour Down Under held?

The Tour Down Under is held in the middle of January in Adelaide – the state capital of South Australia. The race is run out of the Hilton Adelaide hotel in the centre of town, with stage starts and finishes normally within an hour of the race HQ. All the riders for the men's event stay at the hotel, while a race village is set up across the road in Victoria Square, where all the teams' cars and bikes are based for the week, while the other half of the square is given over to bicycle companies to show off their wares and host the cyclists for evening events.

It's also where the team presentations are held ahead of the start of the race, with big-name musical acts performing the same evening, all contributing to a festival atmosphere, attracting thousands of fans – many of them with their bikes – from interstate and abroad.

Why is the race held at the hottest time of the year?

With temperatures often reaching well over 40°C and sometimes closer to 50°C, stages have often had to be shortened to meet the UCI's Extreme Weather Protocol. But race director Mike Turtur says the dates of the race aren't about to be changed any time soon; the race is held during Australia's school summer holidays in order to attract spectators – just as the Tour de France is held during the school holidays in Europe.

With several other festivals taking place in Adelaide during January and February, visitors to the city are out in force, with many enjoying a visit to the spectator-friendly Tour Down Under.

The Tour Down Under starts with a pre-race criterium around the central-Adelaide streets, which allows the visiting international riders an opportunity to stretch their legs and kick over their racing minds after the off-season.

Two days later, the first stage proper of the six stages often favours the sprinters. But with undulating roads, the hot summer weather and strong coastal winds all factors to consider, a 150km stage of the Tour Down Under can often be tougher than the race book suggests.

As bonus seconds are often the difference between first and 21st on the opening stages, bonifications are an important factor on the stages and are like gold for the riders, who are keen on grabbing their first UCI points of the season and impressing what are sometimes new employers.

The Willunga Hill stage has proven to be a hit with both fans and riders and is the 'queen stage' of the race, offering one of only a few real climbing tests of the race, and usually deciding the GC.

In recent years, the climb – some 50km south of Adelaide, close to the wine-growing area of McLaren Vale – has featured on the penultimate stage of the race, before the final day's city criterium. However, in 2019 the climb was 'moved' so that it featured on the route on the final stage, ensuring suspense until the last day.

Overall, the Tour Down Under dishes up aggressive racing on short, but often challenging, stages that offer something for everyone: sprinters, puncheurs, climbers and breakaway specialists alike.

Who are the contenders for the Tour Down Under?

The Tour Down Under parcours has changed over the last few years, having initially favoured the sprinters, with past winners including the likes of Stuart O'Grady, Allan Davis and André Greipel, with the latter still holding the stage-win record with 18.

The addition of Willunga Hill to the route has all but extinguished the hopes of the sprinters claiming an overall victory. However, South African all-rounder Daryl Impey (Mitchelton-Scott) became the first rider to defend his title in 2019, winning the race overall by just about clinging on – or finishing close enough – to six-time Willunga Hill stage winner Richie Porte (Trek-Segafredo), who used his climbing skills to win the race overall in 2017.

It's always a close race, with bonus seconds for the stage winners, and the intermediate sprints along the way, deciding the winner, but these days it still just about favours the climbers. Impey has proven himself capable of getting over the South Australian hills in close proximity to the best of them, and has a fast finish to ensure that he picks up bonus seconds to make up the difference.

What colours are the leaders' jerseys?

The leader of the Tour Down Under wears the ochre jersey in a nod to the colour of the South Australian soil. A white and blue polka-dot jersey is awarded to the king of the mountains, a blue jersey for the sprint classification, and a white jersey for the best young rider.

What is unique about the Tour Down Under?

Australian cycling fans are privileged to have the Tour Down Under on their doorstep, with the riders relaxed and happy enough at the start of their seasons to chat and take 'selfies' with fans, and to cuddle koalas, joeys (baby kangaroos) and snakes as photo opportunities for the press – and for their own enjoyment.

Some of the stages take place close enough to the Hilton for spectators to ride their bikes out to, with the pro riders often choosing to ride back to the hotel for some extra training, too, which means the opportunity to – carefully – share the roads with some of the biggest names in the sport.

As the first major race on the calendar, fans also have the opportunity to see new bikes and team kit in the flesh for the first time, and the 2020 edition will be no exception, with Cyclingnews on hand to spot the very best of it for you if you're not able to make it yourself.

Next year's women's race runs from January 16-19, while the men's race begins with the Schwalbe Classic on January 19, and then continues with the stage race from January 21-26. Cyclingnews will once again provide news, interviews and in-depth tech news from the 2020 race, as well as live text coverage, results, reports and analysis for every stage.