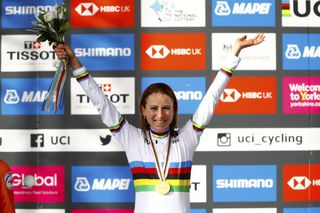 World champions Annemiek van Vleuten and Chloe Dygert were both extremely pleased with the UCI's confirmation that the re-located 2020 Road World Championships would be held from September 24-27 in Imola, Italy.

Van Veuten, the reigning elite women's road race world champion, told Cyclingnews that she felt both relieved to know where the event would take place and pleased that the sport governing body held its promise to honour the mountainous route design that was planned for the original road race course in Aigle-Martigny, Switzerland.

"I'm happy to know where it will be," Van Vleuten told Cyclingnews. "A hard course makes me also happy."

Van Vleuten is a two-time time trial world champion (2017 and 2018) and the reigning road race world champion after winning the title in Yorkshire last September. She won the road race ahead of compatriot Anna van der Breggen and Australia's Amanda Spratt after an audacious 105km solo attack. She has raced for Mitchelton-Scott for the last five years but will be moving over to the Movistar Team Women in 2021 and 2022.

US rider Dygert won the elite women's time trial world title after a dominant performance in Yorkshire that saw her beat Dutch riders Van der Breggen and Van Vleuten. She was also pleased that the location has been secured for this year's World Championships, although she said that the new location does not change her plans to defend her time trial title. She is confirmed to race the time trial and road race in Imola.

"I'm happy that a final decision has been made – nothing changes on my end – and I'll continue with my well-laid-out training plan and preparation," Dygert told Cyclingnews.

The UCI confirmed that the men's 259.2km race will include over 5,000m of climbing and include nine laps of a 28.8km circuit. The women's race will cover 144km with 2,750m of climbing over five laps. The time trials will be on flat course, with all races finishing on the famous motor-racing circuit.

The UCI announced earlier this month that the Road World Championships in Aigle-Martigny had been cancelled due to government-enforced COVID-19 restrictions on public gatherings, but that they hoped to find a new location in Europe for at least some of the races. The event was originally scheduled to be held from September 20-27.

Imola emerged as a frontrunner to host the event after a bidding war that also included the Department of Haute-Saône at La Planche des Belles Filles climb in the eastern Vosges mountains of France, and Valdera in the Tuscany region of Italy.

The UCI confirmed on Tuesday that Imola, located in the central Emilia-Romagna region, had won the bid for the World Championships, but that the programme would be reduced to just four days and host only the elite men's and women's road races and time trials. The junior men's and women's, and under-23 men's, world titles will not be awarded in 2020.

It has been reported that the Imola motor-racing circuit will host the start and finish of the races, and make use of the existing infrastructure to hold the race headquarters, while the pit-lane boxes and paddock area would allow for COVID-19 protocols for social-distancing between national teams. In addition, limited crowds could even be allowed to watch the racing from the grandstands.