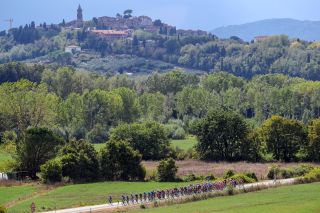 Organisers of the Giro della Toscana and Coppa Sabatini announced Tuesday that they have placed a bid to host all of the events and categories of the 2020 UCI Road World Championships from September 20-27 in the region of Valdera, located in the Province of Pisa in Tuscany, Italy. Unione Ciclistica Pecciolese confirmed that they are willing to meet with the UCI to negotiate the terms of hosting the eight-day event and discuss the routes details.

The UCI confirmed last week that the Road World Championships in Aigle-Martigny, Switzerland had been cancelled due to government-enforced COVID-19 restrictions on gatherings but that they hoped to find a new location in Europe for at least some of the races.

"After Switzerland's renunciation, the 2020 World Road Cycling Championships are momentarily without a venue. Also Valdera, a large and green area of Tuscany, wants to apply to organize the World Championships 2020," said Luca Di Sandro, president of the Unione Ciclistica Pecciolese, in a press statement.

"The promoting cities are mainly Peccioli, well known in the cycling world because every year it hosts the Coppa Sabatini, and the industrious Pontedera, now the traditional venue of the Giro della Toscana. These are the classic [routes] used for the Challenge Alfredo Martini, organised by the Unione Ciclistica Pecciolese."

Giro della Toscana is scheduled to take place on September 16 followed by Gran Premio Città di Peccioli - Coppa Sabatini on September 17. Organisers will be announcing new routes for the two events, along with participating teams, on September 3.

Unione Ciclistica Pecciolese confirmed that they are prepared to host all of the events for the World Championships, including the time trials in the Valdera region.

"We are very willing to sit down at the negotiating table with the International Cycling Union and the institutions involved. Our territory offers numerous solutions regarding the routes," Di Sandro said.

Renzo Macelloni, Mayor of Peccioli, said the Valdera region was a perfect location to present an event the size of the World Championships because of its capabilities in hosting large numbers of tourists with many hotels and facilities. It offers convenient travel because there is an international airport in Pisa, which is a 20-minute drive from Peccioli and a 10-minute drive from Pontedera.

"The receptivity is guaranteed," said Macelloni. "We are hospitable and everyone knows it, and the World Championships can also act as a flywheel to acquire a new target of tourists who love the sea and the hills. Our Valdera, with its hills and works of art, is like a permanent postcard."

Macelloni confirmed that the Valdera location, particularly the starting area for Coppa Sabatini, is capable of hosting the logistical functions surrounding the World Championships such as reception, secretariat, management offices and press room.

Italy was one of the hardest-hit areas during the height of the coronavirus pandemic this spring and Macelloni said hosting the World Championships would be an opportunity to bring international tourism back to the area.

"The Coronavirus has created more movement of cyclists in our area, and this is also a reason to choose cycling as a means of communication," he said. "Switzerland's renunciation of organizing the World Championships is a great opportunity for us to enhance the area. In 2021, we will be present at major international trade fairs with artistic and commercial productions of our area. The World Championships would help us to make people on all Continents understand who we are."