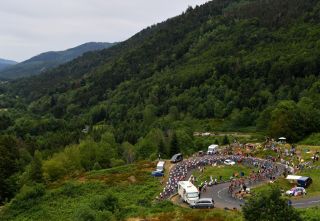 The French Cycling Federation (FFC) announced on Saturday that, in partnership with the Department of Haute-Saône, they have put forth a bid to host the 2020 UCI Road World Championships, which could see the road races routed over the climb of La Planche des Belles Filles, located in the Vosges mountains in the Haute-Saône region of France.

The UCI confirmed earlier this month that the Road World Championships in Aigle-Martigny, Switzerland, had been cancelled due to government-enforced COVID-19 restrictions on public gatherings, but that they hoped to find a new location in Europe for at least some of the races.

The event was scheduled to be held from September 20-27.

"The FFC and the Department of Haute-Saône present a recovery project for the organization of the 2020 World Road Cycling Championships," the French Federation published across its social media channels.

The UCI said that it would honour the mountainous design of the route that was planned to take place in Switzerland during its search for a new location.

The world-class men's peloton is scheduled to compete in the Haute-Saône region during the 2020 Tour de France where they will contest a time trial on stage 20 from Lure to La Planche des Belles Filles on September 19. The area, known for its ski resort, has hosted the Tour de France on five occasions within the last decade.

According to a report in L'Est Republican the same infrastructure used to host the Tour de France could be used to accommodate the World Championships. The publication also reported that Luxeuil is being considered as a start location and that the circuit would include a climb over the Col des Chevrères.

The Haute-Saône isn't the only bid for the World Championships as the Tuscan region of Valdera announced last week that it, too, had bid to host the eight-day event.

The organisers of the Giro della Toscana and the Coppa Sabatini, Unione Ciclistica Pecciolese, confirmed that they are willing to meet with the UCI to negotiate the terms of hosting the eight-day event and discuss the routes details.

The UCI confirmed that it will decide on the new location for the 2020 Road World Championships by September 1. The sports governing body confirmed that the event would take place from September 20-27 on a similar course to the original route designed for Switzerland.