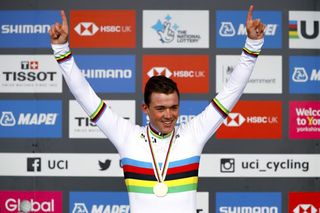 The UCI have confirmed that the Italian city of Imola in the central Emilia-Romagna region will host the 2020 Road World Championships, the weekend after the end of the Tour de France.

It is the 12th time Italy hosts the World Road Championships, seven years after Florence. The world championships were held in Imola on September 2, 1968, when local rider Vittorio Adorni attacked early with Rik Van Looy and then rode solo for the final 90km, winning by over nine minutes.

Imola, some 40km south of Bologna, was preferred ahead of a strong French bid from the Haute-Saône department that included a finish on the La Planche des Belles Filles climb that will host the final time trial of the Tour de France. The World Championships were due to be held near the UCI headquarters in Aigle-Martigny in Switzerland but the local organisers backed out in mid-August when the Swiss COVID-19 restrictions made the event infeasible.

Italy has far lower cases of COVID-19 than France at the moment and so is able to respect the UCI medical protocol and is unlikely to be affected by the risk of a second wave of cases and local lockdown measures.

All the racing will finish on the Enzo e Dino Ferrari motor racing circuit on the edge of Imola, with the infrastructure of the motor racing infrastructure reducing the time and costs needed to put on a major race. The finish line buildings can safely host the race headquarters, the pitlane boxes and paddock area are perfect for social distancing between national teams and limited crowds could even be allowed to watch the racing from the grandstands.

Importantly for the UCI, Imola and the Emilia-Romagna region will also pay a significant fee, estimated to be between three and four million Euro, to host the World Championships. This will be vital income for the UCI’s finances after 70 per cent of other racing was cancelled and the Tokyo Olympics were postponed until 2021.

UCI President David Lappartient had called for a testing course for the new location to replicate the climbing that was expected in Switzerland. Adorni won on a circuit that included the Tre Monti circuit but further climbing is expected to be added by riding deeper into the Apennines near Riolo Terme.

The UCI confirmed that the men’s 259.2km race will include over 5000m of climbing and include nine laps of a 28.8km circuit. The women's race will be cover 144km with a 2750m of climbing during the five laps. The time trials will be on flat course, with all races finishing on the motor racing circuit.

“The award of the UCI Road World Championships in Italy this year is of great symbolic value for the UCI: in a country that suffered enormously from the Covid-19 pandemic but was able to confront it effectively and with courage, the staging of our leading annual event will, in its own way, be a sign of a return to normal in a region where the health situation is now under control," Lappartient said.

“I am convinced that the 2020 UCI Road World Championships in Imola will allow us all, despite the difficult current situation, to witness a great sporting festival. I invite you all to follow this event in Italy, true cycling territory, on one of the most challenging circuits in the history of the UCI Road World Championships. I look forward to watching these races which promise to be magnificent.”

Cyclingnews will have full coverage of all the racing at the Imola World Championships.