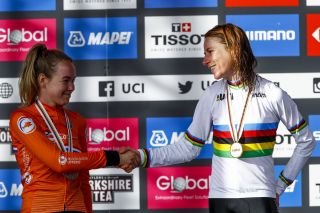 Anna van der Breggen got an armchair ride to the silver medal in the elite women's road race at the UCI Road World Championships in Yorkshire on Saturday.

As her teammate Annemiek van Vleuten put forth an astounding 100km solo ride to secure victory, Van der Breggen closely marked any chasing group before soloing in for second place, giving the Dutch team a 1-2 finish on the podium.

"It was a good situation for us, even though it was a bit far to go for Annemiek," Van der Breggen said. "There weren't too many tactics involved. She just needed to ride as long and as fast as possible, and I just had to sit back and watch.

"Gold and silver is a great result. I'm happy with it."

Van Vleuten attacked 45km into the elite women's 150km race held between Bradford and Harrogate on the second of two climbs, Lofthouse, and descended alone to build her lead out to 50 seconds.

"We expected a bit more of a group, not a solo attack," Van der Breggen said. "After the descent, we looked around to determine the situation and it was perfect."

Van der Breggen explained that the success of Van Vleuten's solo move depended on how quickly the chase group got organised. She sat on the back of the group, not needing to take pulls because her teammate was up the road. What she saw was a chase group that wasn't committed to reducing the gap to Van Vleuten.

"The race had just started at that point, and it all depended on how well our [chase] group worked together and how fast they were riding," van der Breggen said. "The gap stayed at 50 seconds for a long time, and at that point, anything was possible.

"They were chasing hard, but I expected a bit more cooperation in the beginning. If you get [organized] fast then it takes less time to bring it back. But the longer it took, the more girls were skipping turns and getting tired. Girls were also trying to save [energy] because it was such a hard race, but that's also why the chase was not fast enough. In the end, it was clear that it was going to be difficult [to close the gap]."

Van Vleuten secured the world title after a 104km solo effort. She crossed the finish line 2:15 ahead of Van der Breggen, who attacked Spratt in the final kilometres of the race to bring home the silver. Spratt finished with the bronze medal.

The Dutch team came into the Yorkshire World Championships with the strongest team. They had eight riders including Van Vleuten and Van der Breggen, who won the world title in Innsbruck, along with three-time winner Marianne Vos, Lucinda Brand, former winner Chantal Blaak, Amy Pieters, Floortje Mackaij and Demi Vollering.

"There is a lot of talent," Van der Breggen said of the elite women's Dutch squad. "If you're [able to race] in the first group, it's not only talent but a combination of dedication, a lot of work, and talent.

"It's nice to ride in the orange jersey and to try to win the world title. That spirit is good in our Dutch squad."

Some questioned how cohesive the team would be given that any one of them could potentially win the world title under the right scenario. Cyclingnews spoke with the team's director Loes Gunnewijk, who said the riders worked as a unit and carried out the team plan to perfection. The riders showed their professionalism and willingness to sacrifice personal ambitions for the common goal of the team.

"The team goal was easy: ride for the gold no matter what and nothing in between," Gunnewijk said.

"It's a lot of pressure on the whole team at the Worlds. Everyone thinks the Dutch will win, but it's still racing, you have to be in good shape. To be world champion all the pieces have to come together, so it's not as easy as everyone was saying. It was a long race today, and the team was very good."

Van der Breggen said that every rider contributed to the team tactics meeting held earlier in the week and allowed to share opinions based on individual knowledge, experience and strengths.

"The director has a say in the plan, of course, but everyone was given a chance to say what she was thinking," Van der Breggen said.

Gunnewijk said she couldn't be happier with the way the Dutch women executed their team plan and they plan on celebrating their success together in Harrogate. "We won gold and silver so now it's time to party."