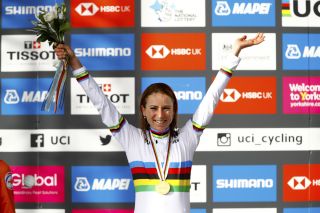 Annemiek van Vleuten's triumphant ride has been compared to Eddy Merckx's exploits as well as those of Alberto Contador and more recently, Chris Froome's jaw-dropping performance on the Finestre at the 2018 Giro d'Italia, but her victory in the women's elite road race at the UCI Road World Championships in Yorkshire deserved its very own place in the history books.

The Dutch rider came into the race with her confidence knocked after a bruising defeat in the individual time trial but she categorically put that performance behind her with a solo 104km breakaway to claim the first road race world title of her career with a display that at points verged on the side of a procession.

"I didn't believe that it could be possible to stay away for 104km," the 36-year-old said at the line.

"I felt super good, and I still had the power and that gave me confidence that it could be possible and saw the power on my power meter and I knew that it would be hard for the people behind."

Those left behind were the survivors of a world-class field that included time trial winner Chloe Dygert Owen, Lizzie Deignan, and last year's winner Anna van der Breggen, who carefully marked moves in the chase group.

Van Vleuten's attack on the Lofthouse climb saw her establish a two minute lead on the Dygert Owen group but it also consigned the vast majority of the field to nothing more than a Saturday spin through the Yorkshire countryside. One rider who finished in the main field described her day in the saddle as 'boring' while Marianne Vos, Coryn Rivera, and Marta Bastianelli were reduced to also-rans before the race even reached the finishing circuit in Harrogate.

Van Vleuten still had a huge task on her hands and even though the chase lacked cohesion she still had two-thirds of the race to cover from the moment she accelerated clear of the bunch. Later she admitted that her attack on Lofthouse was planned but that she expected to draw a group with her. However, with Van der Breggen enjoying a free ride in the chase group Van Vleuten's was encouraged to continue.

"That was the plan and to then maybe create a small group with Anna. It would have been stupid for the Dutch not use that point to make the race hard. The plan was to see the situation after the descent," she said.

"But I felt super good today and thought that maybe it would be stupid to ruin my legs with a solo. Then the national coach told me to continue with Anna behind that I should go for it because they weren't chasing hard from behind. Then I was inspired to go for it. I gave it a go but I played it smart. I didn't give it everything on that first part and just tried to take time on the climbs."

Although the chase group lacked cohesion a reaction was always likely to come and as expected it was the time trial world champion who made the difference. Dygert may not have raced on the road in Europe until today, and she would ultimately pay for that inexperience, but she threw down several attacks when the race reached Harrogate. The American tore away from the chase group and immediately cut 30 seconds off Van Vleuten's lead. For a time it looked as though a competitive race might ensue.

"When Dygert tried to come across the gap was 1:45 and then I got a bit nervous but when I saw that it was 2:10 I thought that maybe this really crazy day could be finished off."

When Dygert was caught and then duly dropped with around 10.4km to go the writing was effectively on the wall. Van Vleuten would have time to celebrate her extraordinary ride before she even crossed the line with a winning margin of 2:15 ahead of Van der Breggen and the determined Amanda Spratt of Australia.

"This is the most special win," a delighted Van Vleuten told the media.

"After last year in Innsbruck I couldn't celebrate my time trial win after breaking my knee there and I felt that was my chance to be the world champion on the road. I thought that was my only opportunity. That makes this title. I can really enjoy it now."

Getting over the time trial

As darkness fell on a rainy Harrogate on Tuesday, Van Vleuten admitted that her trial performance had caused concern after she noticed a drop in power that resulted in her taking third in what was just her second time trial defeat in almost two years.

As she talked with the media in the mixed zone she admitted that her opening performance at this year's Worlds was nothing but an off-day.

"We parked that day. I and my coach said that next week we'd go out for dinner and talk about this [the TT].

"I gave myself one day to be a bit sad and had one night of bad sleep. I didn't want to analyse it. We had a three and a half hour the road course and I thought 'shit I have to take out my world championships kit out of my closet'. That made me really sad but I thought, 'no there's maybe one more chance for the clothes to still be there.' And they're still there. I'm not at the point where I have to take them out."

The comparisons with Froome and his Giro defining ride from 2018 were brought up again in her post-race press conference, as well as a question owing to the Netherlands' domination in women's cycling as a whole. The women in orange have now claimed the last three road world titles, the last two of which have been decided by solo breakaways and huge winning margins.

"The Dutch are super strong. I can only speak for myself and I know what I've done to win this title. It's not possible for everyone but I know that I was able to put out an excellent performance because I do a lot of hours on the bike. I also do epic training camps with the men and my teammates say that I'm crazy to do this but this is what helps me win solo.

"I know how many hours I spend on the bike to get super well prepared here. I'm a bit crazy, also in my preparation. I'm someone who works hard on and off the bike but I also really enjoy. To be able to do 100km solo is maybe the present of all the hard work I put in on the bike. I do the altitude camps by myself and today it paid off. It was crazy and maybe I wrote a bit of history today."

History has indeed been written, and Van Vleuten has now joined an elite club of four women who have reigned as time trial and road world champions during their careers.

Importantly, Van Vleuten's exploits need no comparison to her male equivalents in order to be validated or commended. Her ride in Yorkshire stood out for reasons all of their own but when asked about those comparisons she was as gracious as she was clinical on the road.