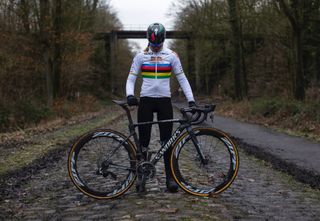 The former world champion told Cyclingnews that the iconic cobbled Classic is like none other on the calendar and that its first winner will need to be strong, well-positioned, confident and unafraid.

"I think it will be someone who is not scared, first of all," Van der Breggen said. "Also, someone who does very well in positioning. If you go to the cobbles you should be in front because it’s possible that there will be some crashes.

"You see it with the men’s race, and if you are behind, it will take a long time before you get back. It’s a long race and a hard race so somebody who is strong and good in positioning could win."

The UCI announced on May 5 a revised 2020 Women’s WorldTour calendar, a replacement for plans that were halted due to the coronavirus (COVID-19) pandemic. Although the Postnord UCI WWT Vårgårda WestSweden road race and team time trial have recently been cancelled, the top-tier series has retained 18 of the 22 events, with five stage races and 13 one-day races.

The races will begin on August 1 and run through November 8, with the surprise addition of a first-ever women's Paris-Roubaix, run by Tour de France organisers ASO, scheduled to take place on October 25.

"It looks like a really nice calendar," Van der Breggen said. "They put the whole season into three months. If it happens, it will be really busy. But Sweden has already called off the whole event. I’m a little afraid that will happen more, but I’m hoping it won’t and that things go right. Not only for cycling - if we can start racing again that means other companies can start up again, and that means it’s going well. Hopefully, it goes better and we will be able to do some racing. Like everyone, I have no idea if it’s possible.

"They made the women’s Paris-Roubaix a really nice surprise. Nobody knew and then suddenly it was on the calendar. That was really cool to see that in times that are difficult, and in which it's difficult to plan, they showed that they really want to give us that race. That’s really positive. It’s not only really nice that it’s on the calendar, but it is also a race that we don’t have yet. It’s a different race than Tour of Flanders or Omloop Het Nieuwsblad.

"These cobbles, we tried them, they are brutal and different to any other cobbles. I don’t know how they find these. This race already has a lot of history in men’s cycling and now we are able to race, it is a big step for women."

Boels Dolmans have experienced riding on the cobbles of Paris-Roubaix after spending a full day last year filming a promotional video for sponsor Specialized when it launched the newly updated Roubaix bike.

In a video posted across social media at the release, Boels Dolmans riders Chantal Blaak, Christian Majures and Van der Breggen are seen riding over the rough cobbles of the Forest of Arenberg, the most famous section in the men’s race. The team used the video as a campaign to see if ASO and the UCI would add a women’s Paris-Roubaix to the calendar.

"That was the first section of cobbles. It was a media day but we had ridden those cobbles the whole day," Van der Breggen said. "I will be honest, we were surprised. That’s why I’m saying that it is a totally different race on the calendar. It’s not like any other cobbled race. We had some rain and it was a grey day. I was surprised that the cobbles were laid out so badly. It was quite difficult to ride over them.

"It’s not only riding the cobbles. It’s that you ride in a bunch and everyone wants to be in the front, so the speeds go up before the cobbled section, so when you hit them sometimes its at 60kph or more. If it’s wet, like it was that day, it’s quite something. I think that everyone should prepare for those cobbles in a way that is different than other cobbled races. It is different. It’s not only road cycling, it’s something different."

Van der Breggen warned that all teams and riders should spend time previewing the route once ASO release course maps and details of the women’s Paris-Roubaix.

"I hope at least everyone is doing a recon," she said. "You should know what to expect and how it feels. Those cobbles, when you go on them, also one thing is that you cannot see clearly anymore, you go up and down, and it’s difficult to see where you're going. If you’re riding alone, that’s fine, but if you're riding in a bunch that makes it even more scary. It’s good to experience those things before you do it in a real race."

Van der Breggen said she isn’t picky about what races she starts, as long as she has an opportunity to race this season. She also told Cyclingnews that she would like to race at the World Championships in Switzerland in September.

"At this point, I don’t really mind what races I do," she said. "This calendar goes from one important race to the other, so I think that my priority is that if we can do some racing, I’m already really happy. I just hope to race this season."

Van der Breggen announced that she will retire from professional racing at the end of the 2021 season and move into a director's role at the team under new sponsor SD Worx.

Asked if she would like to race the women's Paris-Roubaix before retiring from the sport, she said that being the first woman to win such an historical race would be special. However, she believes Boels Dolmans will choose the best roster for the parcours, and whether she is selected for that team remains to be seen.

"Mostly, if I looked to the race now, I’m mostly happy that it’s on the calendar and that it will be there in the future. I just want to have the team there, if that’s including me or not, it doesn’t really matter. If girls are really motivated then the right team is important," she said.

"There is a lot of history behind this race. It's a first for women - it’s like a kid going into a candy shop - so if you're the first one to win it, that's really special."