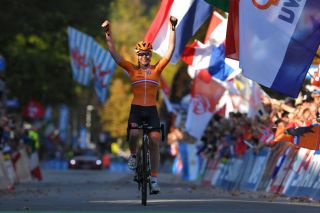 Anna van der Breggen (Boels Dolmans) has been one of the most successful and versatile cyclists to have come from the Netherlands. During her eight-year career, she has won just about everything there is to win in women's professional road racing from stage races to one-day races and from flat to mountainous parcours, and she even tackles to occasional off-road event.

She joined the pro ranks with the Belgium team Senger in 2012 and then moved up to Rabobank-Liv in 2014 where she spent three seasons. She has raced for the number one ranked team in the world - Boels-Dolmans - for the past four seasons.

With a career that spans eight years and includes almost too many victories to count, Van der Breggen walks us through the five races that have changed her life.

I want to start with a race from a long time ago. I was seven years old. I was not a cyclist yet but I wanted to be a cyclist. Every year in my hometown there was a kids race, before the race happened you could also compete with normal bike. This was my first cycling race. It's called a Dikken Banden Race, which means that it is a fat tire race and it was held in Hasselt where I grew up.

For kids, the races in the Netherlands are mostly a maximum of two kilometres, and this race was about 1.5 kilometres, just one lap. These races are to mostly help local kids get inspired to continue on to racing.

I still remember this race, of course, because everyone else was not focussing and they were just riding laps, and I really treated it like a real race and I wanted to win. There were two boys who were in a higher grade than me, they were older, in school and they were also competing. I was quite little at that time and they were much bigger. I won that race and so I was really proud. We stood on the podium together and I remember that they were taller than me even when standing on the second and third places.

This race was in my first year as a professional with the Belgium team Sengers in 2012. The race was 127km, shorter than the race is now, but we did many of the same climbs. Judith Arndt won [from a breakaway, ed.] and I remember that I finished ninth [in the chase-group sprint, ed.] and I didn't expect that at all. I had never had a top-10 finish in a race as big as Flanders. It was very special because when you are young and training hard and you have your first success, for me, it felt like I won the race. Sengers was a Belgian team and Flanders was really important to them, but we were a small team and just beginning that year, so to get a top-10 place in a race like that was nice for both myself and the team.

I would have to say the 2016 Olympic Games in Rio because it is such a big event and something you see on television as a kid. If you can just go to the Olympic Games, that's already special. It was my first time and it felt so big, it was big, like we did a whole preparation because it was an important race. To then win that race, of course I was hoping to win, but I never believed that I could win it. Winning made it a really special race.

The finish was so, so close, and it wasn't only that Mara Abbott was off the front alone, but I also needed to make a decision about how to work in the chase group. I asked myself "do I go full to bring Mara back before the finish or do I save something for the finish?". That was an important question because if we brought her back, I wasn't alone but with two other riders [Elisa Longo Borghini and Emma Johansson]. So, I knew that I also needed to sprint. I kind of felt that Emma was not riding full, and so I was working, we were all working, not full, but we were also not sure we would be able to bring Mara back.

The nice thing is that when I watch a replay of that final now, every time, it's still exciting. I have a lot of videos from friends and family who filmed those final moments of that race. It's suspenseful and nice to watch the replays.

I also got the bronze medal in time trial as well, so it was a successful Olympic Games. I have those medals but I still need to find a better place for them in my home, because they deserve better. I don't have a nice place yet but, for sure, they will get one.

The World Championships in Innsbruck was the main goal for me after the Olympics. Every cyclists wants the rainbow jersey because it is something that you cannot wear that often. I was dreaming to win it and I had been so close a few times. In Innsbruck, the whole race was what I had in my mind. I had prepared for it the whole season and I felt good on the day. I needed to be good and I won it in a nice way. I really enjoyed wearing that jersey after that race.

It was a strange parcours that went up and down, basically, and you don't have much from other riders. They could help on the uphill but on the downhill you could go alone as fast as the bunch, maybe faster. Then there was the town, which was nice to have a group, but then the climb came around quickly again. The parcours was perfect for a ride like I had, and to do it I knew I had to feel good because the parcours was hard. There was no hiding.

It was really nice, too, because my family and friends were all able to come and watch. It was a big group. Normally, my races are too far away or they have to fly, but this time they could travel by car. They tried to scream every lap, so that I could hear them, and of course we went out after the race to celebrate and they couldn't talk because they had lost their voices from screaming so hard during the race. It was my biggest fan group ever. If you can win a race like that it's even nicer if your friends and family can be there, see it, and feel the environment of a World Championships. They were all impressed and it was nice to share that experience with them.

My first time winning the Giro Rosa. I was thinking about choosing Flèche Wallonne last year because it was a big thing to win it five times, but the Giro Rosa had a special feeling because it's 10 days and you do it with the whole team. I had raced it with Rabobank when Marianne Vos won and that was so nice. I had the feeling that I learned how to race it and then I later focussed on winning it myself. To win a stage race like that for the first time felt good especially because you have that feeling with the whole team because you ride for 10 days together.

I can't imagine how it is to do a Grand Tour like the men, for 21 days or three weeks together, riding as a team, sleeping in the same hotel, eating together. It really gives you a group feeling. To win a race like that is different than winning a one-day race.

In Italy, too, everyone knows what the maglia rosa means and they know a lot about cycling. I really like Italy, not just for racing but also for training. I also like their respect for other people, they have a laid back culture, take time for proper food and good coffee. I always have a good feeling when I'm in Italy, and maybe that's also because almost everybody likes cycling. There's a lot of respect for women's cycling, too, so to win a stage race in Italy is special.

The Giro Rosa always does something different with big climbs and it's been around for a very long time. They have added more and more climbing but kept great sprinters' stages. Racing the Giro Rosa in Italy is always a big deal.