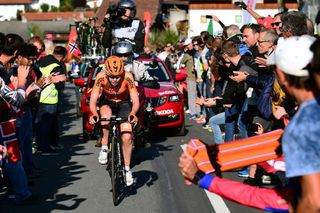 Anna van der Breggen made a surprise announcement to retire at the height of her career and become a sports director for SD Worx women’s cycling team at the end of 2021. She will attempt to defend her gold-medal-title at the Tokyo Olympic Games next August in what will be her last major target of a dazzling decade-long run as a professional cyclist.

In an interview with Cyclingnews, Van der Breggen promised that she was not quitting women’s cycling altogether but rather moving into a position that would allow her to continue to develop the sport. She intends to use her knowledge as a world-class competitor, experience in sports science and nutrition, and coaching to further women's racing and the riders on her team.

"I’m retiring, but I don’t have the feeling that I’m quitting what I’m doing in the sport," Van der Breggen told Cyclingnews in a phone interview Thursday. "It’s a nice feeling to know that I will still work in women’s cycling and still be able to develop women’s cycling because that’s something I like to do."

Van der Breggen is one of the most successful cyclists of all time having built a successful career on her versatility as a rider - one who can win on just about any terrain. Her accolades include a gold medal in the road race and bronze medal in the time trail at the 2016 Olympic Games, road race world champion (2018),  twice overall winner of the Giro Rosa (2015 and 2017), five-time consecutive winner of Flèche Wallonne (2015-2019), twice winner of Liège-Bastogne-Liège (2017-18), and winner of Amstel Gold Race (2017) and the Tour of Flanders (2018).

Van der Breggen said that her decision to retire was, in part, because she had realised that she was looking for a new challenge in her life. The idea of trying new things to stay motivated in one's career is not new for Van der Breggen. Two years ago, she told Cyclingnews that she wanted to make a change to her standard road racing season by including World-Cup mountain biking into her programme. Her efforts to keep her cycling career feeling fresh and new by introducing off-road competition were met with success when she went on to dominate Cape Epic with teammate Annika Langvad.

By the time she retires her professional career will have spanned nearly 10 years having turned professional in 2012 with the Belgian team Sengers. She only just turned 30, an age where many professional cyclist are just beginning to find their legs. However, Van der Breggen explained to Cyclingnews that began racing as a young child through the Dikken Banden Races in her hometown Hasselt, in what must feel like almost a lifetime ago.

"I haven’t thought about age," she said. "I’ve been cycling since I was seven years old. I already made the decision that, for me, it would feel good to make my last year as a rider next year [2021]. Of course, I asked myself the questions: What’s next? What would I like to do? What talents do I have? How does the future look for me?

"I had some things in mind that I found really interesting and that I like to do such as sports nutrition, which is a big part of cycling. I also thought about coaching the girls on the team and how to do it. I thought about the team in the way that it’s running now and what needs to be done to change it for the future.

"When the team asked if I would like to be a sports director, I initially though no because I had different plans in mind. I wanted to do so many things and I didn’t have this in mind. The more I thought about it, though, the more I realised that there’s a lot in being a sports director that I already have experience with and that I find interesting.

"I also think that I can develop myself while also trying to make this team a better team. It’s nice to stay with this team because we're just in the beginning of this process, and there is a lot to think about and to improve. It’s nice that I know the team already and that I can help work on areas to improve from the beginning. That would be different if you went to a different team.

"If you went to a different job, not in cycling, that would mean that everything I know in cycling would be gone, and not used, to teach other riders to improve, or to share the things you know. I’m still young, yes, but it’s nice for me to still be part of the team and to stay in cycling in a different way."

Boels Dolmans have been the number one ranked team in the world for the past five seasons, and Van der Breggen has been a big part of that success. It is also one of the few world-class women’s teams not attached to a men’s WorldTour programme and team manager Danny Stam has a stated goal of remaining independent.

Boels Rental and Dolmans will part ways with the team at the end of this year making way for the team’s new title sponsor SD Worx to take over a four-year term through 2024. The team brought in American Jack Seehafer as a sports director this year, Van der Breggen will begin as a director at the end of 2021, and Chantal Van den Broeck-Blaak will retire and join the team in a similar role in 2022.

"I will be doing everything that fits with being a sports director," said Van der Breggen, who is hoping to take the designated sports director's course through the UCI in the fall-winter of 2021. "Danny is doing a lot and we have Jack, who is also doing the races, but Danny is doing most the planning and has always been directing the team. The second sport director changes sometimes, which is good but the team is ready now for the next steps. The UCI rules are changing and with the new sponsor SD Worx we need more sports directors."

Boels Dolmans is currently not one of the eight top-tier WorldTeams, however, Stam indicated that they will apply for that status beginning in 2021.

Before preparing to become a sports director, Van der Breggen has one more major goal lined up for the 2021 season at the Tokyo Olympic Games. All cycling races, including the Olympic Games, were halted this year due to the COVID-19 coronavirus. Van der Breggen said she plans on duplicating what would have been this year’s training and racing programme to include a Spring Classics campaign in 2021.

"I signed for the whole year," Van der Breggen said. "The big goal is the Olympics. It’s the biggest point that we work toward. I won’t quit straight after but if that is the really important goal then I don’t know how the motivation will be for different races afterward, so I haven’t made a plan yet for the period after the Olympics.

"There won’t be much change in my plans [to retire] if I win [Olympic Games]. You’re not able to ride in a special jersey, so that’s not a big thing. The planning will be a bit the same as what I did this year. We made a plan for the 2020 Olympics, and so I think it will be the same, just one year later. I’ll race the important spring races and then you have to see how you’re feeling, what you still need, what kind of training camps, and so it will be similar."

Van der Breggen said that although the coronavirus has had an impact on many businesses that provide sponsorship funding within cycling, it has not affected SD Worx's commitment to support the women’s cycling team for the next four years.

"They are really into cycling and continue to work on their future plans together with our team and that feels special to know that it’s possible in this period. It also gives us a lot of confidence for the next four years," she said.

Van der Breggen is under no illusion that the sport and riders are facing significant financial pressures due to the coronavirus this year. And even at the best of times, athletes can struggle to adapt to a new post-racing career. Van der Breggen said she feels lucky to have secured a job a year before retiring in a field she knows well.

"I’ve been doing this for years and especially in this period when we are at home and not racing, everyone thinks about it a lot - what happens when you go into retirement and you are home all the time? It’s a big difference and a big change," Van der Breggen said.

"That can be difficult if you don’t have perspective on where to go or what to do next. It’s too much just to do nothing. As an athlete you’re always working on things and when you stop your sport that can be quite difficult."