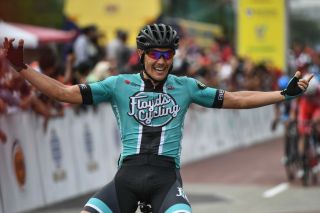 "I have always dreamt of racing overseas and at the WorldTour level ever since I started riding a bike and watching the Danish movie 'A Sunday in Hell'," McCabe said in a statement provided by the team.

McCabe has nine wins in UCI races ranked 2.1 and higher, including taking stage 3 at the Tour of Langkawi earlier this year to add to his previous two stage wins there in 2017. McCabe has four stage wins at the Tour of Utah, tying EF Education First's Lachlan Morton for the total number of wins there, as well as a stage win each at the Herald Sun Tour and the Colorado Classic.

Despite a spattering of international results, McCabe's biggest success has come in the bigger US races and the smaller races on the US domestic calendar. A move to racing full time on the international calendar will provide a chance to prove himself in cycling's top tier.

"I feel like one of my goals has always been about progression, and this is another part of it," he said. "I want to prove to myself and others that I have always belonged in Europe racing at the top level, and so I am really looking forward to what the future within the Academy holds.

"I know I'm physically capable of riding at WorldTour level, and for ICA I'm not afraid to bump bars or fight for the front. It is just like criterium racing in the States except 200 kilometres longer, right!?"

McCabe is well familiar with Israel Cycling Academy after racing against the team previously in Utah and Colorado.

"ICA has always raced in the States, and I feel like I have always competed against the guys in international races as well, so it is pretty cool to finally come aboard, especially now that Israel Cycling Academy has made the step up to WorldTour," he said.

Israel Cycling Academy team manager Kjell Carlström said McCabe will get his own chances, but he'll also be a valuable part of ICA's lead-out train after the team signed German powerhouse sprinter Andre Greipel in the off-season.

"Travis has gotten some wins every year, and although he has not raced so much in Europe, he does have a lot of experience," Carlström said. "Travis will therefore also play an important part of the lead-out."

McCabe summed up his goals for 2020 in three main points.

"So my goals for 2020 are to first and foremost be a valuable teammate and ambassador for Israel Cycling Academy, but I also want to prove myself over in Europe," he said.

"I must say that I am very, very excited to join and be part of Israel Cycling Academy. I believe that ICA is helping pave the way for future cyclists who might not have known about the sport otherwise. I think we truly have an international team, and I’m extremely proud to represent the United States."

McCabe is one of 16 new riders Israel Cycling Academy added as the team jumps to the WorldTour. Previous signings include Andre Greipel, Dan Martin and Nils Politt.