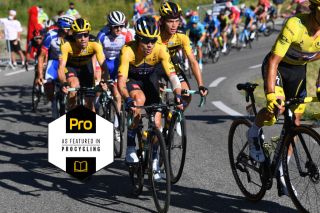 Five years is a long time in sport. In 2015, LottoNL-Jumbo won just six races in a barren year for the inheritors of Rabobank’s WorldTour licence, bouncing around at the bottom of the form table. Those heady Rabobank days seemed far behind them, but a plan was already in motion to build a world-beating squad that could challenge at the Tour de France.

Year on year, the team that went on to become Jumbo-Visma have steadily improved, from Steven Kruijswijk’s fourth-place finish at the 2016 Giro d’Italia through to Primož Roglič finally winning a Grand Tour at the Vuelta a España in 2019.

Roglič’s win in Spain was one of 51 victories last year, and that run of form has continued into 2020, with the team now managing 15 wins and a number of impressive displays so far, despite the hiatus in racing.

A key cog in that development is clearly Roglič who since 2016 - the year he joined Jumbo - has been on a meteoric rise to the top, up to his win in Orcieres-Merlette on stage 4 of the Tour de France which confirmed his status as the favourite for this year’s yellow jersey.

The Slovenian champion has raced six Grand Tours, and won a stage in every single one of them. This, his third stage win in the Tour, is the most notable, though, for the way it was so predictable, so easy, so inevitable.

Among the men in yellow (but note, not the man in the yellow jersey, yet) are the riders of the season restart; Wout van Aert, former Giro winner Tom Dumoulin, and the young American climber Sepp Kuss. All three were visible at the front of the bunch on the first summit finish of the Tour, and all three are part of the plan to bring Jumbo-Visma to the top of the world.

Just as Sky and then Ineos did in the past, the Dutch team can rely on the strongest team in the race to power their leader around France. It helps that they have the strongest rider in Roglič too. In past Tours it was Richie Porte, Michał Kwiatkowski, or Wout Poels pulling on the front for Chris Froome, as they used their own talent to deliver their leader to the crunch points fresh. This year, Van Aert and Kuss appear to be filling the same job for Jumbo-Visma. At one point on the climb, at a gradient of seven per cent, Kuss was pulling the group of favourites along at 31km/h, a pace that dissuaded any attacks.

By the time Roglič finally attacked, no one could match him, and Kuss behind him punched the air with delight when his leader crossed the line, as he completed his job. It was a repeat of the performances the squad put in earlier this summer at the Tour de l’Ain and the Critérium du Dauphiné, where Roglič won three stages. The team looked so in control at those races that it seemed that they already had their noses in front of Ineos Grenadiers, and their form certainly hasn’t gone away.

Van Aert could have challenged for the win on all of the first three days of the Tour, but the winner of Strade Bianche and Milan-San Remo clearly buys into the team’s approach, putting all his energy on the road to pilot Roglič into the perfect place on the final climb today. The performance from Kuss and Van Aert meant that there wasn’t even any need to use Dumoulin, with the tall Dutchman lurking at the back of the pack of favourites, the perfect foil to use later in the race. It will certainly be tricky for him to assume leadership of the team with Roglič in such form.

The team appears to be functioning so well at the moment that there isn’t any great worry about the lack of Kruijswijk at this Tour, either, after he crashed at the Dauphiné. Jumbo have taken the role that for so long we saw Sky and then Ineos fill. Even the sight of road captain Tony Martin sitting up with his arms outstretched to slow down the peloton on the rain-marred opening stage in Nice, as the peloton’s patron and figurehead of reason, reaffirmed their position of strength. With Robert Gesink, George Bennett, and Amund Grøndahl Jansen still yet to be severely used in this year’s race, it is tricky to see any other squad outmuscling them.

Five years down the line from the depths of the 2015 season, team director Richard Plugge must be delighted at how his project for a Dutch powerhouse in cycling has already come to fruition. Plugge must be thinking about Ineos Grenadiers’ principal Dave Brailsford in the same way David Cameron spoke of Tony Blair: you were the future once.