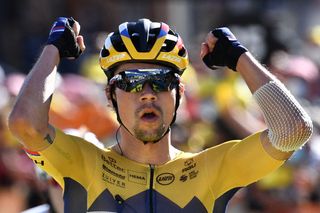 The time deficits were relatively small in the grand scheme of things but stage 4 still saw several climbers and potential GC contenders at the Tour de France lose time on the first summit finish of the race.

The most high-profile rider to ship time was Emanuel Buchmann (Bora-hansgrohe) with the German, who finished fourth in last year’s Tour de France, losing nine seconds, plus bonuses to stage winner and rival Primož Roglič (Jumbo-Visma).

Buchmann came into the Tour on the back of a crash at the Critérium du Dauphiné that threatened his participation in this year’s Tour and on the shallow slopes of the Orcières-Merlette he should have been able to match the pace set by his rivals. He trailed home in 17th place, just ahead of Movistar’s hope for the race Enric Mas.

"I felt OK until 1.5km to go, then they started to go really fast and I was a bit too much behind," Buchmann said at the finish.

"And then, I couldn't follow, it was a bit too much. I don't have any pain anymore, it's getting better and better. I'm not at 100 percent now but I hope the next days it will get better. There's still along way to Paris and a lot more mountain stages."

Richard Carapaz, who was touted as a possible GC contender alongside defending champion Egan Bernal, faired worse, losing 28 seconds on the lead group of 16. While Rigoberto Urán managed to hold the pace for EF Pro Cycling, the same couldn’t be said for Sergio Higuita, who finished in the same group as Carapaz, and his EF Pro Cycling teammate, Dani Martínez.

Bernal remains in sixth place on GC, 17 seconds off the race lead, although he momentarily showed signs of weakness when he failed to follow Roglic's acceleration. The Colombian has his eye on the final week.

"It was really fast and a really short climb, punchy in the final. It was a good climb to see how the GC riders are. I’m happy to arrive with them because it was really hard," he said.

"It’s not good when another GC rider gets some seconds but I think we need to be patient and know that our best scenario is to arrive in the third week without losing too much time and then trying to recover time on the long climbs. We want to arrive as fresh as we can in the final week."