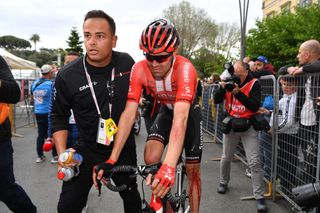 Tom Dumoulin (Sunweb) quit the 2019 Giro d'Italia on stage 5 having crashed and injured his knee the day before (Image credit: Getty Images)

Tom Dumoulin has said that he hopes to be back training as normal in November as he recovers from the knee surgery he had after crashing at this year's Giro d'Italia.

According to Dutch website Wielerflits.nl, Dumoulin told former Sunweb teammate Laurens ten Dam – who is now at CCC Team – in Ten Dam's podcast, Live Slow Ride Fast, that he was currently only riding for two-three hours per day, but that he soon hoped to return to being able to train normally.

"Two weeks ago, the tendon in my knee would become inflamed if I did too much," Dumoulin explained, "so I still have to be very careful, and it's meant that I haven't been able to train for more than two or three hours a day.

"But I'd prefer to try to increase the intensity of the training, rather than the duration. I can climb quite fast again, but putting pressure on the knee when turning a corner is still painful," he said. "The hope is that from November I'll be able to use it to its full capacity again."

After crashing on stage 4 of this year's Giro d'Italia, Dumoulin quit the race on stage 5, but felt sufficiently recovered to ride the Critérium du Dauphiné in June. However, he was forced out after six stages of the French race due to continuing pain in his knee, and hasn't raced since. He opted to have surgery in late June, and was therefore forced to sit out this year's Tour de France, which had been one of his main objectives for the year.

It was announced in mid-August that Dumoulin would leave Sunweb at the end of this season after eight years with the team, which he joined in 2012 as Argos-Shimano. During that time, the 28-year-old won the 2017 Giro and finished second at both the Giro and the Tour in 2018.

For 2020, Dumoulin will join Dutch WorldTour team Jumbo-Visma, which is home to this year's Vuelta a España winner Primoz Roglic and young Belgian star Wout van Aert, and Dumoulin is keen to return to racing.

"In the coming years, I actually think that having had this injury could turn out well," Dumoulin told Ten Dam, "because I'm fresh in my head again.