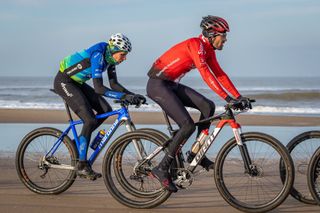 Tom Dumoulin pinned on a race number for the first time in almost six months when he lined up in a mountain bike race on the beach at Scheveningen, the Netherlands on Sunday. The Dutchman placed 6th in the strandrace, won by Continental rider Rick van Breda.

Dumoulin last competed at the Critérium du Dauphiné in June, but he was forced to abandon the race in order to undergo further surgery on the knee injury that had forced him out of the previous month’s Giro d’Italia. Dumoulin suffered a torn tendon in the Giro crash and missed the Tour de France and the remainder of the season.

In August, it was announced that Dumoulin would leave Sunweb at the end of the 2019 season to join Jumbo-Visma. He will only formally become a Jumbo-Visma rider on January 1, meaning that he lined out in Sunday’s MTB Beachrace Scheveningen in Sunweb kit and aboard a Sunweb-branded Giant bike. Cervélo replaced Giant as Sunweb’s bike supplier ahead of the 2019 season.

Dumoulin will be formally unveiled as a Jumbo-Visma rider at the team presentation in Amsterdam on December 20. The 29-year-old will join Vuelta a España winner Primoz Roglic and Tour de France podium finisher Steven Kruijswijk in a roster laden with stage racing talent.

In October, Dumoulin intimated that he would skip the Giro d’Italia, which he won in 2017, next season in order to focus on the Tour de France and the Tokyo 2020 Olympics.

"It is not the most ideal scenario," Dumoulin told NOS, "but I am convinced that I can combine the Tour and the Olympic Games."