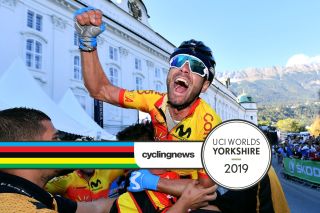 Ahead of the 2019 UCI World Championships road races this weekend, Cyclingnews is taking a deep dive into the the key teams. Next up: Spain men.

Only Belgium, Italy, and France have more medals than Spain (24). They have won gold six times, with all six coming in the past 25 years. Abraham Olano was their first winner in 1995 before Óscar Freire burst onto the scene in Verona in 1999 and helped himself to two more in 2001 and 2004.

In between, Igor Astarloa triumphed in Hamilton in 2003 in a period that saw four Spanish Worlds wins in six years. Valverde claimed the first of his six minor medals in Hamilton, before finally claiming the rainbow bands in Innsbruck last year.

Valverde is the most experienced Worlds riders in the bunch. With no fewer than seven medals, he knows what it's like to be in contention for victory and, last year, finally, felt what it was like to win. What's more, the 39-year-old is still refusing to show any real signs of slowing down; despite a sub-par spring classics campaign this year, he comes to Worlds on the back of another overall podium finish at the Vuelta a España.

Watch out, too, for Ivan García Cortina, who will provide a 'Plan-B' and is something of a dark horse. The 23-year-old is one of a rare breed – a Spanish spring Classics specialist – and has  gone from strength to strength this season. After winning a stage of the Tour of California in May, he comes here having finished third in the Grand Prix de Montréal – always a key pre-Worlds indicator.

Naturally, Valverde stands alone as leader, but there is so much more to this team. Aside from the almost-ridiculous Belgium, this has to be the next-strongest squad in the race.

Erviti and Rojas are the workhorses, and the rest of the names ooze quality. Sánchez can always be relied upon to attack, the Izagirres can be a handful, and Cortina is a young but dangerous Classics rider. Spain are far-from one-dimensional and should be expected to take risks and leave their mark on the race.

The Yorkshire circuit is not as well suited to Valverde as the Innsbruck course on which he triumphed 12 months ago. While the undulations are sharp, it lacks the obvious launchpad where he could expect to drop the riders who would out-sprint him. He needs a selective and tactical race.

There are also question marks over motivation. Last year was the culmination of an ambition that had become something of a white whale for Valverde, and he breathed a huge sigh of relief in Innsbruck. It could be argued it will be difficult to rediscover the intensity of that will to win. That said, the counter-argument would be that a more relaxed Valverde, with nothing to fear from defeat, could be liberated.

The view from Spain

There’s confidence that Valverde can be in the fight for the medals. However, with a course that’s not quite as hard as he likes, such as Innsbruck last year, there are other riders who are seen as bigger favourites, like Van der Poel, Sagan, Matthews, and the Belgians.

The thing you have to consider is that Valverde has achieved everything he can at Worlds. He has more medals than anyone else and last year he finally got the rainbow jersey. He comes here without any pressure, let’s say, but the Worlds is an occasion that is very special to him, so I don’t think there’ll be any real lack of motivation.

The squad has been almost completely shaped around him. It’s a block of riders he knows well. The only guy he hasn’t raced with as a teammate is Cortina – all the others he knows very very well, and that was the idea.

They’ve just arrived in Yorkshire on the back of a team-building training camp in Alicante. They did it for the first time last year and, since it went so well, they wanted to repeat the formula. The team spirit and unity in the Spain camp is very high. Since last year they achieved the objective of winning the world title, now it’s like a bonus year, a chance to do something more.

For the finishing circuit, we have Cortina, the Izagirres, and Luis León. They’re going to get into moves and, if one of them goes clear and Valverde is marked behind, they can assume responsibility, because they are all finisseurs and winners in their own right. Prospects of a medal are good, but there’s not so much belief in the title as 12 months ago.