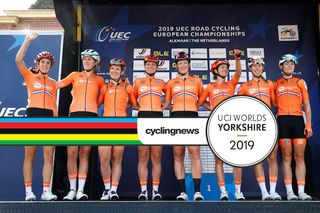 The Dutch team for the 2019 Worlds road race includes five of the riders who rode the road race at the 2019 European Championships (Image credit: Getty Images)

Ahead of the 2019 UCI World Championships road races this weekend, Cyclingnews is taking a deep dive into the key teams. Next up: the Netherlands women's team.

Keetie Hage was the first rider to win the world title in the elite women's road race for the Netherlands in 1968, and she won it a second time eight years later. The Dutch women have won the rainbow jersey on 10 other occasions: Tineke Fopma, Petra De Bruin, Leontien van Moorsel (twice), and then Marianne Vos won three, followed by Chantal Blaak and defending champion Anna van der Breggen. The Dutch national federation takes its women's programme seriously and they have built a team that houses many of the top athletes in the world. They have no shortage of champions to choose from, and often have the strongest team on the start line for the World Championships.

Belgium men - Strengths, weaknesses, and the view from home on the Worlds' most successful nation

Any one of the eight riders starting the elite women's road race on Saturday can win the world title given the right situation. The outright favourite, however, is Marianne Vos, who has won the world title on three previous occasions. She secured her first rainbow jersey in 2006 when she was only 19 years old and in her first year racing in the elite ranks. She won two more back-to-back titles in 2012 and 2013, but, in-between her victories, she has also won five silver medals.

Since returning from a two-year hiatus from the sport, she has slowly risen back to the top. This year's 150km, punchy Classics-style course almost seems made for Vos. She's in great form this year, too, having won the Trofeo Alfredo Binda, the Tour de Yorkshire, a stage at the OVO Energy Tour, four stage wins at the Giro Rosa, and victories at La Course by Le Tour de France, the Ladies Tour of Norway and the Tour de l'Ardeche.

All eyes will be on Vos, but it would be wise not to forget her teammates, defending champion Anna van der Breggen and Annemiek van Vleuten. They are both exceptional Classics riders, and are most notably breakaway specialists. Look for these two riders to be off the front, forcing breakaways, and making the race as hard as possible. If one of their moves doesn't stick, the Dutch will strike with Vos in Harrogate.

The Dutch team have strength and depth: riders who can win from breakaways, climb, time trial and sprint, and riders who race well on technical courses and under rainy conditions. Essentially, they have everything they need to win the world title, and there aren't any other teams that can rival their strength in numbers. They also have a rider for every race scenario. If a break goes up the road, you can bet the Dutch will be represented, and, if they're not, they have a team capable pf pulling back any move. They have the power to make the race, drive strategy int their favour, and the horsepower to finish it off.

There is such a thing as having too many cooks in the kitchen. When it comes to the Dutch team, anyone can win, and everyone wants to win. They're all professional athletes, and so should be able to put aside personal ambitions for the common goal of the team, but anything can happen when there's a rainbow jersey at stake. If the Dutch team can't work together as a cohesive unit, then the cooks could end up spoiling the broth.

The view from the Netherlands

Who can beat the Dutch team? Maybe the biggest danger is inside the team itself. They have three women who are the absolute favourites: Marianne Vos, Anna van der Breggen and Annemiek van Vleuten. This course looks like it was made for Marianne, while Anna and Annemiek are normally the world's best on courses like this one. They also have contenders in Lucinda Brand and Floortje Mackaij.

Everyone wants to win and so it will be very important to create a team whereby everyone will be happy with a teammate winning, too. They will, of course, say that there are no problems inside the team, but I know that they don't like each other. Overall, the team is so strong that even if they are not cohesive, even with those problems, they can win.

For me, the big favourite will be Marianne. It's so fantastic how she has come back from a black period. She has worked for a year with Louis Delahaije, who is also Annemiek's coach, and he said that his first task was to keep her fresh, so that she can be stronger in the finals. He also said that when he started to work with Annemiek in 2012, he had to give her a little bit more training each year, whereas when he started working with Marianne last year, it felt like the only thing he needed to do was force her to put on the brakes.