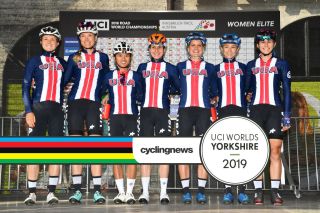 Ahead of the 2019 UCI World Championships road races this weekend, Cyclingnews is taking a deep dive into the the key teams. Next up: United States women.

The United States doesn't have a longstanding history as a winning nation in the elite women’s road race at the World Championships. In fact, the last time the US secured a world title in the event was back in 1980, with Beth Heiden, and before that it was in 1969, with Audrey McElmury. There have been glimmers of silver and bronze throughout the decades, however, particularly through the 1970s, '80s and '90s, from legends like Connie Carpenter-Phinney, Rebecca Twigg, Janelle Parks, Ruthie Matthes, Inga Thompson, Laura Charameda and Jeanne Golay. And then there was nothing, for a very long time, until Megan Guarnier eased the medal drought with a bronze in her home World Championships in Richmond in 2015.

The USA’s near-40-year dry spell in the elite women’s road race could very well break thanks to puncheur-sprinter Coryn Rivera. The California native arrives as one of the favourites to contest the title against the likes of Marianne Vos (Netherlands) and Marta Bastianelli (Italy).

Rivera’s characteristics as a rider are well-suited to the 150km Classics-style course that starts in Bradford and finishes on technical circuits in Harrogate. She’s a former winner of long and hilly one-day races like the Tour of Flanders and Trofeo Alfredo Binda, but has shown her pure speed on occasions, winning Ride London Classique, and stages at the Tour of California and OVO Energy Women’s Tour.

Indeed, Rivera carries her nation’s best hope for a world title in the elite women’s road race in Yorkshire.

No matter how strong, skilled and well-suited to the course Rivera might be, she cannot win the world title on her own. She will have a fleet of time trial specialists at her service, which is largely what makes the American team so competitive in comparison to the powerful Dutch squad. Rivera’s key support riders will include Chloe Dygert, Ruth Winder, Leah Thomas, Tayler Wiles and Katie Hall.

Having a fleet of time triallists at her disposal will be useful when it comes to holding the field together and keeping dangerous breakaways at a manageable distance. Her fleet can only take her so far, however, and there will come a time when she will have do the rest on her own.

It’s a long race and many predict that the peloton will arrive onto the Harrogate circuits devastatingly small. While Rivera may have all the support in the world during the first part of the race, she could very well be without teammates in Harrogate. If that’s the case, she will need to be fully confident in her own strengths, skill and savvy if she wants to get to the finish line first.

The view from the USA

This team has a now not-so-secret weapon in Chloe Dygert Owen after Tuesday's individual time trial performance. The 22-year-old dominated last month's Colorado Classic – taking four stages, the overall and all of the classification jerseys – not only because she was up against a considerably less-deep field than she'll see in Yorskhire this week, but also because she was obviously on another level. That level was on display Tuesday when she crushed the best in the world over the 30.4km Worlds course.

USA Cycling has brought one of its strongest teams ever to the women's elite road race, with a talented group of riders who are all winners in their own right. They can make breaks, weld them back together, and really make this a difficult race.

It's true that Rivera is on fine form at the moment, and the course suits her skillset well, but bunch sprints are always a crapshoot, and the team has the option of using Dygert Owen as a spanner in the works. As we saw on Tuesday, give her some room and she will ride away with the race. Dygert Owen is in her element when she's alone on the bike pouring everything into her effort. Using her to weld moves back together would be the equivalent of having a Formula 1 car in the garage and only using it to pick up groceries.

Dygert Owen's pack experience is limited, and her kilomteres riding in a field of this quality are even more rare, but if the US team can keep her protected and figure out a way to launch her off the front as the kilometres tick down, she'll be in with a chance, and at the very least make the other teams burn a lot of matches bringing her back while she's emptying her tank off the front.