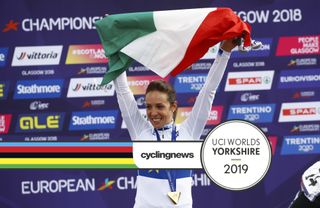 Ahead of the 2019 UCI World Championships road races this weekend, Cyclingnews is taking a deep dive into the the key teams. Next up: Italy women.

Italy have only secured five world titles during the 60-year history of elite women’s road race at the World Championships but they have a total medal count of 21 across gold, silver and bronze. Alessandra Cappellotto was the first Italian woman to win the world title in 1997. It would be 10 years until the next winner, a solo victory by Marta Bastianelli in 2007.

The nation then had a series of unstoppable victories; Tatiana Guderzo won in 2009, and Giorgia Bronzini took back-to-back wins in 2010 and 2011, all ahead of Marianne Vos.

Marta Bastianelli is Italy’s best shot at a world title in Yorkshire. She won her first world title in 2007, beating Marianne Vos and teammate Giorgia Bronzini.

Her honeymoon period in the rainbow jersey came to an abrupt end when, on the eve of the Beijing 2008 Olympics, it emerged that she had returned a positive test for the stimulant fenfluramine, which she argued was contained in an appetite suppressant. An initial one-year ban was extended to two after the UCI appealed to the Court of Arbitration for Sport.

Bastianelli has since rebuilt her career, experiencing the best season ever under Team Virtu in 2019. She won Women’s WorldTour races at the Ronde van Drenthe, Tour of Flanders and PostNord Vargarda WestSweden. Vos has also had a dominant season but if anyone is capable of rivaling the dominant Dutchwoman for the rainbow jersey, it’s Bastianelli. She’s done it before, can she do it again?

The women will race 150km starting in Bradford and travel north before looping back south toward the three undulating finishing circuits in Harrogate. It’s a traditional Classics-style parcours and suits punchy riders who can handle the distance. The Italians not only have one of the best one-day racers in Bastianelli, but a team that is largely comprised of Classics specialists such as Elena Cecchini and Elisa Longo Borghini, either of whom could win if the right situation arises. If the race comes down to a larger bunch sprint, they also have a card to play with the first-year elite sensation Letizia Paternoster.

It will take the strength of an entire team to win the world title in Yorkshire. While the Italians have one of the strongest contenders in Bastianelli, her support system lacks depth. Cecchini and Longo Borghini cannot be expected to take on the powerful eight-strong team that the Dutch will field. If the race comes down to the strongest team, the Dutch are a shoo-in to win the world title. If it turns into a race of attrition, whereby only the very best of the peloton arrive in a small group at Harrogate, Bastianelli could very well in her second rainbow jersey.

The view from Italy

Certainly, Marta Bastianelli will be the captain because she’s very fast. She has also had an impressive season so far, with a lot of victories, and among these victories was the Tour of Flanders. Not only does she arrive at the World Championships in good shape, she also has a clear head in the sense that she found a team for next season with Alé BTC Ljubljana.

I had the possibility to speak with her over the last few days and she is confident and will definitely be the main captain of the Italian team. We have to give a look to Latizia Paternoster, too. She is very young but very talented. We need to consider, however, that this is her first time competing at the World Championships with the elite women. On paper, she will not be the first option for Italy, but maybe she is a good second option.

Italy remains strong but, looking at the whole team, in my opinion, they are not on the same level as the Netherlands. The Dutch women are the favourites. Beyond them, Italy can play a good role in this Worlds.