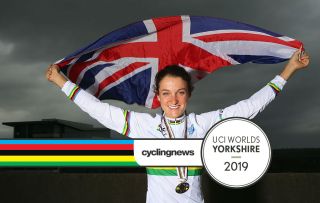 Ahead of the 2019 UCI World Championships road races this weekend, Cyclingnews is taking a deep dive into the the key teams. Next up: the Great Britain women’s team.

Great Britain have played a consistent role in the elite women’s road race World Championship, winning a rainbow jersey in decade-long intervals since the iconic Beryl Burton won the nation’s first world title in 1960. Burton secured her second world title, the only British woman to ever do so, seven years later.

Her double honours preceded titles from Mandy Jones, Nicole Cooke and, most recently, Lizzie Deignan, who took the rainbow jersey five years ago on the streets of Richmond, in the USA.

Great Britain is all-in to support Lizzie Deignan in her attempt to win a second world title on home soil at the elite women’s road race in Yorkshire. Deignan returned to competition in April, eight months after the birth of her daughter, with the newly formed women’s team Trek-Segafredo. She has given herself a two-year window to compete and has been vocal from the start about her intentions: win the world title at the Yorkshire World Championships and the gold medal at the Tokyo Olympic Games.

The British have a proven winner in Lizzie Deignan. There is also something to be said for the home crowds and the home-team advantage – for the benefits that the British team could gain over visiting teams just by racing on home soil, familiar roads, and in front of family, friends, and compatriots. The idea that an athlete stands a better chance simply by virtue of racing at home extends slightly further for Deignan. She grew up in nearby Otley, and the women’s peloton will pass through her town on the way to the finishing circuits in Harrogate.

Pressure can play an interesting role in success or failure. Too much pressure and an athlete can crumble under its weight, but striking the right balance can help an athlete flourish. Deignan will have more pressure than almost any other athlete on the start line in Bradford: she’s put everything into winning a second world title, she’s the home favourite and the sole leader of the British squad. How well she handles such pressure and expectations remains to be seen. Also, the British might have the home-team advantage, but they don’t have the strength or depth of the Dutch.

The view from Britain

The British team is certainly focused on Lizzie Deignan and hopefully getting her across the finish line first. She’s coming back from having a baby and she’s back racing her bike and about to take on the World Championships, which is absolutely incredible.

She has shown form this season with a victory at the OVO Energy Women’s Tour, and the team will be all-in for her.

They also have a good team of riders to offer support to Deignan. There are Nikki Juniper and Anna Henderson, who are very good on the domestic race circuit. There are also Lizzy Banks, and Hannah and Alice Barnes, the two sisters, who are showing a lot of form and will be a real boost for the team to protect Deignan.

In terms of weaknesses, it’s difficult for any team to be conceived as strongest when they are up against the likes of the Dutch. The Netherlands have a team of race winners; any one of them could effectively win the race on Saturday. For me, the British don’t have that same depth within the squad, but they do have a chance with Diegnan, and it will be all about getting her to the finishing circuits and getting her in the mix. It’s an incredible circuit – technical, challenging – and it will lead to unpredictable racing.