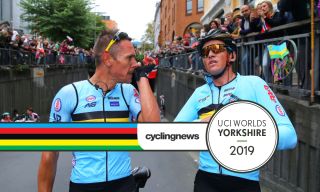 Ahead of the 2019 UCI World Championships road races this weekend, Cyclingnews is taking a deep dive into the the key teams. First up: Belgium's men.

Belgium is the most successful nation in the history of the elite men’s Road World Championships road race, with no fewer than 26 titles through 18 different world champions. While Italy have more medals in total – 55 to 49 – they only have 19 rainbow jerseys to Belgium’s 26. Only five riders have won Worlds three times, and two of them are Belgian: Eddy Merckx and Rik Van Steenbergen. Their last win came in 2012 courtesy of Philippe Gilbert, who’s among the favourites on Sunday.

Like The Stone Roses’ eponymous debut, or Taylor Swift’s 1989, this squad is all killer no filler. Declercq is arguably the only rider who you can completely write off as a contender but, even so, the so-called ‘Tractor’ will almost certainly be the most visible rider in the peloton on the opening loop as he controls the early proceedings.

While the likes of Naesen, Wellens, Lampaert, and even Teuns could all make a case for themselves on this course, there is a hierarchy, at the top of which sit Philippe Gilbert and Greg Van Avermaet.

Gilbert is the veteran, the former world champion who has recovered from a barren spell to reaffirm his predilection for the big occasion in the last couple of years, ticking off the Tour of Flanders and Paris-Roubaix on his Monument bucket list. Despite his age, the 37-year-old is in fine form, bouncing back from Tour de France rejection to win two stages of the recent Vuelta a España and set tongues wagging about a possible repeat of his triumph in Valkenburg in 2012.

Van Avermanet, meanwhile, is the thoroughbred Flandrien who was once the nearly-man of Belgian cycling until his Olympic victory in 2016 and subsequent skittling of the 2017 spring classics. The past couple of years haven’t been quite so fruitful but he remains one of the best one-day riders in the world, and also has form to his name with a recent victory at the Grand Prix  de Montréal.

And what of young Remco Evenepoel? The 19-year-old, who won the road race-time trial double in the junior category last year, has astounded this year after skipping the U23 ranks to join the elites. This will be by far the longest race he’s ever done. He has no experience. He’d be the youngest elite world champion in history. It would defy all logic. Then again, what has been logical about Evenepoel’s story so far?

Depth. This is, on paper, the strongest squad in the race, and by some distance. They have multiple credible contenders and that means multiple headaches for their rival teams, who cannot mark all of them. Moves will come and go on the finishing circuit and Belgium could feasibly have a rider up the road at all times. Tactically, that puts them in a position of strength, essentially multiplying the situations from which a Belgian winner could emerge.

Depth. As-ever, the sword is double-edged, and the luxury of that surplus of options has the potential to become a headache itself. The obvious point of comparison is Deceuninck-QuickStep, Belgium’s leading trade team. They’ve used their strength in depth to devastating effect in the last couple of years but not so long ago they were losing from three-on-one situations. With a world title on the line, how committed will each individual be to the collective cause? Strong management is needed to deliver the clarity and cohesion to cut through the egos. National coach Rik Verbrugghe has a job on his hands.

The view from Belgium

The expectations are clear. It’s a circuit that suits us, it’s like a Classic, in between the Ardennes and Flanders, which means, given we have a lot of Classics specialists, it’s a circuit where we can do something. With that team, which is on paper the strongest of the bunch, something nice is possible.

Rik started with a first selection of five names: Gilbert, Van Avermaet, Evenepoel, Naesen, Teuns. For the last three tickets, there was one for a helper – Declercq or [Laurens] De Vreese – and two for guys who can ride the finale. You had Stuyven, Vanmarcke, Wellens, Lampaert, De Plus, Benoot… a lot of guys. That created stress, and incomprehension about having to ride against each other for those two spots. Rik knew he would have to disappoint a lot of guys.

The relationship between Gilbert and Van Avermaet is ok, I think. They will ride their own race and designating the leader will depend on how they feel in the finale. They are two professionals with experience, they know how to handle it, and I have the feeling Rik is rather sure about that. I also don’t have the impression the problems of the past will be a problem now. We’ve seen in previous years the Belgian team is a good block, not just individuals. Rik can make a good block, I’m confident about that.

As for Evenepoel, in my eyes he must attack far from the finish, as he’s done a few times this season. With a 19-year-old, you have to let him play his card and put the other guys in the chair to ride the finale. Wellens also has to go early. Then we have a lot of guys for the finale, and two leaders to wait as long as possible to play their cards in the real finale.

Greg knows it’s one of his last chances to be world champion, and it’s the same for Philippe, even though he has less stress as he’s won before. Both are aware of the big chance they have here in Yorkshire.