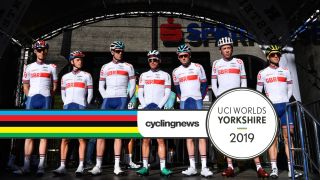 Ahead of the 2019 UCI World Championships road races this weekend, Cyclingnews is taking a deep dive into the the key teams. Next up: Great Britain men.

Tom Simpson (1965) and Mark Cavendish (2011) and are the only British riders to make the top step of the podium at the World Championships, with the latter collecting another medal at the championships in 2016. For all the recent dominance at Grand Tours, the British rarely get their act together when it comes to one-day racing at the highest level. The 2013 nadir is behind them, and in the years since then, Ben Swift has been the most consistent performer.

Former professional Matt Brammeier has assembled a team around Ben Swift with the national road champion penciled in as the designated leader of a small but perfectly formed squad. This is very much a squad created in Brammeier’s image with defined roles, collaborative thinking, and a no-frills, no-nonsense approach. He has picked the best riders available.

Swift has underrated qualities when it comes to races of this length, having made the podium twice in Milan-San Remo and the top four at the Worlds in Bergen two years ago. Incredibly, at this stage last year the 31-year-old was fighting to save his career after two fallow years at UAE Team Emirates but wisely chose to return to Team Sky/Ineos on a one-year deal rather than pursue interest from Lotto Soudal, who later turned their attention to Adam Blythe.

Despite picking up another injury in the spring, Swift has rallied with a string of consistently impressive rides. He looked like a new rider at the Tour de Suisse in June, duly won the Nationals, and in the second half of the calendar has stayed upright and healthy. He can't do what Alaphilippe, Van Avermaet and Sagan can do – if he could, it would have happened by now – but he remains a class act both on and off the bike.

Missing Luke Rowe is a massive blow, but the rest of the Team Ineos core will be crucial when it comes to supporting Swift. Although he is no longer a one-day threat, the deeper Ian Stannard can go in the race, the lesser the burden will be on Doull and Thomas.

Adam Yates' role will also be pivotal. The road will decide whether he or Geoghegan Hart will last the longest when it comes to supporting Swift but the Mitchelton-Scott rider could provide the perfect foil for Swift when the race ventures beyond the 260km mark and the race enters its final wearing down process.

Yates' record in the road race is nothing to write home about with 37th his best result, but his rides in the Canadian races suggest that he is over his Tour de France slump. On current form, Thomas is possibly the weakest link but he's also the most capable from the team to pull out a surprise ride.

The British team is without a standout favourite for the road race but the selected sextet represent a collective that has grown and matured together, with several of their ranks graduates of the Academy.

Five of their ranks currently pick up paychecks at Ineos and that level of familiarity will be key to their success. It could be their greatest asset as they're unlikely to be undone by individualism. This is very much a squad honed around the idea of the collective.

Racing on home roads might account for a small advantage but as Philippa York pointed out in a recent podcast on Cyclingnews modern-day pros could be riding anywhere these days and acclimatize to any difference in conditions.

Failing to gain the full quota of eight riders for the Worlds was a massive blow to the home nation and they will need to adapt their strategy accordingly. The drop to six riders means that on-road resources will need to be stretched and that the margin for error will become even more acute. Loss a rider to a crash or fall foul of a key split and the team could be brought to their knees before the real racing on the final laps even begins.

Sacrificing two riders to the likes of Belgium and France before a pedal stroke as even been pushed also means that the British teams will have to race an even more tactically astute race. They will need to balance aggression with patience while ensuring that they are never chasing the race. They have the firepower but do they have the one-day acumen for such a delicate task?

There is likely to be an overreliance on Stannard in the opening phase of the race but the loss of a fit and ready Luke Rowe is a far more significant blow than missing a Chris Froome or Simon Yates. Rowe could fulfill the roles of two or three men, while still providing cover in the later phases of the race.

The view from Great Britain

The gold standard for Great Britain at the elite World’s is the unit that propelled Mark Cavendish to the rainbow jersey in 2011. That team was borne of several years work and, unfortunately given this is a home World Championship, eight years on Great Britain seem more of a work in progress.

They qualified only six riders rather than eight, Simon Yates – possibly the country's most incisive winner – is absent, and Geraint Thomas is riding even though he did not feel he was in form good enough for the time trial. There is individual strength aplenty, although it is uncertain how Owain Doull and the ever aggressive Tao Goeghegan Hart will react after the Vuelta a España.

Ben Swift is well able to get to the finish of a long, nasty day out, particularly if it’s wet as it may well be here, but the team doesn’t have a prolific winner of the stamp of Van der Poel, Alaphilippe or Gilbert and they will have to watch, wait and hope things fall into place.