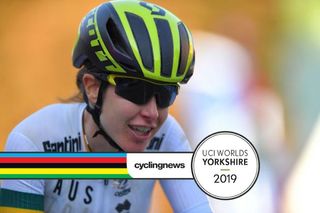 Ahead of the 2019 UCI World Championships road races this weekend, Cyclingnews is taking a deep dive into the the key teams. Next up: the Australian women's team.

It's hard to believe that one of the strongest nations competing at the UCI Road World Championships – Australia – has never won the world title in the elite women's road race. It's not for lack of strength or talent. In fact, they have six combined bronze and silver medals through the efforts of Elisabeth Tadich, Anna Millward, Rachael Neylan, Oenone Wood, and in the last two editions of the race through Katrin Garfoot and Amanda Spratt.

Amanda Spratt is Australia's best chance of winning a first-ever world title for her nation at the Worlds road race in Yorkshire. She secured the silver medal last year on a brutally hard and mountainous course in Innsbruck, Austria.

She has told Cyclingnews, however, that this year's punchy Classics-style parcours suits her much better because of its similarities to the Ardennes Classics, which she targets every year. Last year, she was third at Amstel Gold, fifth at Flèche Wallonne and second at Liège-Bastogne-Liège. This year, she sustained a head injury early in the season but managed 11th place in all three Ardennes races.

Not only is she in top form coming into the elite women's road race, she has the perfect combination of savvy and punch for the 150km event. She's revelling in the opportunity to race for the world title and told Cyclingnews that she expects the race to be a "smash fest" on Saturday.

Spratt is one of the best tacticians in the women's peloton. She is the road captain at trade team Mitchelton-Scott and has a keen eye for the winning breakaway. She is so versatile that she can win punchy one-day races and podium at a mountainous stage race like the Giro Rosa.

Australia doesn't have a team to match that of the eight-strong Dutch squad, but they have a lot of power. Spratt's team will play a large role in the outcome of her race. The team have Classics specialists in Tiffany Cromwell, Jessica Allen and Lauren Kitchen, and they also have strong climbers in Brodie Chapman and Lucy Kennedy, and a sprinter in Chloe Hosking. The team have a potential winner in Spratt and so they will be going into this World Championships motivated to finally bring home the rainbow jersey.

There isn't any team on the start line, including Australia, that can rival the Dutch team that includes Marianne Vos, Anna van der Breggen and Annemiek van Vleuten. That will put more press on Spratt's shoulders, and even though she will rely on the work of her teammates for as long as possible, eventually she will be responsible for trying to win the race. The good news is that Spratt is convinced the race will be so hard that only a select group of riders will make it to Harrogate to contest for the win. She will undoubtedly be one of them.

The view from Australia

Everyone's talking – quite rightly – about the wealth of talent in the Dutch squad, but Australia have so many cards to play, too. Amanda Spratt is the obvious choice as leader, both on the strength of her silver medal at last year's road race and her talent more generally, but then they also have that strength in depth in Brodie Chapman, Lucy Kennedy, Tiffany Cromwell, Lauren Kitchen and Chloe Hosking.

Depending on who works when, Chapman and Kennedy could still be up at the front towards the end of the race, while Cromwell and Kitchen have proven themselves on tough, Classics–style courses like this one. Hosking is then one of the fastest sprinters, if not the fastest, in the race, and would be a massive danger if she's able to get over the climbs.

A couple of relatively late substitutions in the seven-rider team due to injury – two weeks ago – saw Hosking and Jess Allen coming onto the squad to replace Grace Brown and Sarah Roy. While Hosking's sprinting talent is obvious, Allen is also a proven, talented rider, and no one on the team will have missed a beat as a result of the change. It may be her first senior Worlds, but, as the 2011 junior time trial world champion, Allen knows exactly what to expect, and what's expected of her.

Spratt, though, is the rider most likely to be in the mix for the finale, and, providing she's on a good day, we can expect everyone to be working for her. She knows the Netherlands' Annemiek van Vleuten's strengths, thanks to them being teammates on their Mitchelton-Scott trade team, and I'd expect the Australian team to in fact be capable of holding its own against the eight-rider Dutch squad on Saturday – or at least give it a good go.