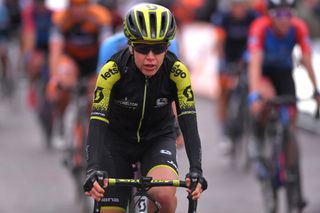 Amanda Spratt is revelling in the opportunity to compete in the elite women’s road race at the UCI Road World Championships in Yorkshire on a punchy parcours that suits her perfectly. The Australian is predicting a 'smash fest' of a race, whereby only the absolute strongest rider will win the world title.

"I like this course a bit more than last year’s in Innsbruck," said Spratt, who secured the silver medal behind Anna van der Breggen (Netherlands) at the previous year’s event.

"It’s a bit more unpredictable. It’s going to be a race of attrition. You have to be punchy and strong but also smart. I like that style of racing where you have to think a bit and pick a right moment. I like to be aggressive and pick a good moment to attack."

Spratt will lead an Australian team made up of Jessica Allen, Brodie Chapman, Tiffany Cromwell, Lucy Kennedy, Lauren Kitchen and Chloe Hosking. She’s confident that her team will be able to support her efforts to win the world title. She’s also under no illusion that the Australian roster is as strong as the eight-rider Dutch team that includes Marianne Vos, Annemiek van Vleuten and defending champion Anna van der Breggen.

"For sure, the Dutch are the ones to beat," Spratt told Cyclingnews. "You look at their line-up and think any one of them could win the world title. It will be interesting. You have to look at them. If you go up the road without a Dutch rider, you have to think, 'Is that the smartest move or not?'

"We have a strong Australian team for a course like this, which is exciting. Our riders have a lot of experience. Jess Allen is a our debutant, but she’s proven to be such a strong domestique at my Mitchelton-Scott team. We also have Lucy Kennedy and Brodie Chapman, and then Chloe Hosking is going into it with good form and will be a good card to play, if she can go deep into the final."

The women will race 150km starting in Bradford and travel as north as Masham, in North Yorkshire, before looping back south toward the three undulating finishing circuits in Harrogate. Spratt says the Classics-style course that is akin to the Ardennes races suits her much more than last year’s mountainous route in Innsbruck.

"It’s very similar [to the Ardennes Classics] and I think we are going to see the same riders who feature there do well in Yorkshire. Maybe some of the faster sprinters who can climb, such as Coryn Rivera, can get around this course as well, so it will be a mix of riders, but a hard race."

Many are predicting that the race will not be a bunch sprint, but rather a small group will arrive to the final circuits in Harrogate. The 150km distance includes over 2,000 metres of climbing through narrow and technical roads. The weather could also play a factor with expected rain in the forecast.

"It will 100 per cent be a small group at the end," Spratt told Cyclingnews. "There are a lot of challenges with 2,300 metres of altitude gain, and we don’t see bunch sprints with that amount of metres in the women’s peloton. We have two hard climbs early on and once we get to the circuits I think it’s going to be a smash fest. I don’t think anyone is going to want to take the sprinters to the line among some of the top contenders."

The Dutch were expected to dominate the elite women’s events World Championship. They have, so far, won the team time trial mixed relay. American Chloe Dygert Owen took a surprise victory in the time trial, beating silver medallist Anna van der Breggen and bronze medallist Annemiek van Vleuten by more than a minute and a half.

The Dutch are the out-right favourites to win the elite women’s road race, but bike races can often have a surprise outcome. Spratt is certainly a contender for the podium and could very well win the race if the right scenario arises.

"Surprises can happen in bike racing," Spratt said. "Everyone can be so focused on the Dutch riders and someone else could ride away with it. I definitely hope the surprise ends in my favour, that would be very nice."