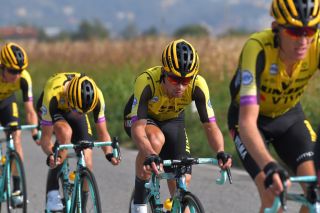 Having already proclaimed Tom Dumoulin as the final piece in the puzzle in their quest to win the Tour de France, Jumbo-Visma may well take a cautionary step back after watching Christian Prudhomme and ASO unveil their 2020 Tour canvas on Tuesday.

A mountainous route, devoid of flat time trialling kilometres, and with just a dash of sprint stages, this is undoubtedly a setback for a squad that hoped for a more balanced parcours.

The unrelenting route that was presented in Paris has much within it to be admired – above all its unpredictability and arduous first week – but the 36km of time trialling, all in a penultimate stage that finishes on a mountain, leaves Jumbo-Visma facing a number of key questions over how they split their Grand Tour assets. Dumoulin and Vuelta a España winner Primoz Roglic – two of the best time triallists in the world – have much to ponder during the off-season.

Before any line-ups or schedules are penciled in, Jumbo-Visma must wait for the route of the 2020 Giro d’Italia to be announced on October 24. At that point, the lines will be drawn and the team can start to plot schedules for Dumoulin, Roglic and Steven Kruijswijk.

However, the fact that the 2020 Tour route arguably suits Kruijswijk over Roglic and Dumoulin, in terms of terrain, will not be lost on the Jumbo-Visma management. Kruijswijk is a reliable rider, very much underrated, and a safe pair of hands over three weeks. However, unlike his esteemed co-leaders, he is not a proven Grand Tour winner, nor was he signed from a rival team to tip the balance against Team Ineos' Egan Bernal, Chris Froome and Geraint Thomas.

On Tuesday evening, as he drove home from Paris, team director Merijn Zeeman stressed that the Giro’s route announcement later this month would be crucial in deciding the team’s next steps.

"When I look to our three GC riders, I think that all of them can do well at the Tour. Primoz is good on the steep climbs, so is Dumoulin, and then when you have a hard third week, Steven is well suited. It’s hard to say who it suits best and we need to look at the route in more detail," he told Cyclingnews.

According to Zeeman, even Dumoulin isn’t guaranteed a Tour de France spot at this point in time. That’s fair, given the Dutchman’s lingering injury issues, Roglic’s Vuelta win, and the possibility of a more TT-friendly Giro.

Had Prudhomme and ASO included just one medium-flat time trial in the race, perhaps Jumbo-Visma would have been more bullish at this stage, but the sole time trial – a 36km jaunt from Lure to the summit of La Planche des Belles Filles – baffles Zeeman.

"I really don’t understand. In the Vuelta we had a team time trial and an individual time trial and there were gaps, but I think it made the race more exciting because it meant that the pure climbers had to attack," he said.

"I don’t agree with the thinking that the race is locked when you have time trials. Again, if you look at the Vuelta, the rivals of Primoz were going crazy every day to try and get time on him."

3 Grand Tours, 3 leaders, and a sprinter

Jumbo-Visma’s combinations when it comes to Giro and Tour selection could involve Dumoulin and Roglic splitting leadership between them, while Kruijswijk targets the Vuelta and then rides as a key domestique in another Grand Tour. Jumbo-Visma have no shortage of impressive all-round domestiques to serve between the Giro and the Tour but the defined roles over leadership are key. The Olympic Games in Tokyo – which Roglic and Dumoulin are keen on targeting – adds yet another level of complexity to the discussion.

"Normally, Tom and Primoz will go to the Olympics, and it’s probably not the best option to race the Olympics and the Vuelta," Zeeman said, before adding that Kruijswijk could get his chance of leadership in Spain.

"Tom’s not frustrated. His focus is on recovery with new energy and new people. He wants to enjoy racing and he’s just thinking about his first race. We need to aim for a good start to the year and we’ll plan with him his Grand Tours during the winter. We need to see if there’s a combination between the Tour and Giro but we need to see how much time trialing is at the Giro. I think that we can be really competitive over this Tour route and every team right now will have their doubts. Some will be wanting more climbs, others will want more sprints or time trials."

There is still a chance of Dumoulin, Roglic, and Kruijswijk all lining up at the Tour next year. After all, Jumbo-Visma and Zeeman have previously highlighted the need for the squad to have between three and five riders capable of competing inside the top-10 of mountain stages.

"There’s a chance but there’s also a chance we do things differently. The first step is evaluating our 2019 season and deciding on what sort of team it takes to win a Grand Tour in 2020," he said.

If the triumvirate of leaders does land in Nice in late June, the resulting shift in roster could leave Dylan Groenewegen on the sidelines. The 26-year-old has won four Tour stages over the last three years and has done so without a fully dedicated lead-out but, with so few potential stages suited to the pure sprinters in next year’s Tour, and with Jumbo-Visma stacking up for an overall bid, the Dutchman could make his Giro and Vuelta debuts in a single season.

If Jumbo-Visma were considering going all-in on GC, then perhaps the unfriendly sprint route helps them in persuading Groenewegen to aim for other objectives.

"We’re not a traditional team," Zeeman added, "but I want to have a realistic discussion with all the coaches and look at the stats over the last 10 years.

"For me, the main thing to look at is how well the route suits Dylan. We already know that the Giro will have good sprint stages, and we know that the Vuelta will start in Holland. That’s important for us, so we have options. Last year we extended the contract with Dylan and what we discussed was winning as many races as possible - not just in the Tour but other Grand Tours and other races. It’s not only about the Tour de France. Obviously, he wants to go but so do Primoz, Tom and Steven. Everyone on the team understands that there are other important and beautiful races."

Zeeman and Jumbo-Visma have created one of the most competitive WorldTour squads of the last decade and, assuming Dumoulin can find his health and form, his arrival only strengthens the team's position. Dumoulin, Roglic and Kruijswijk are amongst the best three leaders any team could have in WorldTour cycling, with George Bennett, Laurens de Plus, Robert Gesink, Sepp Kuss, Tony Martin, Antwan Tolhoek and Wout van Aert forming a polished secondary.

However, now that Zeeman has the riders he wants, the next challenge is dividing the team's resources in the best possible way – with or without the time trialling kilometres to do so.