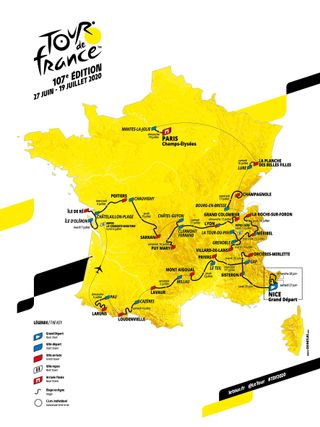 The 2020 Tour de France route was unveiled in Paris on Tuesday morning, with the 107th edition of the Grand Boucle following an unconventional and mountainous route that appears to suit the aggressive racing of French contenders Julian Alaphilippe and Thibaut Pinot rather the controlled format preferred by Chris Froome, Egan Bernal and Team Ineos.

The race includes 29 categorised climbs, six mountain finishes, gravel roads but only 36 kilometres of time trialing, all of which come on Pinot's home roads and on the steep climb to Planche des Belle Filles on the final Saturday. There is no spot for a team time trial.

Finishes at L'Alpe d'Huez and atop Mount Ventoux are also missing, with race organisers ASO instead targetting lesser known but historic finishes on the Puy Mary deep in the Massif Central, and on the Col de la Loze in the heart of the Alps as the stand out mountain finishes.

The Tour de France starts a week earlier than usual in 2020, on Saturday June 27, and ends on Sunday July 19, to allow riders to fly to Tokyo for the Olympic Games road race on Saturday July 25.

The likes of Vincenzo Nibali has already hinted that they will target the Giro d'Italia and the hilly Olympic Games road race and therefore miss the Tour de France in 2020 but Chris Froome is working hard to back next year after his terrible crash at the Criterium du Dauphine forced him to miss the 2019 Tour de France. The roads of the 2020 Tour de France will decide if Froome or 2019 winner Egan Bernal emerges as Team Ineos' leader.

Bernal, Alaphilippe, Pinot, Romain Bardet and Froome were all at the route presentation in the Palais des Congres in Paris.

The Grand Départ in Nice and mountainous first week

The Tour de France 2020 Grand Départ will take place in Nice, with the opening weekend kicking off with a 170km, three-circuit ride into the Var valley before an expected sprint finish on the Promenade des Anglais. Stage 2 climbs into the Nice Haut Pays with 3,700 meters of climbing spread across 190km. The Col d'Eze comes late, with the Col des Quatre Chemins just nine kilometres from the finish, again on the Promenade des Anglais. The two stages are likely to produce two very different winners and two different wearers of the Tour de France’s yellow jersey.

It will be the second time the capital of the Alpes-Maritimes department hosts the Grand Départ, having previously seen the race off in 1981. It is the fourth Grand Départ on French soil in the last decade, and the third in the space of five years. In 2021 the Tour de France will start in Copenhagen.

The 2020 Tour de France heads northeast after the Grand Depart, with finishes in Sisteron, Orcières-Merlette and Mont Aigoual on stage 6.

Orcières-Merlette last featured on the Tour in 1989, when Steven Rooks won an individual time trial and Greg LeMond moved into the yellow jersey. The 1840m-high ascent is not the most daunting – 11km at an average of 5.9 per cent – but a summit finish so early in the race will give an indication of everyone's overall ambitions. A second mountain finish at the Mont Aigoual observatory will be another early test for the overall contenders.  No one can afford to start the 2020 Tour de France under-cooked.

The route then heads west to the Pyrenees via Millau and Cazères in the Garonne region for a weekend of climbing. There are only two mountain stages in the Pyrenees and no mountain-top finishes, however stage 8 to Loudenvielle will climb the Col de Menté, the Porte de Balès and the Col de Peyresourde. Stage 9 from Pau to Laruns will include the Col de la Hourcère and the Col de Marie Blancque, making descending skills as important as climbing.

The first rest day will come after nine days of racing, with the riders and race caravan transferring 400km north to La Rochelle and Châtelaillon on the central Atlantic coast on Monday July 6. The racing resumes on Tuesday’s stage 10 with an 180km stage around the stunning but possibly windswept bay. It could be a chance for the sprinters, along with stage 11 to Poitiers, and the long stage south via Limoges to Sarran.

The Massif Central was often overlooked for logistical reasons until recent years but is back again in 2020 with stage 13 finishing on the 1,589-metre high Pas de Peyrol (Puy Mary) in the heart of the extinct volcanoes of the Auvergne. It will be another testing day for the overall contenders and their teams.

The second week ends with a stage from Clermot-Ferrand to Lyon and then stage from Lyon to a summit finish on the Grand Colombier, before the second rest day on Monday July 13.

The third week begins with a rugged stage to Villard-de-Lans on Bastille Day, which includes the punchy climb of the Montée de Saint Nizier de Moucherotte before the drop to the finish.

The intense stage 17 from Grenoble to Méribel includes a finish on the newly built cyclist's road to the 2,304m high Col de la Loze. It has become the seventh highest pass in France and the stage also includes the spectacular Col de la Madeleine, making it the queen stage of the 2020 Tour de France.

Another Alpine leg follows, with the peloton taking in the Cormet de Roseland, Col des Saisies, Col des Aravis and Plateau de Glières before the finish in La-Roche-sur-Foron on stage 18. A transitional stage to Champagnole brings the race north towards what might be a thrilling denouement.

In the last decade, the penultimate stage of the Tour has been mountainous on five occasions: Mont Ventoux (2009), Semnoz (2013), Alpe d’Huez (2015), Morzine (2016) and Val-Thorens (2019). Stage 20 in 2020 will be a 36km mountain time trial to the La Planche des Belle Filles. The route passes through Pinot's home village of Melisey and could give the Frenchman the chance to overcome his heartbreaking withdrawal during the 2019 race.

The 37km time trial will include some valley roads that will help better time trialists like Froome, Tom Dumoulin and Primoz Roglic but the final steep kilometres will surely offer a physical and mental crescendo to the race.

Whoever wears the yellow jersey atop the La Planche des Belle Filles, will then ride into Paris as the 2020 Tour de France winner.