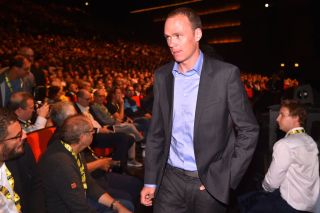 Chris Froome has admitted he faces a personal battle of rehabilitation and recovery before he can start to think about targeting the 2020 Tour de France and a record-equaling fifth yellow jersey victory.

Froome crashed hard while studying the time trial stage at the Critérium du Dauphiné in June, fracturing his leg, hip, ribs, vertebrae and elbow. He watched the 2019 Tour de France from a hospital bed but has gradually started to ride a bike and plans to ride the Saitama Tour de France criterium in late October.

Froome was welcomed on stage at the presentation of the route for the 2020 Tour de France in Paris on Tuesday, a slight limp and a lack of muscle in his right leg the only apparent consequences of his crash.

He admitted his first personal challenge is being at the start line in Nice on June 27 as part of the final Team Ineos line-up, which could include 2019 winner Egan Bernal and 2018 winner Geraint Thomas.

"Even to be on the start line at next year's Tour would be just incredible for me," Froome told Cyclingnews and other media backstage after the presentation.

"Winning would be just something else. To win after having the injuries I've had, it'd be incredible. At the same time, even being back on the bike at this moment is a big victory."

Froome's career could have ended with the crash but he never seriously thought about throwing in the towel.

"From the moment I woke up [after surgery], it was always about how I was going to get back," he said.

"When I heard that the surgery went well and they said I'd be able to get back where I left off, that was music to my ears. From that moment, it's been very positive, we've seen week-on-week improvements and hopefully it continues that way into the New Year and I'll be able to start racing in the early season next year."

Froome started riding a stationary bike a few weeks after his crash and has since begun road riding, recently climbing the Col de la Madone overlooking Nice as part of a French television interview.

The 2020 Tour de France is eight and half months away and Froome has made returning to the race that has defined his career a huge personal goal. Any final decision on whether Froome has a place in the Team Ineos line-up for the Tour will probably only be made a few weeks before the race.

"I've had an incredible recovery so far. It's gone as well as I could have hoped, even if I've still got a lot of work ahead of me," Froome explained.

"I've got to remove a plate from my hip and a whole load of screws. But hopefully when that comes out, things will continue improving. Going forward, I'll take what I can, keep chipping away and hopefully get back to where I left off."

Froome was perhaps hoping for an easier 2020 Tour de France route, with a traditional flat first week of racing that would help him find his feet and polish his form. However, the mountains begin on stage 2 and there are a total of 29 classified climbs spread across 20 days of racing, while there are just 36km of time trialling, in the form of one mountain time trial to La Planche des Belles Filles that will decide the winner of the yellow jersey on the penultimate day.

"I haven't seen a parcours that hard in the last five or six years. It's brutal," Froome admitted.

"Even though there's a lack of time kilometres, there are a lot of opportunities in the mountains. It's definitely going to be a race that is won or lost in the mountains, especially with the last TT going up La Planche des Belles Filles. It’s a brutal sting in the tail."

"It is what it is. Every year we've got to adapt to what the organisers throw at us. That's the nature of the race," he said.

"It doesn’t suit one particular rider; it suits anyone who can climb… It suits Egan pretty well…"

And does it suit Froome?

"If I can get back to where I left off, then I'd be confident on the start line," he said with pride.

"First things first, I've got to get back to where I left off and then I can start looking at how to tackle the race. That, for me, is the biggest part of the preparation."