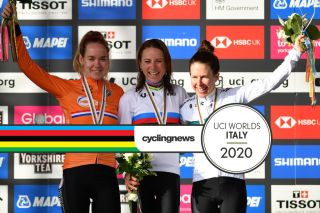 The podium at the 2019 World Championships (Image credit: Getty Images)

The top elite women from each nation have arrived in the central Emilia-Romagna region of Italy for the 2020 UCI Road World Championships, held from September 24-27 in Imola.

The elite women's time trial kicked off the event, with Anna van der Breggen of the Netherlands winning the world title ahead of Marlen Reusser (Switzerland), while Ellen van Dijk (Netherlands) took the bronze.

The time trial also saw Chloe Dygert (USA) crash and sustain a serious laceration to her left leg that took her out of the competition. She had successful surgery to repair the laceration and is recovering in hospital in Bologna. Also not competing in the road race is Amanda Spratt (Australia) who crashed at the Giro Rosa and sustained a shoulder injury and a concussion. Tiffany Cromwell will take her place on the start line.

The women's 143km road race (five laps) starts and finishes at the Autodromo Internazionale Enzo e Dino Ferrari in Imola, and features two steep climbs on each circuit – the Mazzolano and the Cima Gallisterna – and a total of 2,800 metres of climbing.

Defending champion Annemiek van Vleuten did not participate in the time trial after being sidelined with a fractured wrist sustained in a crash at the Giro Rosa. However, after successful surgery, careful consideration and discussion with the Dutch federation's medical team, she was granted permission to start the road race.

Even an injured Van Vleuten is the favourite to win the world title on the hilly Imola course. She has shown time and time again that she is a resilient rider who comes back from injury motivated to win.

This won't be the first time that Van Vleuten has dealt with a setback. She crashed and dislocated a shoulder, and then went on to sprint to third place at Tour of Flanders in 2018, and later that year, she finished seventh at the World Championships in Innsbruck, racing over 90km after crashing and breaking her knee.

The Imola course is well-suited to her with a climb on each lap of the race, so look out for Van Vleuten to go on a signature solo attack in an attempt to win a second consecutive world title.

Elisa Longo Borghini is Italy's best hope of bringing the elite women's world title back to Italy since Girogia Bornzini won back-to-back titles in 2010 and 2011. She is on the best form of her career and arrives fresh off of a stage win at the Giro Rosa where she placed third overall, and she even wore the maglia rosa for a day.

Before that, Longo Borghini secured two podiums at the Clasica Femenina Navarra and Durango-Durango Emakumeen Saria in July. She then won the time trial title at the Italian championships and had a stellar performance to secure the silver medal at the European Championships. She then helped her Trek-Segafredo teammate Lizzie Deignan to victories at GP de Plouay and La Course.

If there were ever a year for her to win the world title, this year seems to be aligning in her favour. The World Championships are on her home soil and she will have the support of a powerful team and the entire nation on Saturday.

What a year Lizzie Deignan is having with two back-to-back Women's WorldTour victories at GP de Plouay and La Course, and currently wearing the series' overall leader's jersey. She is in great form heading into this World Championship and has a real shot at the podium.

The course is hilly, but not too hilly for Deignan, and she is a proven rider on challenging terrain.

She was on the hunt for her second world title last year in Yorkshire where she was part of a decisive chase group behind Annemiek van Vleuten, but ended up being caught by the main field and finished 31st.

She just finished the Giro Rosa where she helped her team to a victory in the opening team time trial, and went on to finish on the podium in two other stages. Deignan is as strong as she has ever been and Great Britain has a strong support team to back her up with the likes of Lizzy Banks and Hannah Barnes.

She may have been hoping to fly under the radar at this World Championships, as the element of surprise could help in her efforts to win the world title, however, she is certainly on our radar as a potential winner.

If it isn't Annemiek van Vleuten winning then it's Anna van der Breggen, and vice versa. Van der Breggen arrives to the World Championship in prime condition to win her second road race world title, after securing her last rainbow jersey in Innsbruck in 2018.

Van der Breggen stated that she would fight for the rainbow jersey this year, but the Dutch team will have to back two leaders now that Van Vleuten is back in the game.

The Dutch team have proven their cohesion over the years. They are always the strongest team and they always manage to work out a strategy that allows them to win. They have taken turns winning during the previous three years with Chantal van den Broek-Blaak winning in 2017, Van der Breggen winning in 2018, and Van Vleuten winning last year.

This year is no different with the Dutch, once again, arriving with the most powerful team, and van der Breggen will be on the hunt to win.

Cecilie Uttrup Ludwig is a popular favourite to win the world title, especially if it means more comedic interviews. She is certainly a fan favourite for her sense of humour and lively personality, but under all that is a fierce competitor, and one to watch at this World Championships.

The hilly course favours her but she's also punchy and has a knack for getting in the winning breakaways. Always expect to see Uttrup Ludwig in the select front group and racing aggressively near the final of the race.

She doesn't have a team as strong as the Dutch but she's cagey, and if the right opportunity presents itself, she will be there grabbing it with both hands.

Watch for Uttrup Ludwig as an outside favourite to win the rainbow jersey.

Kasia Niewiadoma is fresh off of a second place overall a the Giro Rosa last week and will no doubt be in contention for the world title on Saturday.

Her most impressive performance this year was finishing third at the European Championships, not for the result, but because she fought tooth and nail all the way to the end, only to be beaten by Van Vleuten and Longo Borghini. She was arguably the most aggressive rider in that move and although it didn't work out in her favour for the win, it showed her fighting spirit.

Niewiadoma has never really tied it all together for the World Championships and has often showed signs of fatigue after a long season. However, with the revised calendar starting in August, Niewiadoma is just hitting her stride in Italy. The steep climbs are perfect for her and she will be there in the final to contest the title.

Mikayla Harvey was the best young rider of the Giro Rosa and a future star in women's cycling. It's been exciting to watch this New Zealander racing against the best riders in the Women's WorldTour with her team Equipe Paule Ka.

At 22 years old, Harvey started out with Team Illuminate but has developed into a world-class climber with Equipe Paule Ka (formerly Bigla) over the last two seasons.

At the Giro Rosa, Harvey finished top of the podium as the best young rider but also fifth overall behind the likes of Van der Breggen, Niewiadoma, Longo Borghini, and Uttrup Ludwig.

Watch out for Harvey to follow the decisive attacks and to stick with the best riders in the world on the climbs in Imola.

Always a contender in the Classics and mountainous stage races, Ashleigh Moolman-Pasio will be flying the colours of South Africa on a World Championship course that suits her perfectly.

South Africa only hold two spots on the start line and so she won't have the same support as the seven-strong Dutch team, but Moolman-Pasio is an experienced rider who can read a race and make quick decisions, which could go a long way into reaching the final with a select group of climbers.

Speaking of climbs, Moolman-Pasio is one of the best in the world on both long ascents and steep punchy climbs. She would have tailored her training specifically for this course, to be able to go with the decisive moves when they happen.

She was sidelined in August after a training crash ahead of Strade Bianche, but showed that she was back at her best with a sixth place overall at the Giro Rosa.

Marianne Vos arrives to Imola off the back of three stage wins at the Giro Rosa, which brought her tally to a total of 28 career wins at the women's Grand Tour.

It was her stage 3 victory in Assisi that was the most impressive on the steep finale climb to beat Uttrup Ludwig and Longo Borghini. She said she nearly collapsed after that effort, as some of her rivals did, because the climb was so challenging, but the victory showed the level of power and strength she has on steep climbs.

The Dutch team will likely split their efforts to support Van Vleuten and Van der Breggen, but it wouldn't surprise anyone to see Vos as a wildcard.

The three-time road race world champion is still at the top of her game and no doubt would like to take the reins of the rainbow jersey once again.

Spain have a real shot at a podium in this World Championships with two stand-out riders in Mavi Garcia and Ane Santesteban.

Garcia, always a strong climber, has turned heads this year with her new team Alé BTC Ljubljana. In July's kick off to the revised calendar, Garcia finished second to Van Vleuten at Emakumeen Nafarroako Klasikoa. She finished second again to Van Vleuten at Strade Bianche in August.  On both occasions, Garcia made the decisive lead groups and then attacked in pursuit of victory only to be caught by Van Vleuten right at the final.

She went on to secure double national titles in the road race and time trial at the Spanish Championships. She raced back-to-back Tour de l'Ardeche and Giro Rosa, for a total of 16 days of racing. She won the two opening stages and finished second overall at l'Ardeche, and then finished ninth overall at the Giro Rosa.

Garcia is willing to lose the race in order to win it, so watch out for her aggressive racing style in her pursuit to win the rainbow jersey.