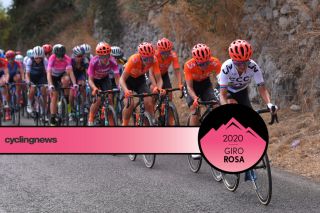 Marianne Vos (CCC-Liv) secured her third stage win at the 2020 Giro Rosa, and 28th in her career, after out-sprinting her rivals on stage 6 in Nola. There’s no stopping Vos as she hunts more stage wins in the women's Grand Tour. The former world champion paid much-deserved credit to her CCC-Liv team for their support, particularly as she reaches the end of her contract and considers her future.

"As always we take it day by day and it’s amazing to win three stages already," Vos said when asked if she could make it a career 30 stage wins at the Giro Rosa.

"It’s incredible that the team put in so much effort and of course that everything falls into place and, yeah, we’ll try again for sure. Maybe one time, but we will just see what happens and of course already it’s great to win even one stage of the Giro Rosa, to win two it’s amazing and to win three is incredible.”

The 33-year-old has reportedly signed a two-year contract to race with the newly-announced Jumbo-Visma women’s team in 2021. However, Vos was reluctant to confirm those reports or her future plans, preferring instead to focus on the success of CCC-Liv this week.

“Well, my contract is ending and for sure there are different opportunities, but yeah, for now, I’ll focus on what I’m doing now," Vos said at the finish of stage 6. "I’m very happy with the team [CCC-Liv] now and as you can see, it works very well, so that’s the main focus for now.”

The sixth stage of the Giro Rosa, which started in Torre del Greco before traversing the roads in the wake of the imposing mount Versuvius, bore a similar profile to the previous day’s stage 5 that also came down to a select bunch kick won by Vos.

Despite a similar stage, which saw the same control tactics deployed from Vos’ CCC-Liv team, the peloton still could not manage to scupper the Dutch squad’s third bid for victory.

“We had a similar tactic to yesterday,” Vos said after the stage. “With making it hard on the climbs, and it was very hard work today because it was pretty tough, it was harder than we expected it, and it was hot, it was fast, it was twisty, it was steep, it was everything."

CCC-Liv controlled the front of the peloton, over the mid-stage climbs, in an effort to shed as many of the pure sprinters as possible during the race. “I think it was a tactic that several teams were expecting from us today after yesterday,” Vos said.

"It’s still hard work and a brilliant effort from my teammates that made it a hard race and again brought me into a good position to save as much as possible and sprint against the other teams. Every day they put in so much effort that of course you want to finish it off, but it’s not as easy as it looks.”

Mariia Novolodskaia (Cogeas Mettler Look) made a solo attack off the front with 10km to go, at one point extending her gap to 30 seconds. Unfortunately for the young Russian rider crashed in the final few kilometres and the bunch contented the final kilometre to the line.

Of the final kilometres before the line, which featured cobbles and a number of twists and turns, Vos said, “there were the little attacks in the final and of course a very strong attack from Novolodskaia, who unfortunately crashed, but yeah that took away her chances so that’s a shame.

"We just tried to focus on what we had to do and I’m very thankful to the team that put me in a good position. Of course, she’s a strong rider but also we knew it was going to be hard to stay solo, it’s a shame that she crashed, and her chances were gone.”