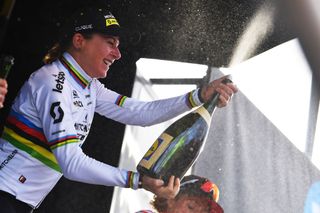 Annemiek van Vleuten (Mitchelton-Scott) picked up right where she left off with a dominant solo victory at Emakumeen Nafarroako Klasikoa in what was the first race of the revised calendar. The world champion attacked over the final ascent to build a winning lead over chasers Mavi Garcia (Ale BTC Ljubljana) and Anna van der Breggen (Boels Dolmans).

"I am super happy to begin like this. It is a dream second start to the season, it's my second race so I have won two out of two races, it can’t be better. To win solo is awesome too, I could really enjoy the last 500metres," Van Vleuten said in a press release.

Van Vleuten explained that she had just come from an altitude training camp to restart the season in Spain. "I was a little bit nervous coming from altitude just two days ago so I didn’t know how I would feel but I love to race in Northern Spain so that’s also why I came here and it was great to test the legs after an altitude block," she said.

It was her second victory of the season in the rainbow jersey having also won Omloop Het Nieuwsblad in February before the cycling season was halted due to the COVID-19 coronavirus in March.

The racing didn’t start without controversy, however, as concerns came from some teams and the riders’ association The Cyclists’ Alliance (TCA) as to whether there were proper COVID-19 coronavirus protocols in place. CCC-Liv made the decision to pull out of the race just hours before the start.

Organisers insisted that they had followed all applicable protocols set up by the UCI and in accordance with city public health requirements. They explained that only riders who return negative PCR tests would be permitted to participate in both the Emakumeen Nafarroako Klasikoa and the Clásica Féminas de Navarra held on Friday.

Organisers then confirmed the race would go ahead and provided a final start list included just 15 of the 25 teams originally listed on the race website.

While the Women’s WorldTour calendar is scheduled to begin a Strade Bianche on August 1, the Spanish 1.1 one-day races; Emakumeen Nafarroako Klasikoa (July 23), Clásica Féminas de Navarra (July 24), and Durango-Durango (July 26) - offer the peloton a chance to test their legs after five months without racing.

Emakumeen Nafarroako Klasikoa was a 118.3km race between Pamplona and Lekunberri. The race featured four Queen of the Mountain ascents; Ultzurrun (31.7km), Etxauri (59km), Guembe (78km), and Zuarrarrate (109.8km) followed by a fast descent and run-in to the finish line in Lekunberri.

The peloton crested the opening 8km climb intact and descended through the valley roads toward the second ascent. The Etxauri, a shorter climb at 6.7km with an average gradient of 6.5 per cent ended up being a major factor in the race.

The four riders made a quick descent and built a lead of over one-minute on the field led my Van Vleuten’s Mitchelton-Scott team.

The breakaway reached the third climb, Guembe, well ahead of the field but partway up the climb they looked back to see a select group of 10 riders in pursuit. It was a strong chase with Lizzie Deignan and Elisa Longo Borghini (Trek-Segafredo), Mavi Garcia (Ale), Annemiek van Vleuten (Mitchelton-Scott), Anna van der Breggen (Boels Dolmans), Clara Koppenburg (Equipe Paule Ka) and Erica Magnaldi (Cretizit-WNT).

The chasing riders caught the four leaders and a larger group of 14 crested the Guembe together.

As the new formation approached the city of Irutzun (18km to go), Garcia made a strong move and cleared her breakaway companions to head out in a solo effort toward the fourth and final climb up Zuarrarrate.

The last climb was 6.3km with an average gradient of 5.1 per cent and a maximum of 8 per cent on the lower slopes. Garcia fought to stay ahead of the chasers and started the descent with a small lead.

Van Vleuten made her winning move over the top of the climb. She jumped launching away from Van der Breggen before catching and passing Garcia on the descent.

Van Vleuten attacked again on a small riser before the finish and was racing alone for the final few kilometres.

"At the start I didn’t have any expectation to win to be honest, because Lucy (Kennedy) and Amanda (Spratt) were actually the leaders today. Just the girls weren’t really on an awesome day, so they dropped on the third climb and I came there with a small group on the top of that climb," Van Vleuten said.

Van Vleuten had plenty of time to celebrate her second victory of the season along with the restart of the revised calendar at the finish line in Lekunberri.

"I am of course happy I won but I am really very happy because I also raced tactically smart. On the final descent with five kilometres to go there was a small 300metre uphill and I had that really in my mind. We did a recon and I knew it was a good opportunity. I caught Mavi (Garcia) by surprise because I was very prepared for it and then I held on for the final four kilometres to the finish," Van Vleuten said.

"I am very happy with the day and also I want to give a shout out to the organisation with how they organised it, how they kept it safe and made sure everyone was tested here, they were very serious."

The racing will continue at the Clásica Féminas de Navarra on Friday and Durango-Durango on Sunday.