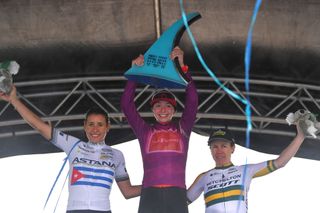 The events offered the women's field an opportunity to test their legs after almost five months without racing, along with acting as an important dress rehearsal for the strict COVID-19 protocol and safety measures that events, teams and riders must adhere to during the upcoming rescheduled Women's WorldTour.

The UCI initially announced that the revised Women's WorldTour, which was a replacement for plans that were halted due to the COVID-19 coronavirus pandemic, had retained 18 of the 22 events between August 1 and November 8.

Since that announcement, however, several events have officially cancelled, including the Postnord UCI WWT Vårgårda West Sweden TTT and Road Race, which were set to take place on August 8 and 9, and the Ladies Tour of Norway, which was due to happen from August 13-16. Most recently, the Boels Ladies Tour announced it could not get municipal permits to run the event, and stressed concern over the second rise of COVID-19 cases in Europe.

The Women's WorldTour has therefore been adjusted down to 14 events: three stage races and 11 one-day races, and a total of 26 days of racing. However, the number of events could be further reduced as China has indicated that it will impose limits on international sporting events, which would affect the Tour of Chongming Island and the Tour of Guangxi, although race organisers have not officially confirmed cancellations.

Teams will make the most out of the late-season racing to try to both salvage the calendar and gain some exposure for their sponsors, while also providing their riders with opportunities to race.

UCI president David Lappartient has stressed that the revised calendar remains highly dependent on the continuous development of the COVID-19 coronavirus, along with the health precautions, social-distancing measures, guidelines, stipulations and travel restrictions, which vary from country to country.

As the Women's WorldTour calendar attempts to navigate safely forward through a pandemic, there is a sense of excitement and high hopes among the riders, teams and fans in anticipation of a crowded three months of racing ahead.

The Classics: A reversal of races and a busy October

The bulk of the Women's WorldTour will follow 11 one-day races over the next three months. Only one round of the series has taken place, at the Cadel Evans Great Ocean Road Race in Australia, won by Sunweb's Liane Lippert in February. The season was then shut down following the UCI 1.1-ranked Omloop Het Nieuwsblad and Omloop van Het Hageland due to the rapid spread of the COVID-19 coronavirus across Europe and around the world.

The restart to the top-tier calendar will get under way at Strade Bianche on August 1, where riders will compete over the white gravel roads throughout Italy's Tuscan countryside. It would have been the next round of the series in March, prior to the cancellation of races, and so it's fitting that teams will restart their season there.

There is a large break between WorldTour races in August as the series moves to France later in the month for the GP de Plouay-Lorient Agglomération Trophée WNT on August 26 and La Course by Le Tour de France on August 29, which is aligned with the start of the men's Tour de France in Nice.

The beginning of September has been left open for the Giro Rosa, but the one-day racing will resume at full speed with the Ardennes Classics – La Flèche Wallonne Féminine (September 30), Liège-Bastogne-Liège Femmes (October 4) and the Amstel Gold Race Ladies Edition (October 10).

It's a complete reversal of the season, which normally sees the Ardennes week end the spring Classics as the riders would then shift focus to the summer stage races. In addition, the three events have swapped places. Flèche Wallonne will still take place on a Wednesday, but it now opens the Ardennes Classics. Liège-Bastogne-Liège is now the second event while Amstel Gold, normally the opening round, now closes out the Ardennes.

The big stories surrounding the Ardennes Classics might be whether Van der Breggen can win a sixth consecutive title on the Mur de Huy at Flèche Wallonne, while looking back on Niewiadoma's stellar victory at Amstel Gold and Van Vleuten's solo win at Liège under the cold rain, last year.

The riders then travel back to Belgium for the cobbled Classics, beginning with the 1.1 Brabantse Pijl on October 7 and then straight into the WorldTour's Gent-Wevelgem (October 11), Tour of Flanders (October 18) and AG Driedaagse Brugge-De Panne (October 20).

Look out for track world champion Kirsten Wild to return to the road with her Ceratizit-WNT Pro Cycling squad after taking double victories at Gent-Wevelgem and the Driedaagse Brugge-De Panne last year. As for the Tour of Flanders, it's an open race, but we can't discount defending champion Marta Bastianelli (Alé BTC Ljubljana) or other former winners Van Der Breggen, Deignan and her teammate Elisa Longo Borghini, or Marianne Vos (CCC-Liv). And always look out for Belgian sprinter Jolien D'hoore (Boels Dolmans) to win a home race.

The one-day racing season is expected to end with a bang at the first-ever women's Paris-Roubaix. ASO decided to surprise the cycling world by adding the race to the revised Women's WorldTour calendar in May. The women's peloton has never raced on the unique cobbles of 'The Hell of the North', but we can expect a series of recon sessions from most of the top teams ahead of the race. The race itself will be very unpredictable, but will mark a special and historic end to this year's cobbled Classics.

It's going to be a whirlwind, with eight major Classics crammed into the month of October.

Stage racing: All in for the Giro Rosa

The Giro Rosa and the Ceratizit Madrid Challenge by La Vuelta might end up being the only stage races on the Women's WorldTour this year. There were events that were forced to cancel due to the coronavirus such as the Boels Ladies Tour and Ladies Tour of Norway, along with the Women's Tour in Britain, while the Amgen Tour of California opted to take a one-year hiatus last year to restructure business fundamentals. The Tour of Chongming Island is still positioned on the calendar, but it could yet face cancellation if China moves forward with limiting international events.

The Giro Rosa is traditionally the marquee stage race of the season, and annually overlaps with the Tour de France in July. It will now take place from September 11-19 during the last week of the rescheduled Tour de France. There are no other WorldTour stage races or one-day events held near the Giro Rosa on the calendar, and so the race will be allowed to shine as the biggest stage race in the world for women in September.

The nine-day race will also provide an excellent opportunity for riders to prepare for what is expected to be a mountainous UCI Road World Championships in Switzerland, which has kept its original slot on the calendar during the last week of September.

The world's top riders, such as defending champion Van Vleuten and former winner Van der Breggen, along with Cecilie Uttrup Ludwig (FDJ Nouvelle-Aquitaine Futuroscope), Amanda Spratt (Mitchelton-Scott), Lucinda Brand (Trek-Segafredo), Ashleigh Moolman-Pasio and her CCC-Liv teammate Marianne Vos, who won four stages last year, will have a focus on the Giro Rosa. Many of the major teams will also rely on the Giro Rosa for its tough stages and valuable media exposure. The nine days of world-class racing equates to 35 per cent of the entire Women's WorldTour calendar in 2020.

Organisers haven't yet announced the official route of the 31st annual Giro Rosa, but it will take place in central and southern Italy. Race director Giuseppi Rivolta has confirmed that 24 teams will participate in the nine-day event, and has ensured that the race will take place under strict COVID-19 protocols.

"After never-ending video conferences, sleepless nights and endless hours of studying the health protocols of the UCI, Italian Cycling Federation, Italian Government and Region deliberations, with renewed determination and unchanged enthusiasm, we're proud to represent our cycling event that draws the attention of the whole world," Rivolta said.

"I really want to say thank you to our precious sponsors, technical and commercial partners, local and national institutions, and to all my valuable collaborators, who, during this difficult moment, have chosen to support the Giro Rosa."

Following the Giro Rosa in September, riders will then join their national teams for the UCI Road World Championships, held from September 20-27, before reuniting with their trade teams for a jam-packed Classics campaign in October.

The Women's WorldTour season will likely conclude at the Ceratizit Madrid Challenge by La Vuelta from November 6-8 in Spain. It is the first year that organisers will offer three consecutive stages, and it will end on the same day that the men's Vuelta a España ends in Madrid.

The importance of lower-level races

The Women's WorldTour will make up the bulk of the racing in the late-season revised calendar, but there are lower classed races – .1 and .2 – that will be just as important because they offer more racing days for WorldTeams, Continental teams and national teams to field rosters.

The opening three one-day races in Spain at the end of July were a good example of why the sport needs lower-level races. It isn't only so that WorldTeams can field second rosters throughout the season, but because these races are the foundation of the sport and support development in each nation. They also provide Continental- and national-level teams that don't receive invitations to the WorldTour events a place to race in 2020.

The Women's WorldTour racing might be sparse in August, but there are a series of lower-level races that are still on the calendar, including four 1.2 races in Turkey: the Grand Prix Develi, Grand Prix Cappadocia, Grand Prix Velo Erciyes and Grand Prix Central Anatolia. There are also one-day races in France, Ukraine and Belgium, such as La Périgord Ladies, the Kyiv Green Race and the Grote Prijs Euromat, and Italy will host the Giro dell'Emilia Internazionale Donne Elite stage race.

While the top 24 teams in the world will be racing the Giro Rosa in September, there are other stage races available for the rest of the teams. In France, the Tour Cycliste Féminin International de l'Ardèche is still on the calendar, as is the one-day La Choralis Fourmies Féminine and the Grand Prix International d'Isbergues-Pas de Calais Féminin. In Belgium, there is the Trophée des Grimpeuses.

The busiest time of the season will be in October, with the major Classics taking place, but there are also races happening with the Lotto Belgium Tour, a series of 1.2 races in Algeria and The Princess Maha Chackri Sirindhorn's  Cup 'Women's Tour of Thailand', and the Chrono des Nations in France.

The racing starts to fizzle out in November as the late-season revised calendar comes to an end, but the final race on the calendar is a 2.2 Tour d'Occitanie from November 10-15 in France.

The entire revised calendar is still very much dependent on the progression of the coronavirus pandemic, and events that are on the calendar now may be forced to cancel in the coming weeks.