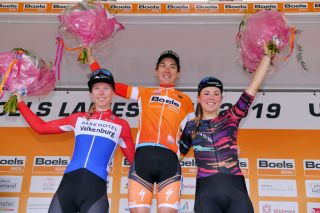 Organisers of the Boels Ladies Tour have cancelled the event that was set to take place in the Netherlands on September 1-6 as part of the revised Women’s WorldTour calendar.

On the race website on Monday, Courage Events cited their concerns regarding the spike in COVID-19 coronavirus cases in Europe and stated that local municipalities have announced they will not grant permits for the six-day event.

"The main stumbling block to organizing a sports event like the Boels Ladies Tour is the emergency regulation that an organization is responsible for the entire area of its event. For us, that is the entire course over several days. This law is clear, as a result of this a number of municipalities have announced that they will not grant a permit on the basis of this rule," said Thijs Rondhuis from Courage Events.

The UCI announced a revised calendar for the Women’s WorldTour in May, after the season had been halted due to the COVID-19 coronavirus. The Boels Ladies Tour, initially scheduled for August, was moved to the first week of September. However, Rondhuis noted at that time that the event could only take place if public health measures eased and it was safe to run the event.

He also said that the event would only continue under a socially responsible scenario, noting that the government and the regional councils were working on protocols. He said that he would not run the event unless they could feasibly comply with the protocols in all cases.

The season officially restarted for the women's peloton at the three one-day races in the Basque Country on Thursday, Friday and Sunday, while the first Women’s WorldTour race will take place at Strade Bianche on August 1. However, there are areas across Europe that have seen a spike in COVID-19 coronavirus cases since public health restrictions began to ease.

There has been a rise in COVID-19 cases throughout Romania, where the Sibiu Cycling Tour was held over the weekend, and in Bulgaria in recent weeks. The Dutch Foreign Ministry labeled Romania an 'orange zone', advising "only necessary travel" to the country.

"The recent flare-up of the virus in various places in Europe," Rondhuis cited as another main concern when calling off the Boels Ladies Tour after consultation with municipalities, sponsors, teams, riders and unions.

"The figures in the Netherlands also have a negative line. This will increase the uncertainty in the next four weeks and the financial risks will increase considerably. After all, the measures to be taken would have weighed heavily on the profile of our competition. With keeping the audience out and having to cancel many of the planned side events, there are not enough arguments to speak of a Boels Ladies Tour that we stand for."

The revised Women’s WorldTour initially retained 18 of the 22 events and was set to take place from August 1 to November 8. Since that announcement, however, several events have been cancelled, including the Postnord UCI WWT Vårgårda West Sweden TTT and Road Race, which were set to take place on August 8 and 9, and the Ladies Tour of Norway, which was due to happen on August 13-16. The cancellation of the Boels Ladies Tour brings the number of Women’s WorldTour events down to 14.