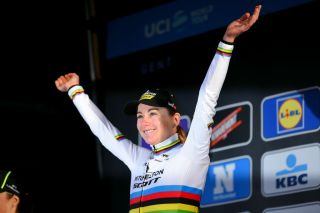 Annemiek van Vleuten (Mitchelton-Scott) claimed her third win out of three races in the 2020 road season, winning the Vuelta Ciclista a Navarra with a long-range solo attack.

It was the world champion's second day in a row atop the podium after she soloed to the win in the hillier Emakumeen Naffaroaka Klaskoa on Thursday and follows her Omloop Het Nieuwsblad victory - her only other race of the season.

"It was hard but I know when I feel my legs and they hurt I have to think differently and know this is the moment to attack.

Elisa Longo Borghini (Trek-Segafredo), who sparked the mid-race attack, held off the chasers for second place.

The Vuelta Ciclista a Navarra was, on paper, the most sprint-friendly of the trio of UCI 1.1-ranked one-day races for the women this week. However, a series of short, sharp climbs that punctuated the middle of the 122.9km parcours blew the bunch apart.

In the early kilometres of the race, the peloton kept every breakaway in check until Minke Bakker (Doltcini-Van Eyck Sport) and Clara Copponi (FDJ Nouvelle-Aquitaine Futuroscope) after an aggressive 45km of racing.

The duo were reeled in two kilometres before the Llegamos a Tiebas - a 900m climb with ramps over 13 per cent - followed quickly by the Muro de Biurrun, a short but wicked ascent pitching up to 21 per cent.

It was here that Elisa Longo Borghini (Trek-Segafredo) made a move, launching a solo attack and carrying her advantage over the Muro de Tirapu - a 3.1km climb that averages 6.2 per cent.

Behind, world champion Van Vleuten put in a surge to chase the Italian down and was followed by Anna van der Breggen (Boels Dolmans) and Amanda Spratt (Mitchelton-Scott), with Sheyla Gutierrez (Movistar) and Ane Santesteban (Ceratizit-WNT) a bit further behind.

"I thought today's course would suit different girls compared to yesterday, it was a bit punchier and I was thinking for me it was better to have the long climbs," Van Vleuten expalined. "Alejandro Gonzales, my director, was talking about the Cote de La Redoute climb from last year, that gave me goosebumps and that was really good coaching from him.

"Remebering last year on La Redoute, I just went from the bottom, didn't look back, committed and at the top there was nobody there, then I picked up Elisa (Longo-Borghini) about half-way up."

With her teammate Spratt behind, Van Vleuten let Longo Borghini do much of the work to carve out a gap of almost a minute before contributing to the work on the steep, cobbled Muro de Artajona.

Longo Borghini suffered a mechanical with 25km to go and needed a bike change but Van Vleuten waited for her to rejoin. Meanwhile, more riders were coming together in the chasing group, 1:38 behind.

"At the moment when Elisa had a mechanical, we had around one and a half minutes, I was thinking should I stop or is it better to continue with a solid pace and hopefully she could come back.

"When I saw her coming, I waited for her and I was really happy we could ride together. That is not the way to drop someone or the way that you want to win. It felt like fair play and I am happy she came back," Van Vleuten said.

Yet it wasn't long before the world champion hit out on her own, and with just over 20km to go, the Alto del Perdón - 3.1km in length - was the end of Longo Borghini. By the top, the Italian was 47 seconds behind but still well ahead of the chasing peloton at 2:26.

The gap to Van Vleuten continued to go out, with the Dutch woman sailing through the finish 1:14 over Longo Borghini. Maria Confalonieri (Ceratizit-WNT) won the bunch sprint for third, 52 seconds further behind.