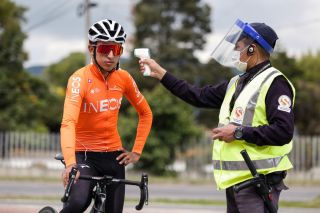 The UCI has added further detail to its coronavirus medical protocol ahead of the resumption of the 2020 season, confirming it will take ultimate responsibility for deciding whether or not to stop a race in the case of a COVID-19 case in a team.

Last month, the UCI first published a first version of the protocol, setting out the measures designed to reduce the risk of transmission, including the creation of protective peloton and team 'bubbles'.

It has now fleshed out the process for testing riders and team staff ahead of and during races, while also addressing one of the big question marks: what happens if someone tests positive?

Having previously stated that action would be taken according to the measures in place in the country in question, the UCI has now added that a steering group will immediately be set up that will report to the UCI, which will decide on a final course of action.

Details of possible response scenarios remain unclear, with regulations in each country and each specific case possibly sparking different decisions.

"In the event of a confirmed case of COVID-19 occurring within a team (riders, or team members), a group will be set up, made up of a member representing teams, runners, the organizer, UCI, team doctors, and the COVID doctor for the event," reads the latest version of the protocol.

"This group will collect all the information relating to the event and transmit it to the UCI. The UCI, after consulting the organizers and the national authorities, will take the decision appropriate to the situation."

Each race has to appoint a COVID Coordinator, who, as well as managing the patient with the local health services, will be responsible for establishing who the patient had come into contact with - either "close contacts" or "low-risk exposure contacts".

It is unclear at this point if riders who had shared an outdoor space in a moving peloton with a COVID-19 positive would be considered the former or latter, while a teammates and staff members who have spent time together indoors are more likely to be considered as a 'close contact' and so may be isolated from the rest of the team and the race.

As is the case of football championships across Europe and other sports, races could continue even if a COVID-19 positive emerges in a team, if it deemed safe to do so.

The medical regulations and protocol of each country hosting a race must be followed but if a COVID-19 case emerges within a team bubble, the UCI will make a final decision 'appropriate to the situation' on if a race continues or is ultimately stopped.

In order to enter the so-called 'team bubble' and therefore take part in a race, riders must clear a number of COVID screenings. For all races, they must undergo two separate PCR tests - the nose or throat swabs that detect the presence of the SARS-CoV-2 virus. The first has to be six days before the race, the second three days in advance.

Where a rider goes on to ride further one-day races, they must undergo another PCR test 10 days after their last test. If 14 days or more separate two one-day races on a rider's schedule, the start again with two separate tests six and three days before the second race.

For stage races, riders must always be tested twice according to the six-day/three-day pre-race schedule, even if they've been cleared for a race in the previous two weeks.

In additions to the PCR tests, all riders and staff members must complete a medical questionnaire daily on the five days preceding any race. The UCI has provided a sample, with scores for eight different symptoms, but team doctors are free to use their own tools.

During the races themselves, riders must report symptoms as above on the morning of one-day races, and on the morning and evening of each day of a stage race.

Social distancing measures will be imposed and special accommodation rules will exist in team hotels. Start, finish and podium ceremonies will also be adapted, while the UCI will be responsible for a special anti-doping protocol.

Testing for the coronavirus during races will only take place at the three Grand Tours, specifically on the rest days. PCR testing is "favoured" but not compulsory, with the UCI stating that it is to be the responsibility of the respective race organisers, who are likely to create mobile testing facilities to ensure all the teams are tested.

The protocol is based on work done by the World Health Organisation. It was lead by UCI Medical Director Professor Xavier Bigard and representatives of riders, teams, cycling's doctors and organisers, as well as CPA (Professional Cyclists Association) Women and Katerina Nash in her role of President of the UCI Athletes' Commission.