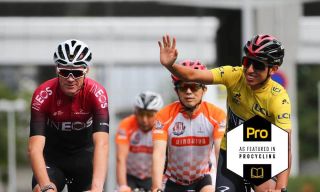 Thursday morning saw the arrival of news on Chris Froome's future that many had anticipated since the rumours first surfaced in May – he's moving to Israel Start-Up Nation for 2021. But what does the move mean for his chances of adding to his four Tour de France victories, this year and in the future? Procycling breaks down the move and rates his chances.

This article is from the August 2020 edition of Procycling.

Not too long ago, it seemed impossible to imagine Chris Froome lining up at the Tour de France in anything other than Ineos kit. Team Ineos as we know it might not exist without Chris Froome, and Chris Froome would likely not be the four-times Tour champion without Team Ineos.

But Thursday brought confirmation of the rumours that have been swirling around cycling for weeks: Froome is off to Israel Start-Up Nation at the end of this season.

A lot has changed since Froome won his last Grand Tour at the 2018 Giro d’Italia. Back then he was unstoppable – the defending champion in all three of the world’s biggest stage races. But then Geraint Thomas won the Tour’s yellow jersey. And then Egan Bernal did.

The four-time winner missed a year of racing due to his Critérium du Dauphiné crash, and in the time his career was on pause, Froome’s mantle as number one evaporated. Froome may say he’s now back to full fitness, but if he were to win the Tour again – he also turned 35 in May – his would surely be one of sport’s greatest ever comeback stories.

Underneath Froome’s polite, friendly demeanour is a ruthless champion. You don’t get to the top and win as much as he has, without being one. Sharing leadership with two teammates is not what a rider like he, with his palmarès, is used to. He desperately wants to win a fifth Tour title and regardless of how much he has publicly been saying that the most important thing is that the team wins, fighting his teammates before even facing his rivals is uncharted territory.

In the years Froome won his Tours, he never had to share and was the undisputed, outright leader. I can’t think of many athletes of Froome’s stature, across all sport, who would take well to that concept, especially when they feel they can still win, as he does.

Still, no rider since 1922 has won the Tour over the age of 35. You can count on one hand how many Tours Froome probably has left in him, whereas Bernal, at just 22, is only beginning his career.

Why would Ineos risk their long-term relationship with Bernal – who, remember they didn’t hesitate to sign on a long-term five-year deal in 2018 before he’d even won the Tour – by putting him in the position to potentially work for someone else. Even if Ineos think Froome could win this year, who knows how many Grand Tour wins could be in Bernal’s future.

There’s also the fact that one of Froome’s closest confidants at Ineos, and the person who masterminded all of his Grand Tour successes, Nicolas Portal, passed away suddenly and tragically this spring. Portal’s absence will be hugely felt at Ineos, and Froome knows that more than anyone, calling him "irreplaceable".

But now the champion is at a crossroads. First, will he ride the Tour with Ineos next month? It’s hard to imagine Froome sitting at home, on the sidelines, but would Ineos now risk taking a rider who, knowing he’s leaving, might not fall into the team line as easily as one of their many other talents would?

And if and when Froome does race the Tour again, can he even win it? Can he win the Tour without Ineos? The only thing that seems certain is that the Froome era, as we know it, is over.