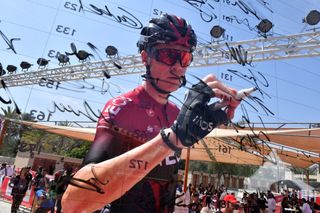 Israel Start-Up Nation have confirmed the signing of Chris Froome for the 2021 season, announcing on Thursday morning that the four-time Tour de France winner will sign a "long-term contract" on August 1 that will see him end his career at the team.

The team, which gained WorldTour status for 2020, has been linked with Froome ever since the news broke that he was in discussions over a mid-season transfer back in May.

Froome is set to share leadership at Team Ineos on this year's Tour de France with fellow previous winners Egan Bernal and Geraint Thomas, but he will regain a sole leadership role at Israel Start-Up Nation.

"This is an historic moment for ISN (Israel Start-Up Nation), Israel, Israeli sports, our many fans all around the world and, of course, for me personally – a moment of enormous pride", said team co-owner Sylvan Adams.

"I'm really excited to be joining the ISN family," said Froome. "I look forward to challenging and being challenged by their talent and continuing to strive for the success that I've enjoyed up to now. ISN's impact on the sport is rapidly expanding, and I'm energized to be along for the ride. I feel we can achieve great things together."

Israel Start-Up Nation on Froome: We're talking to some of the best riders in the world

The move signals further progression for Israel Start-Up Nation, the ambitious team co-owned by Adams and Ron Baron. Founded in 2015 as Cycling Academy, the team stepped up to the WorldTour this year, making a number of big-name signings – Dan Martin, André Greipel and Nils Politt among them – after taking over Katusha-Alpecin's license.

It remains to be seen which riders will be signed to assist Froome, though the team currently features a number of talented climbers in the shape of Martin, Ben Hermans, James Piccoli and the veteran Dani Navarro. The latter duo are currently on one-year deals.

Froome, 35, has only competed at one race since suffering a career-threatening crash at the 2019 Critérium du Dauphiné – at this year's UAE Tour before the COVID-19 pandemic interrupted the season – but his new team are confident that he can get back to his best.

In April, Froome said that he felt like his recovery from the crash, which saw him suffer a broken leg, shoulder, elbow and multiple ribs was "pretty much complete".

"We have been looking to strengthen the team for 2021 in several ways, not least of which is to become Grand Tour contenders," said team manager Kjell Carlström. "With his impressive palmarès, Chris Froome is the perfect leader to mark our arrival as a serious contender for these races, particularly the Tour de France.

"Chris' career has been extraordinary, and we believe that he has both the mindset and physical talents to win more Grand Tours with us, while also acting as a mentor to our young talents, helping them succeed."