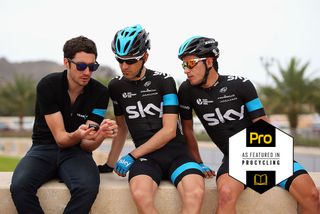 Until his tragic death in March, Nicolas Portal was one of the youngest but most successful directeurs sportifs in cycling, leading Team Sky/Ineos to six Tour de France titles, through Chris Froome, Geraint Thomas, and Egan Bernal. In 2016, after the third of Froome's titles, Procycling met the fastidious home-grown tactician to find out why he was so good at his job.

This article was published in Procycling magazine issue 221, 2016

Guide. Counsellor. Martinet. The hats worn by Sky’s lead directeur Nicolas Portal during the Tour de France are many and varied. He’s only been a DS since 2011, but he’s already directed Chris Froome's three Tour wins and was in car two, learning the ropes, for Wiggins’s 2012 victory, which has made him into one of the most successful current managers. And he’s still only 37.

Luke Rowe, Sky's Tour road captain called him the "master tactician". Froome said it would be a "huge loss" to race a Tour without him. The team’s chief, David Brailsford, says he’s "not backwards in coming forwards," and his Latin temperament can be fiery at times.

But his old mentor, Sean Yates, described him as an excellent people person, too. And what they all confirmed was that Portal’s fiercely detailed preparation for every Tour stage was impeccable. We spoke to Portal about how he prepared for this year’s Tour.

'The kindest, happiest guy I knew' - tributes flood in for Nicolas Portal

Portal says the preparation for the next Tour starts on the journey to the final stage of the Tour that’s just coming to an end.

"Okay, you’re not planning anything, really, but every year, when I’m travelling to Paris for the final stage, I do a quick overview because everything is fresh in our minds. You think about what went well, what went badly or wrong and you need to learn from. It’s important to remember what we think the key factors in the race were and not let them disappear or be forgotten.

"When everything calms down a bit in September and October you start thinking properly about the feedback from the last Tour. Then, once you have the final tracks for the next race, you start creating the new Tour plan. You try to identify what the challenges will be and the differences from the last race. Whether there are more flat stages, medium mountains or climbs will start to have an impact on the rough selection and what sort of training some of the guys will be doing when the new season starts. By December, 15 or 16 guys will know if they’re on the long list for the Tour.

"This year the big challenges were how to manage the Ventoux and the Ardèche time trial on consecutive days, and the really hard final week where there was not one easy day. Obviously we didn’t want to be chasing time in the final week so we needed to be good in the beginning and still fresh enough in the third week to maintain position.

"At home I have a look at Google Street View and know about the climbing, so you don’t need to drive the parcours to know what’s coming. When I have the GPX tracks from ASO I convert everything into another programme and I can start to study the course."

On the road again

Reconnaissance is the name of the game for Portal when the new season starts. He tries to visit as much of the route as possible. In total, he recced 10 of the 21 stages, sometimes with riders, sometimes alone.

"I try to visit as many stages as possible. After the Dubai Tour I flew into Brussels and drove a team car to Normandy to check out the two opening stages. My process is always the same. I drive a bit, take some notes, like general wind direction and road quality, and move on. Most of the time I know exactly which are the tricky sections I want to look at. That’s when the time on the ground is really helpful.

"After the Normandy stages I drove south, checked out the finish of the stage in Montauban and then the final of stage 5 in the Massif Central at Le Lioran."

Portal was a rider until the end of the 2010 season and he rode six Tours. A heart problem accelerated his retirement from the peloton. However, he still tries to fit in rides during recons.

"Where possible, I try to ride the final 50km or the last two hours because you get a different feeling for the road on the bike. It’s not always possible because of time, but I try. It’s especially helpful on the climbs. After eight hours in the car they all look hard but you’ve only got the gradients to go on, really. When you’re riding again you feel what the surface is really like and what the wind is doing. I also start to get a feel for the scenario of who is going to ride well here. I’m certainly not the only directeur sportif who does this – most enjoy trying to get out.

"While out on the recon, you’re constantly thinking about possible race scenarios. The other thing I’m thinking about is trying to match the terrain to the type of riders who could make our Tour team. Sometimes on a stage you think you need four climbers or an extra rouleur or whatever. Then it’s a case of feeding this information back into the team selection process. As you get closer to the race, the selection of suitable riders gets naturally smaller."

Notes from a big country

Portal is a fastidious note-taker, writing down information about poor road surfaces, general wind direction and tricky corners as well as thoughts that could feed into rider selection.

"I’m constantly writing things down: potential race scenarios, which riders will work on this terrain – everything. When Sean Yates was the lead DS he used the big Michelin maps that are used a lot by hikers and mountain bikers. They are packed with details. He showed me how to use them. They are really good actually. They have all the contours, the size of the roads, zones where the roads are busy or whether they’re under tree cover.

"Now there are not too many sports directors who use this kind of detailed map because they don’t know how to read them; they are too complicated. But when you have learned to absorb the information without really trying, it tells you everything. I still use them a lot but I must say I also use the internet a lot as well. When we get the GPX tracks from the ASO, I convert them into another type of computer file so I can look at the route in more detail on Google Earth. It’s a bit complicated and it’s taken me a couple of years to get it right.

"Also, I have a huge Excel spreadsheet for the Tour. I write up all my notes from my recons in there, and just before the Tour, I print the whole lot off. It’s pages and pages of data. Then, the night before each stage I reread them to remind myself what’s coming."

All the time spent preparing starts to give way to the more human aspect of his role when the race begins. He says it’s critical to try and put himself in the shoes of the riders.

"You must be really close to the riders, listen to what they say and really question yourself all the time. You need to do that every day because every morning you have to stand in front of them and lead the meeting. What you don’t want is a meeting where only the sports director speaks and it’s only his plan, because you will lose the guys.

"One part of my job is to take the time to go to the riders one by one for feedback after the race, find out how they’re feeling. They don’t have to worry about what the others might think and it gives me a chance to feed that information into the plan. So for example, someone can tell me today that 'I think so-and-so will be better than me for this job' or 'I feel strong; I feel I could do a better job'. You just try to listen to them as much as possible.

"It’s funny, I never used to like road cycling when I was a mountain biker. But once I started racing I realised that you didn’t necessarily need to be the strongest to win, just fast enough and smarter, and that’s never left me. Now I love the strategy and thinking about every move you make."

In the words of others

Bradley Wiggins: End of the road

The Yellow Armada: How ONCE shook up pro cycling

"The pre-race talks and discussions we do on the bus with Nico are immaculate. He knows every single road corner, everything, just from a mix of having ridden them as a pro and being a DS for a long time. Even now he’ll take the time to drive the full length of the course just so he knows every little bit.

"On the radio, he only speaks if it’s necessary. That way you know to listen. One thing that Nico is especially good at is staying calm whatever the situation. Sometimes the race can be going really badly, like we’ve missed a group, one of the big dogs has attacked and we’ve got the yellow jersey. He’s just totally calm, cool and collected in that situation. If he’s not stressing then why should we? Nerves, excitement and attention make for a more stressful environment – he’s the opposite.

"He was also recently a rider in the peloton. He still knows, physically, what the riders’ strengths and weaknesses are and he knows what to expect."

"He was originally mentored by Sean Yates and they got on extremely well. Sean has got exceptional experience and knowledge, Nico bought into that, and he took on all the methods – how to do the maps and everything. Technically, Nico’s a really good driver and he also speaks several languages. He knows how to get through all the hard work.

"In a group dynamic perspective he spends time with each individual and he brings a group together through an investment in time and he collectively pulls them together before the race. He doesn’t let anything fester, he deals with problems but he deals with everything in a nice gentle manner.

"He will certainly make his point, that’s for sure; he’s not backwards in coming forwards. Every now and again you see that Latin temperament burst out but that’s not a bad thing [laughs]. With experience, he knows the riders better and can marry up their suitability to the climbs, and as time passes they become more and more valuable."