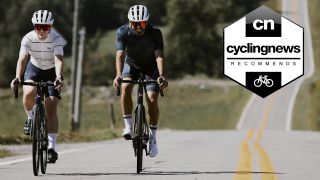 When Olympian and three-time Canadian road champion Gervais Rioux retired from professional racing in 1990 he got an opportunity to buy the bike shop that had sponsored his last year racing, that shop was Argon 18. The name takes influence from frame manufacturing, Argon being the gas that is used to weld frames and 18 being its atomic number. From a humble beginning, producing just 150 steel frames, it has gone on to become one of the leaders of carbon manufacturing.

By 2006 Argon released its first full carbon-fibre frameset, the Gallium Pro which set the brand on a path of innovation. Through expansive research and development in its Montreal-based facilities, Argon is pushing the limits in frame design working with a slew of overseas manufacturers to perfect the carbon construction process itself. By doing this, it has been able to produce super-light frames that are claimed to make no sacrifices in precision handling or snappy acceleration.

Argon 18 has been heavily involved in racing since its beginning and succeeded in triathlons, track and WorldTour racing. Argon is currently the sponsor for Cycling Canada, Australia Cycling Team, Danish National Track Team, HUUB Wattbike p/b Vita Coco as well as several triathlon and Ironman athletes. Until recently, Argon 18 was the sponsors of UCI WorldTour team Astana Pro Team, and before that, title sponsor of Bora-Argon 18.

Scroll down for our roundup of the 2020 range.

The Gallium was Argon 18's first full-carbon race bike and is a testament to its design process and painstaking attention to detail. Argon 18 states the Gallium Pro frame weighs in at a svelte 814g for a medium (Pro Disc Anniversary Edition) which has been achieved by optimising the carbon layup schedule.

Performance isn't simply measured in grams and the Gallium's geometry has been developed for racing to create a bike that is stable at speeds without forfeiting sharp handling. Argon 18's press-fit 3D system gives three levels of stack height allowing up to 25mm headtube extension. By replacing standard spacers with an integrated system, steering precision and head tube stiffness can be improved by a claimed 11 per cent.

To celebrate 15 years of the Gallium, Argon 18 has released a limited-edition anniversary model with a further 160g weight saving over the Pro Disc standard frame as well as special graphical elements to commemorate the original 2005 version.

The Nitrogen is a meeting of worlds, sharing Argon 18's successful race geometry from its Gallium road bikes with the aero profiling optimised from the brand's TT bikes. What results is a road weapon designed to cut through the air while still being sharp and controlled on climbs and descents.

Argon 18 moved its Nitrogen aero road range to a disc-only format last year, redesigning the Nitrogen frame to accommodate the new brake system. The sacrifices have been small with only a two-watt drop in aero performance and just 65g heavier than the older Pro model. The benefits far outweigh the sacrifices as on top of the superior braking performance of discs, Argon 18 claims an 80 per cent increase in fork stiffness and clearance to fit 28C tyres improving grip and comfort.

A cohesion of racing performance and endurance comfort

Argon 18 has flexed its carbon expertise to balance efficient power transfer, comfort and weight which is demanded by today's endurance road bikes. Engineers sought to create a bike that offers vibration dampening through carbon layup optimisation alone using a concept called Topological Compliance System. By fitting a bike with strain gauges and accelerometers, Argon 18 has been able to replicate road-induced vibrations and carry out testing for different frames and forks to find the most comfortable combinations.

While the Krypton CS and GF share the same geometry numbers, the Krypton GF gets a higher performance carbon layup that saves a claimed 300g from the frameset. The Krypton Pro sees further improvements in carbon quality which drops the frame weight to 870g (medium) as well as Argon 18's IST integrated carbon stem which improves aerodynamics and gives an additional 20cm of reach adjustment.

The E-119 TRI+ has been designed to excel in aerodynamics, integration and performance to create a platform that can keep up with the demands of professional riders. An evolution of the older E-118 TRI+, this new model is claimed to be almost 15 per cent more aerodynamic.

Argon 18 has developed the aerodynamics using computational fluid dynamics (CFD) to optimise for yaw angles between 5- and 20-degrees which it says are more common in real-world conditions. These same tests have lead to further aero advances with concealed brakes and 30 handlebar positions to dial in rider position.

Argon 18’s UCI-legal race machine is now lower, stiffer and faster than before

The E-118 TRI+ has been designed for elite riders that are willing to contort themselves into the ultimate slammed riding position in a bid to cut through the air as efficiently as possible. The ONEness handlebar/stem system has been updated, dropping the armrest stack by 2cm and grip position 4cm lower for a more aggressive position and improved fit for smaller riders. This setup has proven successful at the 2019 Vuelta TTT which team Astana won aboard the E-118 TRI+.

Argon hasn't ignored the geometry and the E-118 TRI+ excels on technical courses. The large aero tubes make for a stiff pedalling platform when climbing while disc brakes and thru-axles give confidence on descents.

If you're starting out in the world of triathlons or time trialling, the Argon E-117 TRI makes for a superb entry-level bike, featuring triathlon-specific geometry and the same race-proven aerodynamics from the Argon 18's older E-118 Next. Size-specific geometry and Argon 18’s 3D press-fit headset system help riders find a great fit on the bike no matter their experience or fitness.

Gravel is a hot topic in the cycle industry with most brands jumping on the bandwagon to offer their interpretation of the perfect gravel bike. Argon 18 brings its Dark Matter to the table, a fast gravel racer heavily inspired by the performance geometry and features from its race-proven road bike range.

The Dark Matter comes with Argon 18's integrated 3DPLUS adjustment, modular cable management, three bottle cage mounts, fender mounts and frame protectors on the chainstay and downtube. Healthy clearance for up to 45C gravel tyres for both 700c and 650b should give more than enough grip over most terrain.

The Dark Matter is offered in two builds that share almost identical components from HED, FSA and Prologo - where they differ is in the groupset stakes. At the more competitive end, a 2x Shimano 105 drivetrain is specced but if your budget is more generous, the Dark Matter can be equipped with Shimano’s 1x GRX gravel-specific groupset.