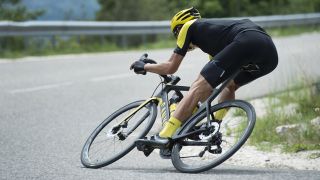 With a heritage spanning 130 years, it comes as no surprise that Mavic is one of the finest bicycle wheel makers in the world. While some of its wheelset options are highly priced – and for good reason – there's a raft of more affordable options lower down the ladder to satisfy all wants and needs.

A fresh wheelset will radically alter the performance of your bike and improve such attributes as aerodynamics, stiffness and weight, but this upgrade is often overlooked owing to the sizeable price tag associated with it. Despite this fact, the performance benefits far outweigh the initial cash outlay and you needn't spend thousands to reap the rewards.

Mavic's road-wheel catalogue is extensive and can be confusing at first glance thanks to the myriad options within each model range, but the upshot to this variety means there is literally something for every discipline. Mavic-specific tyres come standard on all but two of its wheelsets (the basic Aksium and Aksium Disc) as the company believes tyre choice has a direct bearing on the performance of a wheel.

Despite having introduced the first mountain bike tubeless system back in 1999, Mavic only recently rolled out a dedicated tubeless programme on its road wheelsets – something the company calls Universal System Tubeless (UST), which was developed in-house. Not only is this system lighter than the conventional inner-tube-equipped wheel equivalent, Mavic claims the UST system can double up as a run-flat in emergency situations.

Scroll down to see Cyclingnews' round-up of Mavic road wheels available to buy for 2020.

Verdict: A bombproof entry-level wheel for all conditions

The Aksium marks the entry point to Mavic's wheel range. Built with straight-pull spokes for added strength and stiffness, the Aksiums are low-maintenance units with a bombproof reputation.

They can accommodate tyres widths of up to 32mm and are available in both rim- and disc-brake guises. The range also benefits from a tubeless model called Aksium Elite UST, the cheapest UST option available from Mavic. Positioned one step higher than the regular Aksiums the Elite UST wheels come shod with Yksion Pro tyres, specifically designed to conform to the ultra-tight tolerances of the rim.

A 19mm internal width means wider tyres and lower pressures can be run resulting in improved performance and compliance. Pricing ranges from £179-£319.

The Ksyrium has formed the crux of Mavic's wheel line-up for the past two decades having replaced the venerable Helium hoops as a reliable, lightweight climbing wheel. As it has grown in popularity and technology so has it evolved boasting a line-up now comprising 14 distinct models.

With wheels ranging in application from rim and disc to alloy and carbon, tubeless has also been added to its ever-growing bag of tricks.

While the range covers a substantial price spectrum (£1899 for the Pro Carbon UST Discs), it's the Ksyrium Elite UST Disc wheels that offer the most in terms of balancing price with performance. Weighing just 1670g for the pair and laced up with bladed, straight-pull spokes, they are stiff and responsive – ideally suited for lumpy terrain but also capable enough to effortlessly dispatch the flats.

At first glance, you'd be forgiven for thinking the R-Sys SLR are made from carbon – they're in actual fact alloy units which appear that way due to their charcoal aesthetic. Mavic has managed to keep weight to a minimum through the use of hollow carbon-fibre spokes, which also provide lateral stiffness of the highest order.

The Tracomp technology used in the spoke design helps with compression and adds to the wheel's compliance – impressive considering the 15mm rim width lends itself to a much narrower tyre than UST-equipped versions.

The rims feature a machined surface – dubbed Exalith – for increased friction, which Mavic says improves stopping distance by 20 per cent in both wet or dry conditions. The only downside to this particular wheelset, if it matters to you, is the lack of tubeless compatibility and a disc-brake option.

Verdict: An impressive aero wheel that is as good in the crosswinds as it is on the flats

At £1899, the Cosmic Pro Carbon SL UST wheels are an expensive but popular choice. With a 19mm internal width built around Mavic's straight-pull, double-butted aero spokes, they offer a stellar blend of aerodynamics and stiffness. Two rim depths are available – 40mm (rim brake) and 45mm (disc) and can accommodate tubeless, clincher and tubular rubber.

At the upper end of the scale are the one-piece carbon Cosmic Ultimate Tubular wheels, which weigh 1250g thanks to the seamless integration of the carbon spokes, front hub and rims.

Measuring 64mm deep, Mavic dubs its Comete wheels as Hyperaero – and they certainly look the part thanks to the aggressive airfoil shaping and raw carbon finish of the rim walls.

The Comete Pro Carbon SL Tubulars are the lightest and most performance-bent model in the Comete line-up – not surprising considering the lack of disc rotors or rims hooks. Weighing just 1490g this particular set has become popularised on the UCI WorldTour by the French outfit, AG2R La Mondiale.

Adding greater stopping power to the mix are the disc-brake-equipped Comete Pro Carbon SL UST wheels. At 1755g a pair, they're on the heavier side of the weight spectrum but bring added levels of compliance and traction through the use of lower pressures.

Rounding off the range is the Comete time trial/triathlon lenticular wheel. Tubular in application it provides enhanced levels of stiffness as a result of unidirectionally weaved carbon fibre.

Verdict: A crit-specific wheel that doubles up for track racing

The Ellipse nameplate has earned a reputation over the years as a robust and hardy wheel for both velodrome and fixed-gear racing. After rigorous testing and development, in which Mavic experimented with a range of rim depths, spokes and lacing styles, the Ellipse Pro Carbon wheels were born.

Utilising the same 64mm deep profile as the Comete Pro Carbon UST rims, these purpose-built speed enhancers have been laced up with straight-pull, double-butted aero spokes for even greater levels of stiffness and aero efficiency.

They also benefit from a flip-flop-style rear hub that can accommodate a different sized rear cog on each side providing quick ratio changes based on terrain and course conditions.

Verdict: A tough and resilient wheel built for diverse and technical terrain

Catering for the gravel grinders is the Mavic Allroads, a moniker that originally formed part of the Ksyrium line-up. Now a standalone range, the Allroad comes outfitted in multiple rim widths of 22, 23, 25 and 26mm – up from the 19mm offered by its predecessor.

Available in the choice of either carbon or aluminium, the Allroad family is almost exclusively of the disc-brake variety bar one model, the Allroad Elite UST which caters for the rim-brake enthusiast.

Over and above the standard 700C formats are two 650b versions, the Allroad Elite Road+ Disc (alloy) and Allroad Pro Carbon SL Road+ which carry internal rim widths of 25 and 26mm respectively. With the ability to run much lower pressures and wider tyres than any of its stablemates, these wheels are perfect for technical dirt trails where tyre choice is of critical importance.