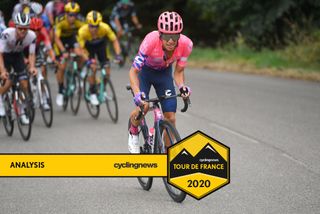 There’s genuine excitement around the EF Pro Cycling team this year as they head towards the 2020 Tour de France. In Rigoberto Urán they have one of the most experienced Grand Tour leaders in the race, while Daniel Martínez and Sergio Higuita are two of the most dynamic and exciting riders to come out of Colombia in the last few years. Both riders could shake up the race in the mountains or help mount a bid for either the GC or the teams' classification.

The team may have left some experienced riders at home, and missing Michael Woods is a shame for Canadian fans, but the team have three race debutants in their ranks, including British climber Hugh Carthy. Last year’s Tour of Flanders winner Alberto Bettiol is another rider worth watching too.

The 33-year-old goes into the Tour de France as the undisputed GC leader and road captain for EF Pro Cycling, and as one of the most experienced Grand Tour riders in the peloton.

He’s finished second in three Grand Tours, and while his very best days are probably behind him, Urán remains a talismanic figure who personifies the new era under Slipstream.

Urán finished seventh in last year's Tour de France without truly being at the pointy end of the race. This year's route certainly suits him but the dilemma for EF Pro Cycling will be over how much protection they provide their veteran leader while at the same time nurturing the hopes of Sergio Higuita and recent Dauphine winner, Dani Martínez.

On paper, the team’s Colombian trio could light up the race in the mountains.

A crash at the Dauphiné robbed us of the chance to see the pint-sized Colombian go head-to-head with the elite WorldTour climbers but his performance in Paris-Nice earlier in the year cannot be overlooked.

He was simply immense over those seven days and while his trusted crosswind tandem partner, Sep Vanmarcke, hasn’t made the cut, Higuita will find more than enough cover thanks to Bettiol and others.

This, however, is his first Tour, and only his second Grand Tour, and finishing 14th in the 2019 Vuelta doesn’t necessarily translate into Tour glory within the space of twelve months.

The team would be over the moon with a stage win from their 23-year-old and are unlikely to be placing too much pressure on his shoulders. It’s also worth mentioning that he wears the best looking national champion’s kit in the entire peloton.

It would be a tough sell to leave the Tour of Flanders winner at home, but his options in the race in terms of potential stages to target are somewhat limited.

At the very worst he’ll do a job for the team in protecting the climbers and carrying out general domestique duties, while at the same time, three weeks of racing around France will improve his Classics form after a strong start at Strade Bianche.

On intermediate stages that suit breaks, the Italian should be in the mix but the route is so hard that he’ll need to be really selective over the days he targets.

The British climber was originally slated for the Giro d’Italia but he now finds himself hurtling towards his Tour de France debut after a late schedule change.

At 26 years of age, he narrowly misses out on eligibility for the white jersey, but he could be an outsider for a decent GC position given the progress he’s made over the last two years. However, EF are likely to want to use this opportunity for Carthy to gain experience and support Uran, Martinez and Higuita.

Carthy started the year well in Provence, and the recent Dauphiné probably gave a mixed picture as to who is or isn’t in their best form. Carthy was not at his best in the mountains but his breakthrough 2019 season provided enough evidence to suggest that his career is on the right trajectory.

He gets overlooked somewhat in the UK because he’s not a Yates or on Ineos, but Carthy is an exceptionally gifted climber with a unique backstory that, in some ways, epitomizes the squad’s ethos.

The winner of an incredible Dauphiné and well-deserving of a Tour de France spot, Martínez is likely to arrive in Nice targeting stage wins rather than mount a GC challenge but EF are holding their cards close to their chest in that regard.

Winning a Dauphiné doesn’t turn you into a Tour contender – just ask Andrew Talansky or Janez Brajkovic – but Martínez compliments the experience of Urán with the explosiveness of Higuita to form a super competitive mountain trio.

His Dauphiné win was founded on brains as well as brawn, and if he comes into the final week well placed then maybe senior directeur sportif Charly Wegelius can pull off another masterstroke and help catapult the 24-year-old into the top five.

The American could pull your family out of a burning building and it would still lead to flak in comments sections on cycling websites. Such is the life for a rider who has the best American Grand Tour record in years, and won WorldTour races in a career spanning two decades, but who still falls short of some people's expectations.

It’s true, his three-week record hasn’t been great since his last top-five back in 2014, but since moving to EF, the former BMC rider has found consistency in week-long events and benefitted from having reasonable expectations placed on his shoulders.

His form coming into the Tour doesn’t look brilliant, it has to be said, but EF wouldn’t pick a rider based on reputation alone, and the team clearly feel that Van Garderen is on the up for the Tour.

There are faster riders in the team and it’s a surprise to see Simon Clarke and Magnus Cort – the latter won a stage in 2018 – miss out on a key role at the Tour de France but the Belgian gets the nod and should fit nicely into a team that has no realistic sprint options for the few flat stages within the race.

Keukeleire is a decent climber and he’s consistent over three weeks. He came close winning a Tour stage in 2017, and has a Grand Tour stage win under his belt in a reduced bunch sprint at the 2016 Vuelta.

His primary function at the Tour is likely to be around helping the climbers before the major ascents. It’s understandable as to why he’s in the team ahead of some of the time trial specialists left at home.

The team have left a lot of quality at home, which speaks volumes for the depth within the team, with Simon Clarke, Tanel Kangert, Lawson Craddock, Sep Vanmarcke and Michael Woods all missing out.

New signing Powless represents the future and, at 23, will be making his Tour de France debut.

The former Axeon graduate will be at the Tour to gain experience, while he will also be charged with supporting the squad’s leading climbers. He came through the Vuelta a España last year and now it’s time for the next challenge.