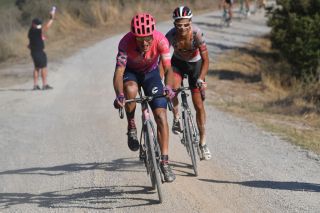 Alberto Bettiol raced generously in front of his local Tuscan fans at Strade Bianche but had few regrets after finishing fourth, proud to have animated his home race.

Bettiol hails from Castelfiorentino just 60km from Siena and so honed his racing skills on the steep county roads and dirt roads of Tuscany. Yet at Strade Bianche, he had always struggled to land a result, with two failures to finish leaving him disappointed.

On Saturday, an aggressive performance against the biggest and strongest Classics riders on the first WorldTour race of the rescheduled season was something to smile about for the EF Pro Cycling rider.

"It's cool to finish my home race and be up there in the action. We all want to respect the rules and stay but it was great to see fans out there this fourth place makes me happy and motivates me," he said, grateful for the encouragement and dowsing with water out on the dirt roads.

Schachmann: It was a tricky, dangerous Strade Bianche

“Today, the team did a really amazing job. We were focussed from kilometre zero. Everybody did what they were supposed to do and we raced as a team.

"I tried to play my cards in the final and tried to anticipate the moves and attack. It was really special for me because I was in front of my fans and racing in my region so I had a lot of people supporting me. At the end I got dropped by climbers on a climb so I have no regrets and I did my best. In the end this fourth place finish is great to restart the race season with."

EF Pro Cycling teammate and regular Strade Bianche strong performer Simon Clarke attacked on sector 8 of the Tuscan gravel, opening up the race. When the move of the formed soon after, Bettiol made sure he was there.

“After Monte Santa Marie there were only six of us in front and we didn’t talk but it was clear that we had to work together to grow the gap because there were some chasers behind," Bettiol explained, his surges and work on the front helping to ensure the move stay clear of the chasers.

"Schachmann and Formolo dropped me and maybe I paid for my previous efforts but for me I have no regrets because I tried to win this race. Sometimes you win, sometimes you lose. We all did a really great job today."