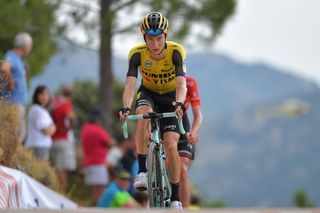 American Neilson Powless has signed with EF Education First for the 2020 season after spending the past two years on Dutch team Jumbo-Visma. Powless is currently riding in defence of teammate Primoz Roglic's race lead at the Vuelta a España.

Powless, 23, came to Jumbo-Visma from the Hagens Berman Axeon development team and has spent his two neo-pro seasons learning the trade and working for others.

Powless: You never know when you'll have a break-out moment

Like current Jumbo-Visma teammate Sepp Kuss, Powless came to road racing with a background in mountain biking and found instant success on the US domestic circuit, finishing ninth overall at the 2016 Amgen Tour of California and winning a stage at the Tour de l’Avenir with the US national team.

“Neilson is one of those guys who comes from a diverse athletic background – triathlon, mountain bike – and he’s a great athlete," said EF Education First Pro Cycling CEO Jonathan Vaughters. "Oftentimes we see those guys with broad backgrounds truly excel when they start to focus on one element, as Neilson has done with road recently."

Unlike Kuss, who signed with Jumbo-Visma at the same time as Powless and who recently won a Vuelta stage after re-upping with the team for two more years, Powless hasn't notched any high-profile results of his own, but he has grown into a solid worker for his team leaders, including during his first Grand Tour this month at the Vuelta.

"All my standout moments came from when I supported my teammates. Riding for Primož [Roglič], like I’m doing here at the Vuelta, or Steven [Kruijswijk] at the Dauphiné," Powless said.

"Being able to learn from guys who have such a wealth of experience and knowledge at the WorldTour level has been huge for my development. They have taught me so much about how to go for big results when you have the engine for that.

"I’m still working to develop my engine, and until that happens, there are so many little things I can focus on – when to spend energy, when to save energy, where to be and when in a race," Powless said.

Vaughters indicated he's ready to take a long-term approach to Powless' development and said he's sees him as part of the team's future stage-racing plans.

"I see him as a guy with a massive upside, from time trials to short stage races and eventually the longer stage races, too," Vaughters said.

"His climbing is improving every year. He can already be a leader in week-long stage races that are more time-trial focused. I think Neilson, along with Dani Martínez and Sergio Higuita, represent the next phase of our stage-race teams, and I’m very excited about it.”

Powless shares his new boss' enthusiasm about the deal and also about the chance to return to an American team.

"I had to make so many changes in my life all at once when I joined the WorldTour, and I’ve realised that being on an American team, it can help me feel closer to home when I spend so much time away from home," he said.

He hopes the change will lift him to the top step of the podium at races in the near future and in the long term.

"I want to win a bike race," Powless said. "I haven’t really thought about which one, mostly because we haven’t talked much about my race schedule yet, but any bike race. I want to win one. And when it’s not my turn to go for a result, I definitely want to be a part of many, many team wins.

"Eventually when I start a race, I want to go in as a favourite," he said. "I don’t know when I’ll get there, but that’s the aim. I hope to be one of the top general classification riders in the world in the future. I believe that if I focus on improving all the small details every day, that I will get there."