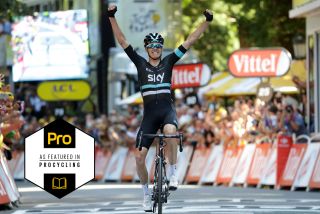 Winning bike races is so much more than just pedalling harder than your rivals, and clever tactics can often be the difference between winning and losing. Procycling asked some of cycling’s best tacticians how they beat brawn with brains.

The increasing importance of descents

"Tactics is something I’ve thought a lot about. Great as it is sometimes to be the strongest guy in the race and just use the simple tactic of waiting until the hardest moment and then pushing on, there are moments when you maybe don’t feel like the strongest guy. Those are the times when you really have to rely on tactics over pure brute force to win you the race.

"I won the polka-dot jersey the year before [2015], and the stage that finished with the descent off the Peyresourde was the first mountain stage of the 2016 Tour. We’d gone over three climbs before the final one, and on each of them I’d pushed on a little bit and taken all of the points that I could behind the breakaway. I knew my GC rivals had seen me do that, so when we came to the last one, I thought, 'We’re still all together, they’re going to see me push over the top and think that I’m just going to be going for the points again.' That only came to me in the last couple of kilometres before the summit of that climb.

I thought, 'Hold on, if I make a move over the top, they might, even if just for a second, lower their guard thinking that I’m just picking up the points. But if I carry on pushing over the other side it will be interesting to see what their response is. So why not?' I caught everyone off guard, including Nico [Portal, Sky’s DS] with the attack. There was a bit of a silence when I first moved, and then I could tell that Nico was getting into it, encouraging me.

"Tactics are still vitally important when racing, perhaps much more so now because everyone is so evenly matched. The level of racing has risen so much across the board that it’s harder to find the gains needed to win. Even though I only gained about 20 seconds in the end, days like that can make a real difference, especially if they can help keep your rivals guessing as well."

The changing face of bunch sprints

"When you work in a sprint train you quite often have those days when everything you’ve discussed from a tactical point of view comes together perfectly, but you don’t win simply because another sprinter is faster. Conversely, I’ve known days when the tactical plan has not worked but the sprinter has won because they’re so good.

"The stage that sticks out for me is the one that finished in London. We set the tempo from maybe five or six kilometres out going alongside the River Thames. No one came around us, everybody did their job, and Marcel won the sprint. From five kilometres out, Marcel didn’t see any other riders apart from those on Giant. If you want to check out how a lead-out works, that’s a good stage to look at.

"Since then, the nature of bunch sprints has changed. It’s gone from having one or two sprint trains and the other sprinters having just one or two guys to look after them, to pretty much every sprinter having a train. It’s a lot harder to get it right now. It’s become a lot more frantic.

"It was easier when I was on the team with Marcel as most teams tended to look to us and one or two others to lead out. Now, it’s chaos. Almost everyone waits until the last couple of kilometres before committing with their lead-out. Partly this is due to an increase in top-class sprinters, but also stems from the fact that there’s not one team that can sustain a lead-out in the way that Giant did that day in London. Any team that tries to gets swamped."

Marco Pinotti, Former BMC Racing DS and TTT coach on how to gain an edge

"Tactics for a team time trial depend on the route. Some riders are quicker through corners, others faster on climbs, while the time trial specialists will thrive on wide, straight roads. I study the course very carefully beforehand, assess the riders on our team and set the strategy based on that.

"If it’s a straight course you have to try to find the right balance between the riders, to place them in the right position in the line. For instance, you don’t put a small rider in front of a big rider, because the bigger man will be in the wind when he’s behind the smaller one and will end up taking two pulls and not one.

"You need to start fast and not slow, but you can go out too quickly and if that happens the team will end up paying the penalty. Riding in the second position is particularly tough because that rider has to follow the lead man and then start to pull on the front after a few hundred metres, so it’s a very big effort. He’s got to establish the pace at which the whole line will travel.

"The first man can’t do that as he’s just getting the team up to a high velocity, but not full speed, from the standing start. Then the third rider comes through and normally his task is to maintain the speed that the second man has reached, and so on for the rest of the riders in the line."

The art of breakaway success

"Being in a breakaway during the 2011 edition of Paris-Nice with Jens Voigt and Jérémy Roy was the turning point for me. I’d been in a couple of smaller breaks with Voigt the year before, but this was different. This was centre stage. In the lead-up to the race, I told a Belgian newspaper that I wanted to be the next Jens Voigt, so there was a certain strangeness to find myself in the break with him.

"Attacking is an obsession of mine. I’m crazy for an attack. I love it and I always will. I can set my own pace. If I’m in the peloton, there are always crashes, you’ve got guys getting in your way, blocking you on corners or going too fast on the descents. When I’m at the front I don’t have any of that stress. I can ride as fast or as slow as I want, and I’ve got the team car behind me, ready with food and water. You just put your hand up and 20 seconds later you have a fresh bottle.

"Although I’ve won stages in breakaways at all three grand tours, if I had to pick out one win that I really liked from a tactical perspective it would be my victory at the 2017 Critérium du Dauphiné. I got into the break with six other riders, purely with the aim of getting into the mountains jersey. At the end we had to do three laps of a finishing circuit in Saint-Étienne with the climb of the Col de Rochetaillée on it. We did a lap, which meant I knew precisely what lay ahead, and our lead was still more than three minutes with two circuits to go. I pushed hard the second time up the climb and Axel Domont was the only rider who could stay with me. We shared the work until the last climb, then  I went hard again about a kilometre from the top.

"Everything that I planned to do worked out perfectly. Well, almost. I’d planned to end the stage in the polka-dot jersey but instead pulled on the yellow."

Taking advantage of a crosswind

"Belgian riders and teams are always comfortable in windy conditions, as are the Dutch. When you grow up racing in the wind, you learn not only how to deal with it but also how to put it to your advantage.

"Back in 1994, before everyone was using online mapping and other technology to analyse the influence of the wind, you had to depend on the roadbook and your knowledge of the area, which I did at that year’s Tour of the Mediterranean. We had the yellow jersey and I had guys pulling from early on. Wilfried Peeters asked me, ‘Why have we got to pull all day? The whole bunch is laughing at us riding all day into a headwind.’ On the descents the bunch was coming around them because they were going faster than our guys on the front.

"I told him, ‘They won’t be laughing at you soon. Just give it another five kilometres.’ I had a big road atlas and I could see that at a roundabout the road went left and there would be a crosswind. I said to him, ‘Speed up at that roundabout and you’ll see what happens.’ They sped up and our riders filled the first six places on the stage. There was a crosswind on small roads and before anyone could react, the echelon was made.

"You need a mix of riders who can work and riders who can win. If you look at Fernando Gaviria’s first stage win at the 2017 Giro, we didn’t have a team there that looked like it could create an echelon. But it happened thanks to the quick thinking of the team."

Winning a Grand Tour in the mountains

"Sky line it out at the front of the bunch to make sure the pace stays at more than six watts per kilo. At that point, nobody can attack. Sky are putting everyone on the limit. They also have multiple riders who can do that, and between them they can ensure that the pace remains high for a long, long time.

"They want to avoid that situation where someone attacks, we all chase and catch them, then it all slows down and gives people a chance to catch their breath and recover. What Sky is doing is trying to remove everyone’s recovery time. So even on the sections where a climb might get a little more gradual and you’re thinking that you may get a little bit of rest, they make sure they up the pace there, to make sure that no one gets the chance for recovery.

"You can say that having that strong team provides Chris Froome with an advantage, but the advantage he has is that he can deal with this tactic better than other people. Chris has got to pedal his bike in the same way that we’ve got to pedal our bikes. He has to follow his team the same way we have to. He just has the ability to do it better and the ability to control the pace.

"His team is that strong that if he’s having a bad day he can tell them to dial it back a little bit, like we saw on the Peyresourde in the 2017 Tour. On the other hand, if he’s feeling really good, he can get them to ratchet the pace up a notch."