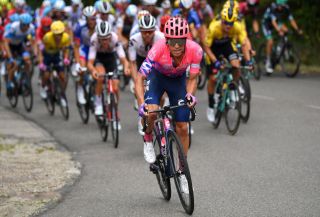 EF Pro Cycling confirmed their team for the 2020 Tour de France, naming two Americans and three first-time riders on their squad for the race which begins on Saturday in Nice.

The team brings "a strong group with general classification ambitions as well as riders who can look at stages opportunistically, given race situations," according to their press release. "We're a balance of experience and opportunity. And we're absolutely ready to go."

Heading up the veterans is Colombian Rigoberto Urán, who came second to Chris Froome in the 2017 Tour de France and who was twice second in the Giro d'Italia. Urán suffered serious injuries in a crash at last year's Vuelta a España and spent three months off the bike but said he is motivated for this year's race.

"I'm super happy to be in the team for the Tour de France. It gives you a lot of motivation because it's always a race that has something really special about it, especially when you have stood on the podium before," Urán said. "There's always a part of you that wants to do your best there, to try and get a good result, to be up there with the best."

At his side will be two fellow Colombians, both potential GC leaders: Sergio Higuita, third in Paris-Nice and winner of Tour Colombia 2.1 earlier this year, and Dani Martínez, winner of the Critérium du Dauphiné.

"This is going to be my first Tour de France and I can honestly say I've never been so excited to be racing," said Higuita. "To be going to the Tour is a huge goal for many cyclists and for me it's incredible to think that in a few days I'll be there achieving one of my biggest life goals, to line up on that start line. Also to be doing it wearing the Colombian national champion jersey makes it all the more special."

Martínez raced the Tour once before in 2018 and looks forward to his return. "It's one of the most beautiful races that I absolutely love, it's a race that I've always wanted to do. We have a really great team with a high level and to line up alongside them and be a part of it is something really huge for me."

The team also chose Hugh Carthy to make his Tour debut. The Briton said he is "nervous and excited in equal measure," while fellow debutant Neilson Powless said he is feeling "excitement and motivation."

"I finally get the chance to realise my dream and race the Tour de France, and racing the Tour de France on an American team is a super special feeling. I think that we're also bringing a really strong team, and that too is really motivating. With Dani just coming off of the Dauphiné win that's incredibly motivating for me and the rest of the team," said the 23-year-old American.

"Though I'm new on the team, I'm super excited to be able to do the biggest race of the year," Keukeleire said. "I've had some experience now at the Dauphiné of racing with the Colombians. I hadn't raced with them before, but I think it all went well, especially if you look at the result, but also for me I think we had a good feeling during the race between us all, and we hope to do something similar at the Tour."

Not making the team is Michael Woods, who fractured his femur in Paris-Nice in March but rehabilitated in time for racing to resume. He announced he would move to Israel Start-Up Nation next season.

Tanel Kangert, who will move to Mitchelton-Scott also failed to make the cut, as did the team's usual road captain Simon Clarke, 14th in Il Lombardia, and Magnus Cort, all of whom were named to the long team in July.