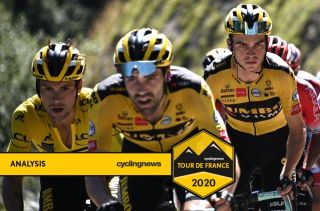 Richie Porte described the Jumbo-Visma team as the 'killer wasps' of the peloton during the recent Critérium du Dauphiné for the way they chased down attacks and dominated the racing, and they are expected to attack this year's race and try to challenge Team Ineos' dominance at the Tour de France.

The Dutch WorldTour team have lost Steven Kruijswijk after he crashed and fractured his shoulder at the Dauphiné, but Primož Roglič is expected to recover from his injuries sustained in a crash there, too, and so join forces with Tom Dumoulin to lead the team in yellow and black.

With Wout van Aert, George Bennett, Tony Martin, Sepp Kuss, Amund Grøndahl Jansen and Robert Gesink to help them, Jumbo-Visma have the strength and experience to at least go shoulder-to-shoulder with Team Ineos.

Here we analyse the strengths and weaknesses of each of the eight riders to understand how they will race the Tour de France, and how they could finally end Team Ineos' control of the yellow jersey.

The latecomer to pro cycling continues his ascendancy, and is arguably the favourite for the 2020 Tour de France.

After finishing on the podium of the Giro d’Italia and winning the Vuelta a España last year, Roglič has kicked on again this year, crushing the competition at the Tour de l’Ain before continuing that form into the Critérium du Dauphiné.

A crash forced him out of the race, and so there are question marks over how that has affected his build-up to the Grand Départ, but he seems on track to take on Egan Bernal and anyone else.

There is concern as to whether Roglič, who has ridden away from Bernal with ease in the past couple of weeks, has hit top form too soon, and whether he can maintain it into the Tour’s brutal final week. Time will tell. This is, after all, a unique season where preparation is tricky to judge, and Roglič is a rider who went into the Giro all guns blazing, only to fade late on.

Still, the Slovenian has learned lessons from that Giro and went on to win the Vuelta, proving he has what it takes to manage a Grand Tour and lead a team.

He has been so good so far that he’s earned his place at the top of the Jumbo-Visma hierarchy, although Steve Kruijswijk’s absence means it’s just him and Tom Dumoulin to lead the line now.

With his form, the strength of the team around him, and that penultimate-day time trial that it’s hard to see anyone else winning, he’s right up there in the favourite stakes.

Having not raced for 14 months, the 2017 Giro d’Italia winner can be afforded a slightly less explosive start to the rebooted 2020 campaign than Roglič.

Despite not grabbing the headlines in the same way, there was plenty to suggest that the Dutchman is well on track back to Grand Tour contention after his 2019 woes, and possibly even on track to compete for this Tour.

If the theory of Roglič hitting peak form too early holds water, then Dumoulin could be seen as timing his rise to perfection, having got better and better throughout a punishing week of racing at the Dauphiné.

Roglič sits at the top of the pecking order, but Dumoulin, in the absence of Kruijswijk, takes on even greater responsibility now.

Without question, Wout van Aert has been the star rider since the season re-start, winning Strade Bianche, Milan-San Remo, the Belgian time trial title and a stage at the Dauphiné.

However, it’s not the races he’s won that are most relevant here, but the ones he didn’t. Van Aert spent the rest of the Dauphiné pulling the peloton on the flat, through the medium mountains and even over high mountains. Comments from fellow riders painted a picture of a peloton staggered at the sheer strength of a 25-year-old who is yet to discover his limits on the road.

On this form, it’d be hard to deny him that chance, but Jumbo-Visma seem to be going all-in on the GC bid, and Van Aert has previously indicated he will be setting aside any personal ambitions to support that. If so, Roglič and Dumoulin couldn’t hope for a better all-round domestique. A true luxury.

Another rider who turned heads and dropped jaws with a sensational Dauphiné, Sepp Kuss starts the Tour as Jumbo’s most important mountain domestique.

When Ineos tried to shred the field on the Col de Porte, Kuss shepherded Roglič and shut down an attack from Bernal with almost laughable ease. When handed the freedom after Roglič's and Kruijswijk's abandons, he won the savage final stage with a quite remarkable performance.

On the basis of that Dauphiné alone, Jumbo-Visma, in their quest for Ineos imitation, have a rider who can remain in front of his leader for near enough the whole race, and it wouldn’t be a surprise to see Kuss snag a respectable GC result without aiming for one.

It’s worth pointing out that Kuss hasn’t just been picked on form. His spot in the Tour line-up was set from December, and crucial to it is his relationship with Roglič. He was there at the Giro when there were lessons to be learned all around, and he was there when the wrongs were righted at the Vuelta. The pair have experience together, they are said to love working with one another, and it should be a crucial partnership.

If Jumbo-Visma are going to be the new Ineos, they’re going to need more than one luxury domestique who could feasibly lead another team. Step forward George Bennett, who guided Roglič to the Tour de l’Ain title before using a few days of freedom to win Gran Piemonte and take second at Il Lombardia.

Unlike Kuss, the New Zealander wasn’t in the original squad line-up, but changed plans from targeting the Giro once it was clear that Laurens De Plus would need more time to recover from his injuries and had agreed to join Ineos.

The fact that Jumbo-Visma can just bring in a rider like Bennett says it all about their newfound strength in depth. The New Zealander is a pure climber who has finished in the top 10 of the Giro and Vuelta, and was having a great Tour in 2017 until he had to abandon.

You sense that Bennett would like more of his own opportunities in the future, but you can’t see it clouding his dedication to the team this year, after he even helped ‘block the road’ in sprint stages last year. He’ll have an even more important role this time around.

After a confusing couple of seasons at Katusha-Alpecin in which he tried to become a cobbled Classics rider, the German has found his late-career niche pulling pelotons for Jumbo-Visma.

Although the time trial wins haven’t come flowing back, he has looked strong and assured since joining Jumbo-Visma in 2019, and his ability to set pace on the flat has been pretty much unrivalled.

In a team with no shortage of climbers, Martin is the engine room, and you’ll have to get used to the sight of him, open-mouthed, forearms draped over his handlebars, dictating the tempo over the next three weeks.

The Dutchman is a stalwart of the team who used to lead the line in the Grand Tours, but he has now transitioned into a support role – and it’s one he appears to be relishing.

Gesink turned pro with the team way back in 2007, when it was known as Rabobank, and has a fifth-place finish to his name at the 2010 Tour, plus four further Grand Tour top-10 results.

He may not be as strong a climber now as Kuss or Bennett, but what he adds to the mix is a wealth of experience.

The Norwegian is the replacement for Kruijswijk, and an interesting one at that.

Jumbo-Visma were never going to find another GC contender at such short notice, but they could have called up another climber. Instead, they’ve tilted the balance of their team with Jansen – a rider similar in profile to Van Aert.

He’ll add to the engine room on the flat, but it’s no stretch to see him leading out Van Aert for a sprint or two, if the opportunity arises.

With no disrespect whatsoever to the 26-year-old, who is a real talent and very much on the up, the loss of Kruijswijk can only be seen as a heavy blow for Jumbo-Visma.